With great fanfare, I would like to congratulate Councilmembers John Wentworth and Colin Fernie for the first dumbass decisions of their Council careers.

Both, along with Mayor Jo Bacon, opted to pass over Greg Eckert for the Town’s Planning and Economic Development Commission.

I attended the commission interviews on Wednesday afternoon. Eckert and Vanderhurst gave the top two interviews and I had Brown over Grahek for the final spot.

Grahek is clearly smart and has a nice resume in engineering and architectural design. However, she appears green and lacking in local knowledge. When asked about Rob Mitchell and his proposed plans for the Lodestar property he has under contract (this is a story that has had front page coverage in this newspaper and one would assume that a person applying for a commission job would have a passing knowledge of current events), not only did Grahek have little clue about the issue, but she also needed an explanation of the difference between “hot” beds and “cold” beds.

The Lodestar question became somewhat of a litmus test for me. Of the eight candidates, four knew nothing about Lodestar and Kevin Green withdrew his application at the start of his interview.

By default, that left Eckert, Vanderhurst and Brown.

Speaking of commission appointments, Sandy Hogan was also fairly upset that Pat Agnitch was not given a seat on the Town’s Recreation Commission.

Council instead chose to appoint Clayton Mendel and Betsy Truax.

“I don’t want to take away from Clayton; he’s a nice guy … who has not attended many Recreation Commission meetings,” Hogan said. “But it would be nice to know why Colin Fernie and Jo Bacon decided [to appoint Clayton], rather than have the most professional Rec Commissioner that they’ve ever had, Pat Agnitch.”

Hogan alluded to Agnitch’s many “faithful” years of service on the Town’s Recreation Commission, as well her time as Assistant Director of Community Services in Beverly Hills, where she managed a $13 million budget and 50 full-time personnel, and her role as the Northern California Representative to the State Parks Commission.

She theorized that Council member Fernie and Mayor Bacon had overlooked Agnitch because of her opposition to the newly formed non-profit Mammoth Lakes Recreation (MLR). Both Fernie and Bacon have expressed support for MLR; both are serving on MLR’s Transition Board.

“Colin and Jo put Mammoth Lakes Recreation first and the Town second,” Hogan said. “This tells me that if somebody disagrees with them, as in the case of MLR, the personal will absolutely take precedence over the professional … I just lost a lot of respect for the both of them tonight.”

A run on aquariums

Several times last week, I ran into Deena Kastor scooting around town with her daughter, Piper. Andrew was out of town, so Deena was on full-time kid duty.

The final time I saw her was at Mammoth Pet Shop. She came in holding a baggie with a goldfish inside – the spoils of victory from the Gimme Shelter Carnival down the block. So Deena was naturally looking for an aquarium to house the new prize.

I casually asked the guy at the counter if the pet shop had been experiencing a run on aquariums and fish paraphenalia – I figured there had to be other parents in Deena’s predicament.

Absolutely, he said. “Mike [Mammoth Pet Owner Mike Munson] had to put a special order in this week.”

A call to Munson confirmed this. “There has been a ridiculously massive spike in business,” he said. “We’ve probably already sold 20 to 25 tanks and small aquariums, whereas normally, we might sell two or three in the same period.

Anytime somebody does a goldfish toss type of event, we get inundated … and no one warns us ahead of time.”

As for Piper’s goldfish, I got the rest of the story from Deena later in the week:

“Goldie the goldfish didn’t last 24 hours with us!  We brought her home after our visit to Mammoth Pet Shop and filled her large aquarium with filtered water, rinsed off rocks and fake greenery. Piper sprinkled the fish food on top of the water and asked to pet her. I said, ‘She’s adjusting honey. Let’s make sure she is not scared and then you can pet her.’ With a solemn ‘okay’ Piper watched her fish hide behind the greens. The next day she appeared a little limp and within the hour she was dead as a doornail (though I have no idea where this figure of speech comes from, so now will have to google it when I send this email).

Before Piper came home from preschool I flushed Goldie the Carnival Fish down the toilet, cleaned and put away any sign of the pet we so briefly had. I even cried; I like animals that much. Piper hasn’t even asked about the damn thing! She does however, keep pestering me to take her back to the Ferris Wheel. Makes being a dog owner seem so easy … except for the expensive food!”

“We want to see Skip’s Outdoor Market continue,” said Town Manager Dan Holler at Wednesday night’s Town Council meeting, “and we want to keep it in the downtown area.”

The Rudders had applied for a Special Event Permit for the weekly market, but Town staff had suggested a Facilities Use Agreement instead, as the event will continue for several months and is held within the public right-of-way.

Staff identified liability issues associated with the proposed event (as with any event open to the public and occurring on Town property), and requested the Rudders procure insurance coverage and indemnify the Town against liability.

According to the Town Council Agenda Packet, “The applicants have indicated that they are unwilling to either provide insurance or indemnify the Town.”

The Town therefore denied the Rudders’ request for a Special Event Permit.

Last week, as Skip’s Market proceeded in the parking lot of the Mammoth Luxury Outlet in spite of the lack of permit, the Rudders expressed concern that the MLPD might be coming to arrest them.

That threat failed to materialize.

“I think we can come to a resolution,” said Holler at Wednesday’s meeting. Town is now recommending several options, ranging from the Town assuming liability for Skip’s Market, to the Market moving to private property.

Council member Colin Fernie expressed his support for the Market continuing in its current location. “I think it’s of great value to the community, and it’s something we should be promoting,” he said.

The Rudders addressed Council, arguing for the benefit of the event to locals and visitors. Kathleen Rudder noted that in spite of inclement weather, both vendors and patrons turned out this past Wednesday.

Vendor Sara McConnell contacted The Sheet on Thursday to second Kathleen Rudder’s statement. “I was out there yesterday, along with three other vendors, in the rain,” she said. “And you know what? People came and shopped! Granted, it wasn’t my best selling day, but it really showed me the need for the Market, that people still came in the pouring rain.”

Like Dan Holler, Paul Rudder remained hopeful of a resolution regarding the Market’s liability issues. “When men and women of good will reason together, nothing is impossible,” he said.

Council member Shields Richardson agreed. “I couldn’t bear to see you both in handcuffs,” he quipped. 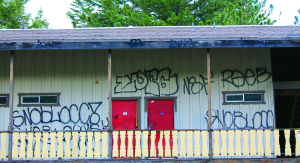 Vandals tagged the White Stag as well as La Sierra’s and a bridge on the golf course over two nights. Photo courtesy: Sheet staff.

Some tools tagged a few places in town this week, which doesn’t sit well with anyone. Personally, I flipping hate it when my news boxes get plastered over with stickers that can only be removed with a hair dryer.

So two takeaways for me.

1.) I hope they catch the bastards.

2.) Despite being bastards, the vandals may have done us all a public service by pointing out that the buildings in question need to be removed. You can’t just let buildings stand there to rot for nearly a decade, because it invites precisely this type of response.

I am writing to raise public awareness of the opening of two board seats on the Southern Mono Healthcare District Board of Directors in November.

Potential candidates to fill these two openings must be qualified residents of the District to run for office. It is a five-member, publicly elected board that governs the District which owns and operates Mammoth Hospital and Clinics. The board meets monthly on the third Thursday of each month and the term of office is four years.

Mammoth Hospital’s mission is to promote the well-being and improve the health of our residents and visitors.  The function of the board is to set policy and strategic direction for the District, allocate and protect resources, engage in outreach to understand community needs, and provide oversight to and monitor the performance of the Chief Executive Officer.

On behalf of the Southern Mono Healthcare District Board of Directors, we invite interest and applications from any resident of the District with a desire to serve the community and a passion to see our hospital and clinics thrive in the new era of healthcare reform.  Contact the office of the Clerk – Recorder – Registrar, County of Mono, to obtain filing papers and return them before August 8, 2014.