Bill Bramlette stands outside of the Old House where many of the activites during Saturday’s sesquicentennial celebration will take place. Photo courtesy: Angela Evans.

Historic Benton Hot Springs is celebrating its sesquicentennial (150) anniversary on Saturday, September 6, with a full day of events including historical tours and live music.

Benton was an early mining town that supplied five mining districts in the area during the silver mining boom of the 1860s.

“When the first mines opened, they would bring the livestock up the Owens Valley and right through Benton,” said Bill Bramlette, whose family’s trust owns and operates Historic Benton Hot Springs. “It really was a travel corridor from southern California if you were going to bring livestock in to all the mining camps.”

Bramlette and his wife, Diane, run Benton Hot Springs with 16 hot tubs at three historical houses for rent, a Bed and Breakfast at the Inn at Benton, and a campground with 10 different sites.

The first building in Benton was a bathhouse in 1863, “before the town actually even got it’s start,” Bramlette said. “It was built for travelers and miners.”

The hot water from the spring never dries up, and “it’s pretty much the same flow and temperature as it was 140 years ago,” said Bramlette.

“It’s beautiful water,” he added. “You won’t smell any sulfurs or any kind of minerals. It’s got great drinking water properties. It brews great beer.” 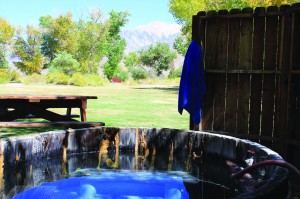 The town of Benton peaked between 1876 and 1879, with four hotels, three general stores, livery stables, two butcher shops, ten bars and two breweries all supported by the hot spring.

Aproximately 600 people lived in Benton during its peak, although the town supported about 2,000 people on the surrounding ranches and mining claims. Although nowhere near the size of Bodie, Bramlette noted that Benton came before Bodie.

In fact, the man who Bodie was named after was partnered with the first resident of Benton, E.C. Taylor. Taylor settled in Benton in 1861, building a small cabin that is still on Bramlette’s property. Bodie and Taylor formed the Bodie Mining Company, and Taylor moved livestock through the valley. Taylor was famous for a shoot out with local Native Americans who surrounded his cabin for two days.

“They asked him to leave, but he wouldn’t. He killed 10 of them and they killed him,” Bramlette said. “So he never made it rich like his partner.”

Morrison ran the General Store, Post Office and Wells Fargo Agency in Benton until he was killed in 1871. He was part of the 10-man posse of Sheriff George Hightower in Benton who tracked the convicts from Nevada State Prison in Carson City. The posse followed the convicts into the canyon surrounding what is now known as Convict Lake, where Morrison was shot and killed. Morrison’s body was recovered and he was buried in the Benton Cemetery. Mount Morrison west of Convict Lake is named after him.

Meanwhile the town of Benton was most likely named after Senator Benton from Missouri, a “big proponent of using silver for monetary standard,” Bramlette said. Benton’s daughter Betty was married to Jon Fremont of the Fremont-Walker expedition of 1845, the first ones to discover the area.

Eventually, Benton developed its own silver mill and miners would bring their material into town to melt the silver out of the ore. “Over the course of 20 years there was probably $10 million of silver moved from Benton through Wells Fargo agency,” he said.

By the middle of the 1880s, “things really got tough here because silver plummeted in terms of its value.”

Soon after, the Carson and Colorado Railroad also minimized the need for the town, as supplies were able to move through the area faster. And one of the major mines flooded and had to be closed down.

Many people began moving to Mammoth, as the Lakes District mining exploded around the same time. “But it didn’t last long in Mammoth and it all burned down,” Bramlette said. “The same thing happened here.” In 1885, most of the buildings on Main Street in Benton burned, including Morrison’s store.

But the town survived, and Bramlette’s great grandparents moved to Benton from Little Lake in 1928, purchasing the Wells Fargo Agency General Store, building a motel and continuing to buy up all the property around Benton—1,255 acres, to be exact.

“My great grandfather ran it as a resort more than anything,” Bramlette said. Celebrities like Fred McMurray would come and get away from Hollywood, enjoying the hot baths and remote location.

Now, Historic Benton Hot Springs is a non-profit corporation that Bramlette started just a few years ago. “From my grandparents, I was left with the responsibility to take care of all of this,” Bramlette said. “What I’ve got to look at in the long run is how do you preserve and take care of a place like this?” Bramlette said. He hopes to eventually turn everything over to the non-profit so that it is responsible for upkeep and preservation.

Bramlette took the first steps towards conservation by setting up a conservation easement with Eastern Sierra Land Trust for 75 percent of the property, which prevents subdivision and development indefinitely. But the buildings around Main Street need more of an historical preservation mechanism.

“That really is the challenge that is what the non profit purpose is here,” he said. “To help with the planning to go forward to find sustainable and compatible income generating opportunities in line with our overall mission of taking care of property.”

The sesquicentennial celebration on Saturday has a full schedule of events rom 9 a.m. until 8 p.m., including tours of the hot spring, a walk around Old Benton, historical tours of the Wells Fargo Agency building, live music, kid’s games, and a Benton Talks segment, featuring Ed Delany, who wrote the most recent book on Morrison, and Jake Saulque, the chair of the Benton Paiute Tribe.

The Wells Fargo Agency building will be open for the first time in years on Saturday for tours. Bramlette has set it up reminiscent of when his great-grandparents first operated it in the 1930s and when both of his grandparents ran the store in the 1950-60s, putting in a gas station, diner and bar.  “As a little kid, this is where we had dinner,” Bramlette said about the diner counter. His grandmother sold the liquor license to Sam Walker, previous owner of Whiskey Creek in Bishop sometime in the 60s and the building has been used as storage, until Bramlette set it up for the anniversary party.

“We’re rustic, we’re remote and that’s what a lot of people are looking for in getting away from the urbanization that most people live in today,” Bramlette said of the Historic Hot Springs. Anywhere from 25,000-40,000 visit Benton each year, renting either the houses, tub sites or staying at the Bed and Breakfast. “A good share of those people, probably 50 percent at least, are repeats. People come here specifically because we are very unique and we are out in the middle of nowhere. They don’t care if they have cell service or not they just want to get away.”

Bramlette said the tubs are booked every night and he drains and cleans the tubs in between users. The water temperature at the spring is 139 degrees Fahrenheit and travels 250 yards down to the tubs where the temperature is 120 degrees. Bramlette has set up a spraying system to fill the tubs in order to cool the water down. The bigger tubs are $50 a night, smaller tubs are $40 and it’s $30 for one person. Reservations can be made at historicbentonhotsprings.com

“We keep it extremely quiet,” Bramlette said. “So that everyone can enjoy the peace of it out here.”