Dr. Mike Karch is moving away.

But he’s not going anywhere.

They plan to move to Virginia not only to be closer to family, but also to raise bison and goats. Karch also talked about growing hydroponic grass in a greenhouse to provide feed for his bison during the winter months, becoming increasingly animated as he spoke about all his plans for the farm.

Most important, he talked about it being a “family project” – about having the opportunity to slow life down a bit; to connect.

This will constitute two-thirds of his life.

But for the other ten days a month, Karch plans to commute to Mammoth to continue working at the hospital, doing total joints and trauma work. 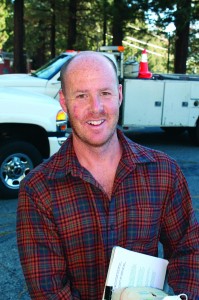 As Karch said, he’s not interested in building a new practice in Virginia.

He will necessarily have to scale back on some of his other interests. He has resigned as CEO of Mammoth Medical Missions, and has also turned over the Mammoth Biathlon to Clayton Mendel and John Manzano.

As he observed re: Mammoth Medical Missions, to paraphrase, ‘a non-profit CEO needs to fundraise, and that’s not really something I like to do.’

He is still keenly interested in disaster relief operations, and will still participate in that area for Mammoth Medical Missions.

I cited a recent story in the Wall Street Journal which quoted a study claiming that only 6 percent of doctors really like their jobs. Is that true? I asked.

Karch said yes. He then told a story about his grandfather getting him a subscription to the Harvard Business Review after he finished college. He said he’s been reading the magazine religiously for the past 20 years or so. One consistent management principle he’s observed over the years is the following: Keep your highest-trained personnel working in the area they specialize in. Backfill the remaining work.

As Karch says, he’s happy as a pig in you-know-what when he’s in the operating room. He’s less happy when he’s got to submit a third round of paperwork to some insurance company just so he can get paid.

Karch will give the keynote address at the Mammoth Medical Missions Free Keynote BBQ on Sept. 9th at Eagle Lodge. The BBQ kicks off the four-day Mammoth Mass Casualty Seminar.

Eric Wasserman is also moving … across town. Wasserman has left Edward Jones, and has set up a new office in Sherwin Plaza III (in Zila’s former dental office). He is now with Wells Fargo Advisors.

In his new role, he is a sole proprietor as opposed to an employee. The advantage: “I’m free to invest in many more platforms, with more choices. I have the freedom to create customized solutions for my clients.”

His clients have the option of staying with Edward Jones (which is in the process of seeking a permanent replacement), or they can choose to remain with Wasserman.

“It’s as simple as the stroke of a pen,” he said. There will be no transaction fees or other costs for those clients who wish to switch.

Prior to moving to Mammoth, Wasserman served as Senior Vice-President for the Magnet Fund, a hedge fund based in Northern New Jersey. 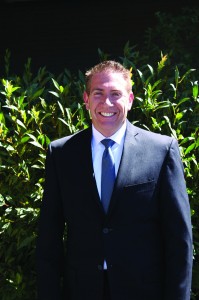 He was also a frequent guest on CNN Financial’s “The Money Gang” roundtable talk show program.

During the winters, he also moonlighted as a part-time, weekend warrior ski instructor at Mountain Creek in New Jersey.

Mountain Creek was also owned by Intrawest at the time.

And that connection is what led him to Mammoth. He abruptly quit his job in the winter of 2002 and went on a roadie, catching the Olympics in Salt Lake City before coming to Mammoth for the latter part of the season.

And it may have amounted to just that – a few months in Mammoth and a handful of memories – except for that one day in the lodge where Wasserman said he thought he heard someone call his name.

So he turned around … and in the process, knocked his skis into MMSA CEO Rusty Gregory.

“I can help you,” were the words that popped out of Wasserman’s mouth.

“Rusty looked at me as if I were crazy, like I had nine heads,” laughed Wasserman.

“I can help you with that big hole in the ground [the North Village],” Wasserman elaborated, explaining that he had an extensive background in finance.

The next week, Gregory and Mark Clausen conducted a job interview on the slopes. Wasserman subsequently got a job doing financial analysis on special projects for MMSA.

He opened the Edward Jones office in September, 2003.

Rock ‘n roll and whiskey … we’re just two dogs and an ex-wife away from a Toby Keith anthem.

The inaugural Mammoth Rock ‘n Rye event will take place Sept. 12-13 in the Village at Mammoth. It is the brainchild of Heather and Rovert Schaubmayer.

According to Robert, he and his wife were on a roadtrip about three years ago kicking around event ideas and “Rock ‘n Rye” came up … and then disappeared. When you have two children less than a year old, thoughts tend to disappear.

But three years later, when encouraged by Neighborhood Company Executive Director Robert Richards to keep the summer momentum going and think of an event which could fill the Sept. 12-13 open weekend, Heather recalled the Rock ‘n Rye idea.

Clocktower and Lakanuki will operate a full-service bar on-site , which will include five rye-inspired specialty cocktails.

The music portion is described as “Americana” by Robert – “heavy country, rockabilly.”

Can I say he said this wryly?

A portion of the proceeds from the event will go to Rhiannon’s Kids Fund. The mission of Rhiannon’s Kids “s to improve the healthcare of children in the Mammoth Lakes community by providing financial support for families to access medical services that cannot be obtained locally.”

Evan Williams Bourbon and Michters Whiskeys have each donated a pair of Community Skis to be given away in the raffle.

The Town will provide late-night trolley service from the event on both nights.