With Fat Bikes, every season is in-season.

As winter finally hit this week, most people put away their mountain bikes and brought out their skis. But for members of Fat Bike Mammoth, a local year-round off-road cycling club, the fun is just beginning. With large volume and low-pressure tires, fat bikes are made to ride in snow and sand, and represent the largest growing portion of the mountain bike industry.

Alan Jacoby, an avid adventurer and cinematographer by trade, first bought a fat bike in 2012 after reading blogs about the sport. “I saw pictures of all these people riding groomed snowmobile trails or cross country trails and it just looked so fun,” he said. “It’s another recreation activity to do in the winter when you don’t feel like skiing.”

While riding up the free side of Lake Mary road that winter, Jacoby met Eric Hunter and Jodi Melton, two other fat bikers. They started riding together regularly, until a U.S. Forest Service (USFS) ranger stopped them.

“We were riding up in the Lakes Basin and then we found out it was illegal. But it’s legal everywhere else except in the Inyo [National Forest] because of an old forest order,” Jacoby said.

The order, dated December 1992, prohibits wheeled vehicles on any groomed snow trails in the Inyo National Forest, specifically including bicycles, as means of minimizing impact. However, fat bikes weren’t developed until 2005, and float on top of packed snow like other winter recreation activities such as snowshoeing and cross-country skiing. 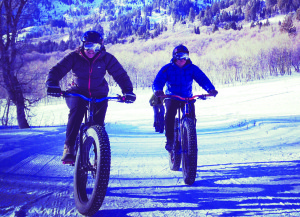 And so Fat Bike Mammoth was born, focusing its efforts on overturning the USFS order and gaining access to groomed trails. “It’s not that the Forest Service is against fat biking,” Jacoby said. “They just are against the workload it would take to amend the order. It’s definitely not high on their priority list.”

Currently, the USFS is revising its Forest Plan and conducting a National Environmental Protection Act (NEPA) analysis of over snow vehicle (OSV) access, both of which could have positive results for fat biking, although they don’t specifically address the order. “We could gain access in the next couple of years,” said Jacoby.

Until then, Fat Bike Mammoth has shifted its focus towards alternative methods of grooming, and gaining approval to ride on private property. Although the order bans fat bikes from groomed trails, the USFS does allow them to ride existing un-groomed trails such as McGee Creek Road, Sherwin Creek Road, or the meadow beneath Mammoth Rock Trail. These trails “are widely used by snowmobiles and snowshoers, but they’re not groomed,” Jacoby said.

Last winter, Jacoby and Hunter pulled a cross-country “kiddie sled” behind snowshoes along the uptown/downtown loop beneath the earthquake fault and rode their fat bikes all winter. “It forces you to explore when you can’t access the normal trails,” Jacoby said.

And the bikes are relatively safe. “Fat bikes have a much faster stopping power than a cross country skier,” he said. “And on average we go slower. We cruise at about 6 mph.”

Jacoby said fat bikes are an untapped market in Mammoth, where visitors and locals are always looking for more recreational options. Currently Footloose Sports sells floor models and Mammoth Outdoor Sports rents them. But the industry has yet to take off, given the level of regulation that still exists.

“You really have to be an adventurer and really seek it out, which is a turn off for most people. They just want easy access,” Jacoby said.

The club would like to organize more group rides and events and is “actively trying to utilize private property to ride our bikes on where we don’t have to deal with the legalities or special-use permits,” he said.

Around the country, more and more cross-country ski resorts and golf courses are opening their services to fat bikes during the winter. Over 28 different Nordic resorts allow fat bikes on their trails in some capacity, including Methow Valley, the largest cross-country center in the U.S.

“They have really been opening their eyes to fat biking because of the revenue it brings in,” Jacoby said. “There may be some potential with Tamarack and places like Snowcreek and Sierra Star [golf courses].”

The golf courses, in particular, could provide an untapped revenue source, as “it is terrain that is not utilized at all during the winter, but could potentially be epic fat biking,” he said. And maintenance would be minimal, with a snowmobile grooming the existing golf cart paths.

Fat bike sales have tripled in the last three years, and large corporate sponsors, such as Redbull, have begun hosting events. The sport is also catching on in Europe, where the Swiss resort of Engleberg is hosting an inaugural fat bike race in January 2015, closing down specific ski trails for the event.

Fat Bike Mammoth, with over 65 members in its Google Group, is in the process of becoming a supporting organization of International Mountain Bike Association (IMBA). However, Jacoby doesn’t plan on formally incorporating or activating membership dues. “That just doesn’t work in Mammoth,” he said. The group meets approximately every other month.

According to Jacoby, Mammoth could be “a fat biking mecca” with its pristine network of trails. By exploring other options outside of trails protected by the USFS order, “this could be a tipping point year,” he concluded.

With it’s growing popularity, and assuming Mammoth sees more snow, watch out for more and more fat bikers on trails this winter.