It’s fair to say few outside of the scientific community may ever have heard of “albedo,” but as it turns out, understanding albedo is crucial to our understanding of the properties of snow and what drives snowmelt.

And anything that drives snowmelt is of concern to the Eastern Sierra.

On Tuesday, Dr. Jeff Dozier delivered a STEM (Science, Technology, Engineering and Mathematics) presentation at Cerro Coso Community College on albedo, which is the fraction of solar radiation (sunlight) reflected from snow and ice away from the earth. The amount of solar radiation the snow reflects varies depending on factors such as dust and soot. The higher the albedo, the more reflectance; the lower the albedo, the greater the absorption of the sun’s energy. 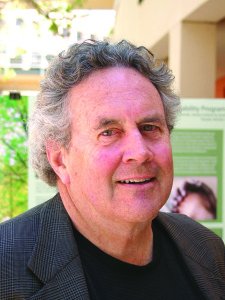 Dozier is a Professor at the Bren School of Environmental Science & Management at the University of California, Santa Barbara, where he served as the founding Dean. He holds an MSc and PhD degrees in geography from the University of Michigan, and studies snow hydrology at Mammoth Mountain.

He also acted as a consultant to the Disney film “Frozen,” helping animators accurately render snow.

Among the things Dozier said he told animators: “Snowflakes all have six sides … And you can’t set off an avalanche with a scream or a yodel.”

He added that after that last bit of advice, “We had the idea that something came out of the script.”

At Tuesday night’s lecture, Dozier explained why snow is white—light enters transparent ice crystals, bends, and mostly passes through, transmitting all the colors of light equally and not reflecting them back to the eye.

However, if a photon (a microscopic particle of light) happens to enter snowpack polluted with dust or soot, rather than passing through, it may instead hit a grain of dust and get absorbed. This absorption of energy represents a decrease in albedo.

“Earth’s climate, seasons, and snowmelt are driven by absorbed solar radiation,” Dozier explained. A small change in albedo can cause a bigger change in absorption, which makes a big difference in terms of what happens to snow.

Dozier used the example of the San Juan Mountains in Colorado to illustrate his point. Wind blows dust from the Colorado plateau up into the mountains, coating the snowpack with dust. As a result, because light particles (photons) entering the snow are more readily absorbed, the snow disappears about three to five weeks earlier when it’s dirty than it would if it were clean.

That dust is the product of grazing, which began in the 1800s.

While Mammoth doesn’t have its own plateau, snow in the surrounding mountains is still affected by dust. Dozier explained that albedo trends downward as the season progresses, owing in part to springtime snow becoming patchy and mingled with dust.

“This year, the snow has been patchy the whole time,” Dozier said. “There’s a lot of dirt in the snow.”

In other parts of the world, soot is of greater concern. Dozier showed photographs of the change in the Cho Oyu and East Rongbuk glaciers between 1921 and 2009/2011.

“There are increasing amounts of black carbon and dust in ice cores,” he said. In some areas, the resulting decrease in albedo has a greater impact than climate change, which is simultaneously raising the earth’s temperature.

Here in Mammoth, he alluded to ongoing studies performed by the Airborne Snow Observatory (ASO), a project led by Dozier’s former graduate student Tom Painter. The ASO is a repurposed plane equipped with LiDAR (a remote sensing method that uses light in the form of a pulsed laser to generate three-dimensional information on surface characteristics), spectrometer, GPS, and an inertial measurement unit that tracks the pitch and yaw of the aircraft. Together, the LiDAR and spectrometer, which measure both topography and reflected sunlight, create a three-dimensional map of the snowpack.

With data gathered by the ASO, “We can tell not only how but why the albedo is changing,” Dozier said.

Meanwhile, Dozier’s own research is ongoing at Mammoth Mountain. He said the current instrument station has radiometers pointed at both sky and snow to measure what radiation comes in and goes out, as well as instruments under the snow to measure snowmelt.

Dozier noted that the instruments are sensitive. “If you’re interested, ask me for a tour,” he told the audience with a laugh.