He was an accomplished aeronautical engineer, avid skier and outdoorsman and a true man of Mammoth

John first discovered and fell in love with Mammoth Mountain in the early ‘50s, while stationed at Edwards Air Force Base.

In the early days, he and his friends would make the long drive north at the end of the week. Then, at first light, they would lift their skis onto their shoulders for the hike up the mountain, and ski until it was time to head back south.

He bought a piece of land in Mammoth in 1956, built a small A-frame cabin on it in 1960, and from that day forward Mammoth became the home to which he always returned. 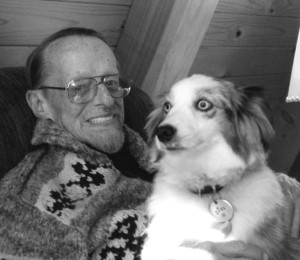 In 1998 he and his wife Andree moved here permanently.

John was born in Dubuque, Iowa in 1930, the youngest of four children of John Rider and Eunice Lyon Wallis. He was six years old when his mother died of pneumonia. It was a defining moment in his family’s life and, in fairly short order, his two older brothers and his sister all followed the family tradition of military service and shipped out for the European Theater of  WWII.

Alone at home with his proud but grieving Dad, John was –even then- a young man of not too many words. But the solitude he experienced then,  and the focus and determination it inspired, were exactly the qualities that would make him such a perfect candidate for the intensely disciplined, analytical and creative world he eventually entered – of high performance, highly classified, aircraft design.

After graduating from MIT in 1952, he joined the Air Force and was assigned to the Flight Test Center at Edwards Air Force Base. The work he did there led to him being hired into Lockheed Martin’s Advanced Development Projects Unit, also known as Skunkworks, which built the A-12 Blackbird spy plane for the CIA, the SR-71 for the US Air Force, and the F-117 Nighthawk Stealth Fighter.

John was a flight test engineer and flight test manager for all these planes, which were designed and tested in the total secrecy of Groom Lake, Nevada,  also known as Area 51.

At the time of his death, John and Andree had been married for almost thirty years and John had been welcomed into the lives of Andree’s children Kevin Kelly, Marieanne Burley, Sean Early and their children and spouses. In addition to them, he is survived by his son John Rider Wallis III, his nephew John William Wallis and nieces Renee Wallis, and Isabelle and Suzanne Badoux.

John accomplished so much, lived so richly, worked at the highest levels of his field, but still found quiet comfort in the simple aspects of life, family and nature. A celebration of John’s life will be held on June 21.