“Every writer begins to be a writer by first being a reader,” said author Molly Gloss at the Mammoth Lakes Library on Wednesday. Gloss spoke to a crowd of fifteen about the mythology of the American West, particularly the difference between the roles of women in the American West in literature and the actual role women played in the western frontier.

She described a childhood spent at the library, as her family was too poor to own their own books. At the age of 12 she began reading cowboy novels—her dad’s favorite—and never stopped.

“You had to pretend you were a boy to really enjoy those two gun cowboy novels where violence is the main part of adventure,” she said. Women were usually portrayed as homemakers and “reluctant pioneers bearing up against suffering.”

By her thirties, Gloss wanted “to write a book I could not find in the library. A Western with a woman holding up the center,” she said. 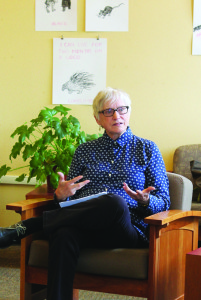 To write her first novel, Jump Off Creek, published in 1989, she researched women in the American West by reading their diaries, memoirs, and histories. Although she had never read about a woman homesteader in literature, by 1910 one in five homestead claims were filed by women through the Homestead Act of 1862, which gave women equal claim to land. Gloss discovered that single women traveled to the West for the same reasons as men—for adventure and independence, escaping from previous lives in the East. And they traveled around the West by themselves without fear of being attacked.

“I began working out the difference between women and men on the frontier; the heroism of normal life versus the heroism of conflict and conquest,” Gloss said.

Through her research, Gloss also discovered that between 1880 and 1920 several female authors had published popular western romances featuring strong female leads that were able to maintain some sort of independence despite marriage and raising children. “These spunky heroines were largely forgotten as men’s standard for what a Western hero was became the standard. This segued into the movies, which is where we get our ideas of the West from now,” Gloss said.

“The myth of the West defines who we are as Americans and as a people,” Gloss said. “There are still plenty of cowboys in outer space and downtown. It’s how the rest of the world thinks of us and how we think of ourselves. How can we really know who we are if we leave out half the population?”

Since the publication of her first novel, Western genre is experiencing a renaissance “spurred by women’s stories,” Gloss said. “Men’s stories have been told and retold until there’s not much left to discover. But there are endless stories to be explored about the women of the West.”

Gloss is a fourth-generation Oregonian and lives in Portland. Her novels have won several awards including the Oregon Book Award and the PEN West Fiction Prize.

She has written five novels about women in the American West, including Falling from Horses and The Hearts of Horses, which can be purchased at the Booky Joint in Mammoth or leased from any Mono County library.

The Mammoth Lakes Library hosted Gloss as part of a grant through National Endowment for the Arts Big Read Program, focusing on the American West. For the month of May, the Mono County Library is focusing on True Grit by Charles Portis, with a variety of western themed events.

Join the book discussion of True Grit on Saturday, May 16 at the Mammoth Lakes Library at 2 p.m. And listen to Mono County Historian Kent Stoddard give a brief history of the Sheriff’s Department at the Bridgeport Library on May 27 at 6 p.m.