Given that it was Katie’s birthday on Wednesday, and given that I’m the nicest employer ever, I had her take the night off and covered the Mammoth Lakes Town Council meeting myself.

Anyway, I’ll try to sum up the essential takeaway of six hours of Council deliberations in about 300 words.

During the pre-meeting, tentative FY ‘15-16 budget workshop, Town Manager Dan Holler and Finance Manager Cyndim Myrold defended their assertion that the Town shouldn’t yet make any adjustments in the anticipated $11.6 million in budgeted TOT (Transient Occupancy Tax) revenue for 2014-2015.

They project this year’s total budget deficit at just $131,000 right now, not enough to pull the fire alarms apparently.

Councilman John Wentworth addressed staff and said, “I’m assuming we don’t have a lurking structural issue,” in regards to the budget.

He was told not.

But then … the numbers began to start lurking. Town Managwer Dan Holler said he thought $11.3 million was a realistic TOT number for this year.

How did he get to $11.3 million. Probably by taking the year-to-date number ($9.6 million) and projecting $1.7 million for the April-June period, which is what we did last year.

Here’s the problem with that rationale. Last year, we received about $662,000 in April TOT revenue.

At the meeting yesterday, I ran into MLT’s John Urdi at the back of the room and he told me April was looking pretty dismal and he thought the number would come in around $375,000 or $400,000.

Urdi also believes that June will continue to trend upward as it has the past several years, but even factoring in a June at $100,000 over last year (an optimistic increase of approx. 15%) and a flat May (unlikely), we’re still looking at an April-June period that’s tracking nearly $200,000 less than last year.

Which means that TOT number is going to come in at $11 or $11.1 as opposed to $11.6. And your deficit is surging past $600,000. This stubbornness to look at real numbers (in evidence before when it came to moving the ice rink) is a troubling, troubling trend.

Mr. Wentworth … it may be time to call Houston.

According to our Charles James, the Inyo Register’s witch hunt of Terry McAteer has been rejoined (see story page nine). According to James, there were three Register staffers at Tuesdays’s ICOE Board meeting, answering the question of how many people it takes to change a light bulb over there.

At the Inyo Associates Dinner on Monday, held at Mountain Rambler Brewery, I ran across two guys from Tasmania, Michael Higgins and Chris Devenish. They are touring the States for about two weeks, and have a few objectives.

1.) They wish to visit areas that mirror some of the challenges theyb have back home, namely, transitioning from a resource-based economy to more of a tourism-based economy.

2.) The pair plan to attend a gathering of the U.S. Skeptic Society in Pasadena the weekend of May 30. The topic: In the Year 2525. Speakers will include Lawrence Krauss.

Sheet: But you guys don’t seem like terrible skeptics.

I knew I liked these guys. 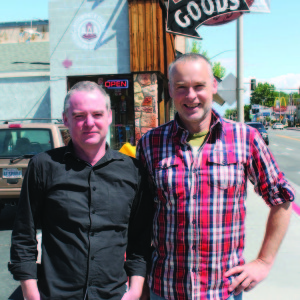 Michael works for what’s known as a “Community House.” 34 such houses exist in Tasmania. The easiest explanation of community houses are that they serve as the de facto first rung on the social safety ladder. Their goal is to support people and families and build community. Chris is a member of the Board of Directors.

Some things Higgins and Devenish are promoting back home are micro spaces [for small business people who wish to gather and have a place to work] and community gardens.

They noted that In Tasmania, a high minimum wage has discouraged employment and made service poor.

An interesting note: Tasmania has received a lot of climate refugees of late, since Tasmania is not projected to be terribly affected, or not as affected by climate change.

The capital of Tasmania is Hobart. The Mona Museum has become a major tourist attraction which it’s estimated 30% of all tourists visit. A man named David Walsh invested $200 million in the museum.

Tasmania, pop. 500,000, spends $4 million a year in tourism marketing, It draws about one million visitors/year. The tagline: “Get Behind the Scenery.”

According to both, the government still thinks the future is in digging holes and logging, and there’s not much of a vision besides that. Nevertheless, the Green Party hasn’t grown in the past decade. They think it’s because the entrenched politicians have the corporate backing to sway the electorate.

Both would be more than happy to foster a sister community-type relationship with the Eastern Sierra.