About a month ago I received a call from a woman named Jean Courtney who lives in Bridgeport. She told me she was the owner of the Sportsmen’s Bar and Grill and that she was looking to place a classified for some waitstaff help.

She went on to tell me that she had traditionally gone through a recruiter to hire staff, but they had started sending younger gals who kept quitting their jobs and running off with the customers.

She was a hoot. I had to meet this gal.

So I drove up to Bridgeport on Wednesday, and spent an hour with Jean.

While she’s reached an age where women don’t like to talk about age (and when I tried to snap a photo, she would only stand so close to the camera) you can tell that Jean Courtney was one beautiful woman in her heyday.

She grew up in Lynwood, Calif. She owned her first restaurant by the age of 16. This is not a misprint. She was working at Pick’s Restaurant for Mr. Pick, who one day up and told her that he was moving to Santa Monica to open a new place … and that he had arranged with her parents to sell Pick’s to her.

Why? Well, Pick had noticed that Jean was the only waitress who, if things got busy and she didn’t have time to write it down, she’d just serve the coffee and take the dime and put the money in the till. 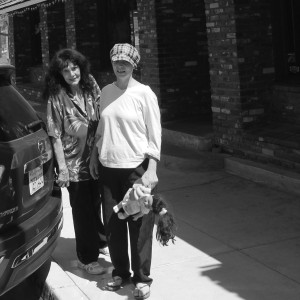 The other gals would put the dime in their pockets.

“I knew the man upstairs was watching me,” she said. She prides herself on her honesty. As for the man upstairs, this was a refrain in our conversation. Jean is not a deeply religious person, and yet, she says, “God runs the restaurant.” (More on this later).

Jean ran the restaurant for a few years. She had as many as ten employees. She married young to a law enforcement officer named Jess. While she was pregnant, he told her one day he’d taken a job in Mono County

Until she could make arrangements to move, she visited her husband every week via the Greyhound Bus.

Ultimately, Jean was offered the choice of living in either Mammoth or Bridgeport. But Mammoth was nothing more than a single road and a gas station. Bridgeport, by comparison, was a metropolis. So they passed up the chance to buy a 28-acre parcel in Old Mammoth. Instead, she bought the Sportsmen’s from Jim and Edna Nicely. She’s owned it for more than 60 years.

This is how beautiful and charming Jean Courtney is and was. In that era of the late ‘50s and ‘60s, all manner of movie stars and musicians would drive through Bridgeport, because that was an era where movie stars actually traveled and acted like regular people. Both Jack Benny and Tom Jones, passing through town, stopped in and ended up inviting her to their shows in Las Vegas.

John Wayne? When he was shooting a film on location in Bodie, he asked Jean to bring him lunch one day. He wanted her famous chicken. So Jean prepares the meal and sets out for Bodie, but … the road to Bodie is rough and her car breaks down and she ends up getting there 90 minutes late.

The director comes rushing up when she arrives and starts to give her the business. You’re killing the shoot, he says. Wayne won’t work until he’s had his lunch. He won’t return to the set.

Then the Duke saunters up. He doesn’t mention a thing about her being late. All he says is, “Did you bring the chicken?’

Then they went off, the two of them, to a private little spot where John Wayne liked to take his lunch.

Jean says the heyday of Bridgeport was in the ‘60s and ‘70s. Her heyday by coincidence. She says when she moved to Bridgeport she used to put on heels and a dress to go to work, but “they [the customers] hated it. So she transitioned quickly into Levis and braids.

One year, she brought in a Christmas tree. It had a beautiful, pungent Christmas smell.

“Every time I did something, they just hated the change,” she laughs.

But they loved her. She was the life of the party. She’d get to the Sportsmen’s and the place would just start … happening. “I made a game out of it,” she says.

The offers of marriage were ceaseless. As we were talking, her granddaughter came by the table to tell Jean she was leaving to head back to Portland, Oregon. She said she might spend a night in Eugene.

“I used to date a man who owned most of Eugene,” said Jean matter-of-factly, with no sense of bombast. The men were always hanging around.

She only married once. Never remarried. Has two children from the marriage. Gordon (and wife Debbie) who now own the Sportsmen’s, and a “five-star” daughter Debbie who lives in Fort Collins, Colorado.

She likes what her son has done with the place. There are all sorts of artifacts. When a local contractor, Wayne Long, died, he donated his fishing boat to the bar. It’s tucked into a cranny of the ceiling now. There’s a skeleton in the boat holding a fisbing rod.

For the past 18 years, Jean has heroically cared for a niece, Connie, who is developmentally disabled. In a way, it’s her service to God for all the gifts he has bestowed – the looks, brains, good fortune. As she says, over the years, “I was God’s pet … not that I deserved it.” She said it was almost uncanny. One cook would walk out and then five minutes later, another cook would walk in. Or there was the time where she was running a little short of cash and she goes upstairs and sees that Connie has ransacked her closet … but in the process had found a deposit bag filled with money that Jean had somehow misplaced six or seven years before. He always provided.

There have been medical issues. There were times her daughter was told that Jean was gone.

As for the Bridgeport of today, she acknowledges that times are pretty rough, but what sustains Bridgeport through it all is its authenticity. Visitors love the small town feel. “If you tried to make it fancy, it wouldn’t work,” she said.

She is also grateful for the 300,000 people Bodie attracts every year.

If you get a chance, stop in to the Sportsmen’s and say hello. As you’ll quickly discover, Jean Courtney’s still got game.

And from Vane’s desk …

A new Mammoth Lakes Quality of Life Ordinance could help mitigate some of the detrimental effects of transient rentals. Many who oppose an expansion to the Town’s current single family rental program have cited issues with noise, trash, parking, and safety.

Per Town Council’s request, staff returned to Council on Wednesday, July 15 to present a proposed ordinance that would address these issues.

The new ordinance would require exterior signage marking transient rentals (signage would include contact information), and would potentially raise noise violation fines from the current $100, $200, and $500 structure, to a $500 to $1,000 structure.

As for the issue of transient rental occupants illegally disposing of solid waste, Senior Planner Sandra Moberly said Town staff is working to address that issue by ramping up enforcement of the Town’s current Solid Waste Ordinance.

The new Quality of Life Ordinance could also potentially require inspections for transient units, although Moberly said that inspections “could be onerous … We have 4,661 Transient Occupancy Tax certificates that currently operate.” Inspections would be for newly licensed units only.

Moberly said that the Town could pay for the inspections by building the cost into an operation fee, or by using a renewal fee, although the latter would likely only cover a portion of the total inspection cost.

Finally, the Planning and Economic Development Commission (PEDC) recommended, and Council agreed, that each transient rental operator must have a local contact person available at all times to respond to questions and issues arising out of transient occupancy.

Town Manager Dan Holler called that contact person “the first line of defense.” He said the contact person would field questions and concerns about a particular transient rental unit and pass along information to the owner or to Mammoth Lakes Police Department, if necessary. The contact would be “like a property manager,” Holler said, and could be the rental unit’s owner, so long as the owner is local.

Town staff will bring the final ordinance back before Council on August 19.