Mammoth Lakes’ Huskies are beginning their new season with a new coach. Bubby Greene has stepped up, taking over for Marty Thompson. Thompson will still be running special teams.

Bubby Greene, born and raised in Mammoth Lakes, graduated from Mammoth Lakes High School in 2000. Greene played baseball, basketball and football during his four years of high school. He went to Orange Coast College and Battle College in Chico to play baseball. Greene’s father started the baseball program in Mammoth back in the ‘70s, as well as being a physical education and economics teacher. His mother was an Elementary School teacher in Mammoth. Greene moved back in 2005 after graduating college and he now works for Mammoth Hospital overseeing marketing and the Mammoth Hospital Foundation. 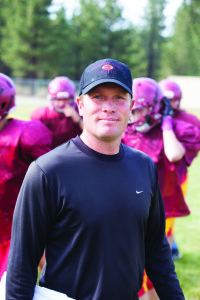 Greene was the Huskies’ offensive coordinator the last two seasons. Stepping up as the new head coach, he has goals and expectations set for the team. I asked Greene how it feels to be the head coach.

“It feels great,” he said. “It’s the least I can do to give back to the community and school that has given me so much.”

Greene says he’s here for the kids. 80 percent of his effort is to teach them core values, so they can grow up to be successful men in life. 20 percent is to make them “darn good football players.” Greene went on to say that if 15 years down the road a student of his came by and knocked on his door to say thank you or just hello, “I know I have done my job.”

His goal: for the team to become a family. Greene said, “We may be outsized, but we have heart. These kids have a twinkle in their eye, you could say. This a special group of individuals that get the concept and have driving motivation.”

Greene said he’s looking for Seniors Tyler Searles, ‘The Cub Whisper,’ Max Muller, Emmett Hugleman, and Junior QB Christian Orac to set up and lead the team. “We have not chose our Captain yet,” he said. “We will choose Friday before the game. I need to watch these guys down to the last minute to make the right choice.”

There are 33 players on the sidelines for this game vs Frazier Mt., five of whom are Seniors. When I spoke with Greene on Wednesday afternoon he said, “We are going in blind. I spoke with Frazier Mountain’s new coach on the phone. He stated that he was changing the offense and defensive strategy. We have never seen any tape on them. Mammoth and Frazier Mountain have about the same amount of enrollment and kids out for football this season, so I feel it’s an even match up. The only thing we have on our side is elevation and a long bus ride. Go Huskies!”