Edgar Weaver, 31, of Mammoth Lakes was sentenced to four years in state prison on Monday for his role in the October 6, 2014 death of Becki Dempsey in a motorcycle crash.

An intoxicated Weaver, with Dempsey as passenger, lost control of his bike on the tight corner heading up to Eagle Lodge on Meridian Blvd. by Meadowridge Condominiums.

Both were thrown from the bike. Dempsey died of internal injuries. Dempsey, 21, a native of the United Kingdom, had only been in Mammoth for a few months.

On Monday Sept. 21 at 12:50 p.m., Weaver walked into the courtroom, passing the Dempsey Family along the way.

David Anderson (Assistant District Attorney) argued that Weaver get a jail term of six years. He believed the victim’s youth and inexperience to be  an aggravating factor in the case. Specifically, he argued that Dempsey had never ridden a motorcycle before and Weaver knew that as evidenced on the video footage taken at the bar they left prior to the accident. 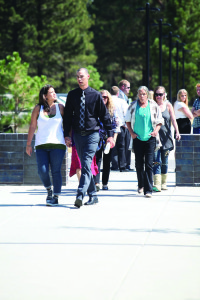 Weaver spent about 5 minutes showing Dempsey how to lean and sit on the back of the bike.  Further, Weaver did not give Dempsey any of the protective clothing that one would usually wear while riding a motorcycle, except for a helmet. She was wearing short shorts and a tank top which gave her no protection when she slid across the asphalt and was likely a contributing factor in her death.

Even the finding of one aggravating factor is enough for a judge to impose the upper term of 10 years.

The “middle” term Anderson sought could be imposed without the finding of an aggravating factor.

When Mono County Superior Court Judge Stan Eller asked the Dempsey family if it had anything to say, Mrs. Dempsey got up and sat next to Mr. Anderson at the plaintiff’s table. Looking at J.R. Weaver, she said:

“It’s hard to know what to say to you but I speak honestly and from the heart today. I hate the fact that you’re standing there and my daughter isn’t standing anywhere anymore.  I hope that prison teaches you the true meaning of our loss but any sentence given to you will never be enough … it will  never bring my daughter back.

You will only serve a short sentence but my family and I have to serve a lifetime sentence of pain and grief.  You may think that the sentence you are receiving is unfair but it’s not as unfair as the sentence that you have imposed on my daughter and us. The last 11 1/2 months have been hell and continues to be and you have caused that hell. I hope that you never have the chance to put anyone else through what we have been through. Myself and my family will never get over the loss of Becki and we are forever broken because of your stupid, reckless actions that Ill-fated day.

People say that time is a great healer but it’s not; as time passes it brings more pain because the knowledge of the new experiences that Becki will never be able to enjoy such as new films, books and songs that I think  becki would like this, and then I remember that it’s another thing that she was denied because of you. All the time I think where would she be now, what would she have achieved if you hadn’t killed her! That’s more torment and pain that I go through because of you.

I hate that you are now such a big part of my life. It’s so wrong that you will be forever linked to my daughter because every thought I have of her leads to you now and how much I hate you. After prison you will go on to have a future and a life where you will be able to get married and have children. When that happens I hope that you will then understand just how much pain and heartbreak you have put my family through and how wrong it is that a child dies before their parents. I wonder how you would have felt if something like this had happened to your sister!

Your family are very lucky to have been saved any further pain as you were lucky enough to survive the crash. I am happy that they have been spared any more hurt because too many people have suffered because of what you have done. Every one of your friends and family say it was a stupid accident but it wasn’t an accident: you knew that she was only 21 and had never been on a motor bike. You also knew that you weren’t insured so you shouldn’t have been driving the bike let alone enticing and encouraging my daughter to get on. You should never have been showing her how to be a passenger when you knew that you had been drinking excessively. You did not worry about Becki’s safety when you drove like a maniac at twice the speed limit as you were too busy showing off. You took advantage of an innocent and trusting girl and nothing anyone else says matters as I have watched all the CCTV footage so I know exactly what happened. You are totally to blame for Becki’s death …

Becki was just someone that you met that day and in your deluded mind you thought,because you had both been drinking that it makes it her fault, but the truth is that it wasn’t her fault – it was just yours.  You were the driver and the 31-year old adult who knew the consequences of their actions …

… It’s a shame that you have brought such an awful tragedy to the town of Mammoth. The support shown to us from the DA’s office has been overwhelming and I know we would not have got through the last year without their continued support which my family and I will be forever grateful for – thank you. My family was also overwhelmed by the support of the people of Mammoth. The messages from people and the support of the collection for Becki truly touched our hearts. It’s a town full of kind and caring people.“

There wasn’t a dry eye in the room when she finished.

Judge Eller then gave Mr. Weaver an opportunity to speak.

Weaver said; “ I can not change that day. If I could I would wind back time. Stuttering, he went on to say, “ I can never bring her back no matter how much I wish I could. This has changed me forever as it has yourselves. I will never drink again or drive a motorcycle. I don’t know why I was granted my life and her life was lost. I want to change places with her every day. I want to go froward with my life but this will haunt me forever and always shadowing me. This death was on my hands. “

A member of the Dempsey family shouted out,“ You need to man up to what you have done and take your punishment. Another: “Just take your sentence.” They didn’t want to hear it.

In his deliberation, Judge Eller noted that he has a 21 year old son. “I do not know what I would do If I lost him,” he said. But no matter the emotions with this case, feelings aside, Eller said he must uphold the law.

Weaver pled guilty to Gross Vehicular Manslaughter. Eller sentenced him to four years in State Prison. He also ordered him to pay approximately $35,000 to the victim restitution fund, as well as a state restitution fine of $1,500.