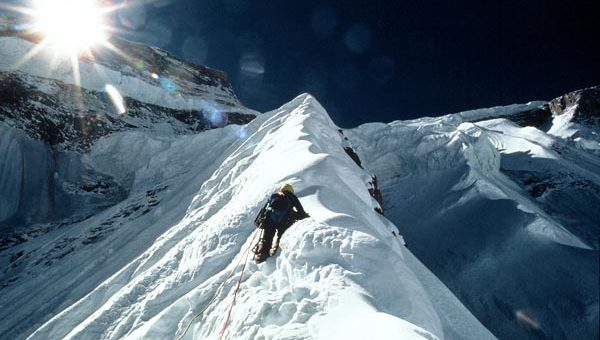 A member of the Expedition leads the Dutch Rib, a snowy, cornice-ridden, ice arrete on Annapurna I.

When Dr. Arlene Blum first set her mind to summitting the 26,200-foot monolith Annapurna I in 1972, an all-female team had never climbed that high.

Of the world’s 14 peaks with summits higher than 8,000 meters above sea level, none had been summitted by women. So when Blum, who was a seasoned mountaineer by her mid-20s, set out to make the first ascent of an 8,000 meter-plus peak by an American woman, she was challenging the status quo, even in America’s counter-culture-loving climbing community.

Annapurna I has the highest mortality rate of any peak in the world. It was the first peak higher than 8,000 meters to be summitted by humans. To date, 60 people have died climbing it, and only 157 people have successfully summitted. In the early ‘70s, it had only been climbed by eight people.

When asked why she chose Annapurna I, Dr. Blum said simply, “I knew women could climb high mountains, but at the time, people didn’t seem to think they could.” So she chose the most challenging peak she could find as a test piece.

Blum recruited 12 of the strongest female mountaineers she could find to join her. Blum chose to ascend the Dutch Rib, a knife’s-edge ridge of ice that had only been climbed for the fist time a year before, in 1977. In the year leading up to the trip, the 12 women, who ranged in age from their early 20s to 50, fundraised the $80,000 necessary to finance the climb by selling t-shirts that read, “A Woman’s Place is On Top.” Despite suffering some terrible pick-up lines and one-liners from their male peers, they made it to the Himalaya.

The American Women’s Himalayan Expedition was not universally popular with the rest of the climbing community. “At the time, we had trouble getting our permit approved by the American Alpine Club. There was a general attitude of pseudo-protectiveness that created obstacles for us. It was like, if a woman dies in the mountains, she’s trying to prove something,” said Dr. Blum this week.