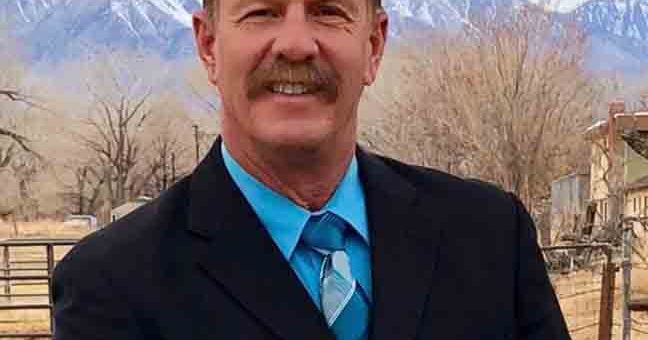 “If it wasn’t me, I would anticipate that one of my Lieutenants would be running,” said Hollowell, who was born and raised in Bishop. “You have to have a certain amount of experience and knowledge as far as day to day” operations. “I’ve had a lot of influences. I’ve had some really good Sheriffs and some really bad Sheriffs, and you learn from all of them. But the good ones keep you here and keep you going and keep you focused.”

“When I graduated from high school I knew exactly what I was doing,” said Hollowell, who entered the army for a two-year enlistment.

“I’ve been with the department for 30 years now,” says Hollowell, who has four full-grown kids (some of whom followed him into the military). “I’ve been through every position possible …I’m ready to move to the next step and ready to lead the department into future.”

Hollowell spent much of his time working in narcotics and major crimes. He says the passage of Proposition 47 has tied law enforcement officers’ hands when it comes to drug offenses.

“You can’t find a family that hasn’t been touched by [opioid or methamphetamine use] somehow,” said Hollowell, “But if you have somebody that has a simple possession and you have an attempted homicide case, you’re going to work that homicide case.”

He said that, besides drug use, one of the other issues facing the Inyo County Sheriff’s Department is retention and funding. He says much of his staff are not incentivized to stay with the ICSO when the pay isn’t comparable to other jurisdictions.

Hollowell said that “over the last 8-10 years, I’ve seen other agencies’ [pay rates] go up and ours have remained pretty much stagnant.”

And, “as far as funding… I’ve been doing the budget for 10 years now and every time I do budgets, I cross my fingers that they’ll let me do a rollover budget and not ask me to cut 10-15 percent off,” said Hollowell.

“In reality, the only place I can cut 10 percent is in personnel. I don’t have 10 percent in pencils, papers or tires. We beg, borrow and steal every year.”

Hollowell said that his “top priority is to provide the most professional law enforcement agency [he] can for the citizens of the County…I’ve always maintained that if you’re going to work for us, you’re going to be professional and courteous, and anything else can get you in trouble.”

Hollowell said he’s always strived to respect the people he works with, as well as the members of the community he interacts with in his job.

“At least 10 the people who like my Facebook page [www.facebook.com/hollowellforsheriff] are people that I used to deal with on a regular basis… sending them to jail,” said Hollowell. “And to this day I still talk to them, shake their hands.” He cited one man who paid him a compliment online. “When I see him [today], he thanks me for chasing him down all the times that I did, because it finally caught on and he decided to turn his life around.”

“If people have questions or concerns, I would rather hear from them than hear a rumor,” said Hollowell. “This is my community. This is my department.”