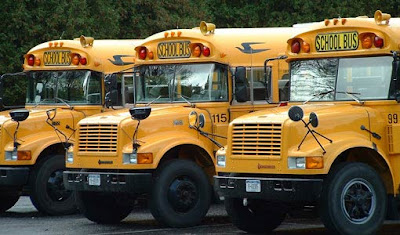 Mammoth Unified School District Superintendent Frank Romero reviewed solutions to the District’s budget crunch during a special School Board meeting on Tuesday evening, presenting a balanced budget he and Finance Director Jim Maxey worked out with a mix of creative money moving and input from the community.
In February, the District had to come up with $350,000 in cuts, which it achieved via one retirement, some spending reductions and elimination of 1 Full Time Employment Equivalency (FTEE). In May, however, the state’s budget grip tightened significantly more, forcing Romero to look for $600,000 more in cuts. He held a meeting to gather community input, and assembled a list of 28 community input ideas. A feasibility study was performed on each idea; some (elimination of School Board stipends, suspending field trips and miscellaneous classroom supplies) ranked high on the list. Others (going to a 4-day school week, a sales tax hike and charging a fee for instructional supplies) came in somewhat lower.
(School districts can’t actually initiate such tax increases, and by law must provide textbooks and instructional materials to all students.)
When all was said and done, four main actions solved the majority of the problem: 1.) reducing administration by 1 position (Elementary School Principal); 2.) reducing the Elementary School staff by 1, due to a last minute resignation; 3.) elimination of 1 contract employee; and 4.) elimination of 1 bus driver.
These moves brought the savings to $290,000, short of the goal. The rest was achieved by taking the remaining balances in Categorical funding, transferring those into the General Fund, and making up the difference with a drawdown from the Reserve Fund.
Using the Categorical money helped avoid taking the Reserve fund below the state mandated 3%, which would have drawn a Negative Certification for the District’s budget. (Think of it as the District being given a “junk” bond rating … not good.)
Romero said that Basic Aid districts, such as ours, should ideally have 10-20% in reserves. The numbers for the coming year aren’t yet final, however, he and Maxey estimate they will come in somewhere between 6 and 10%. Romero said the emphasis as he sees it will be getting plans in place to address more hard times potentially on the horizon. “The 2012-2013 budget could be problematic,” he said, saying that the state looks at not only whether a district will make budget in a current year, but also its projections 2 years into the future.

The wheels on the bus …

… Will continue to go round and round, but not without a few modifications, particularly to the routes. Romero pointed out that busing isn’t required, but the District does its best to keep it in service to help the community. He did, however, qualify that by saying that with the budget situation, the District will be looking to scale down routes. “No matter what you do, it won’t be perceived as equitable,” Romero said. “If you cut Crowley, you’ll hear that the rural areas are being penalized. If you cut Mammoth, you’ll hear, ‘Well, it was their choice to move down there.’”
Romero indicated the approach they’re considering will be “centralized,” essentially consolidating the number of stops in the various communities. What stops and where are still yet to be determined, and Romero added that keeping bus service (and other District programs) in the budget could prove difficult in the not-too-distant future, unless some supplemental funding options are developed.