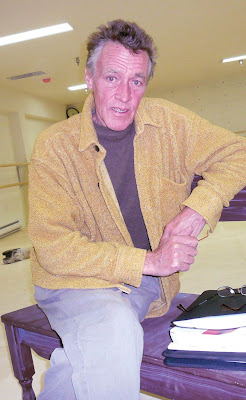 The Mammoth Lakes Arts Center has ended its affiliation with dance teacher Dennis Wayne. The Board has alleged that Mr. Wayne was embezzling money. A Mammoth police investigation is ongoing.
Dave Harvey, Chairman of the Arts Center’s Board of Directors, said the dance studio is not on hiatus and will continue to operate.
Debbie Christiana has been hired as the Arts Center’s new administrator. She is now in charge of both the theater and dance studio operations.
Christiana told The Sheet hers is a full-time position, but it’s unclear how she’s going to get paid. Harvey told The Sheet weeks ago that there was no money available to hire anyone to replace former Director Shira Dubrovner. When The Sheet asked property owner John Vereuck if he would be the one footing the bill for Christiana, he said, “That’s a Board decision. I don’t know the particulars of the contract, but the Board’s responsible to figure out a way to pay her.”
Mayor Neil McCarroll said that the onus for paying Christiana is on the Board. If revenues fall short, McCarroll said Board members will be forced to pay Christiana out of their own pockets.
Christiana was on vacation this week, but was expected back in town on Thursday to meet with MLAC’s remaining dance instructors Jennifer Collins (jazz), Paula Padilla (hip hop) and Pamela Stayden (Salsa funk).
Stayden’s the only one who taught a class this week (a single class from 6-7 p.m. on Tuesdays). Collins is out this session due to injury, and Padilla just had knee surgery and cancelled classes this week. She’s expected back next week.

End of the line

The end of the line for Mr. Wayne occurred Thursday, July 9, when Harvey, accompanied by Mammoth Lakes Police Det. Doug Hornbeck and Officer Andy Lehr, evicted Wayne from the dance studio while he was in the midst of teaching a class to two 12-year olds.
A third person also happened to be taking the class that day: Sheet Editor Ted Carleton’s wife, Sabrina Nioche.
Wayne was sitting in the studio teaching while Nioche and the two girls were on the balance bar when Harvey walked in and asked Wayne to step outside.
Nioche remained in the studio and took over teaching the class for several minutes before she went upstairs to get her phone.
When she got back inside the studio, Wayne walked in and said he’d been ordered to leave the premises.
It was left to Nioche to drive the two girls home.
Former Director Shira Dubrovner said Wayne did not have a formal, written contract though there is a paper trail which outlines their agreement (made before the current Board was installed).
Dubrovner said she and Wayne agreed on a 60-40 split of the proceeds (the 60 going to Wayne) while Dubrovner would supply the marketing and administration of the dance studio.
“All he had to do was show up and teach,” she said.
In addition, Dubrovner and Wayne agreed that he could supplement his income by teaching a summer-intensive program. He would have to recruit the students, but she would let him use the studio space for free.
When Dubrovner resigned in June, the Arts Center was left without an administrator. Here, accounts diverge. Arts Center Board members believe Wayne fully understood that he needed to bring bank deposits to them. They would cash the money and then reimburse Wayne.
Wayne said he attempted to bring over the deposits on three occasions, but no one was ever there, so he began doing the operation in reverse, cashing checks, paying himself, and withholding MLAC’s cut.
Wayne claims Harvey never contacted him prior to the incident on July 9, and challenged police to subpoenae his phone records for any phone call from Harvey.
McCarroll says Harvey told him he called several times attempting to reach Wayne.
When Harvey and police confronted Wayne on July 9, the envelope containing MLAC’s cut was in his gear bag.
“What bothers me the most is that I came here [to Mammoth] to begin fresh and now I’m tainted … I made a commitment to this studio, and I kept showing up even when there were only one or two students,” said Wayne.
He asked, rhetorically, that if he really had something to hide, would he have taken a personal check from a Board member’s wife?
McCarroll said that the Board was polled by phone before Harvey took action, but no formal vote was taken.
He said he was unaware of the side agreement regarding the summer intensive program.
McCarroll insinuated that Wayne may have some skeletons in his past and said the Board was conducting a background check.
The Sheet’s cursory research showed that Wayne was apparently trustworthy enough for Paul Newman and Joanne Woodward to sponsor his dance troupe for 15 years.
It’s also unclear as to why the Board would conduct a background check now as opposed to when Wayne was initially hired.
Wayne is a different breed and has drawn some raised eyebrows and concerns over some of the things he says. He doesn’t have much of a filter, and Kathy Cage, parent of one of Wayne’s summer intensive students, gives him an “F” for communication.
However, she is pleased with his teaching skills, and her daughter wouldn’t remain in the class if she had any concerns regarding his behavior.