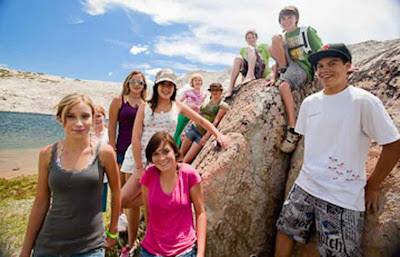 In the wake of school budget issues and student scheduling conflicts, parents in the town of Mammoth Lakes are seeking alternatives for high school education.
In March, a group of parents got together to discuss options for their children’s schooling. Parent Julie Thompson joined the group after she discovered that her daughter Stephanie would not be able to take certain classes at Mammoth Lakes High School due to her demanding sports schedule.
Thompson said her daughter Stephanie is on the Mammoth Lakes ski team and going into ninth grade. Stephanie will miss a number of school days to attend races, which conflict with an Honors English class and a Spanish class she wanted to take. Thompson said the school could not accommodate her child’s needs.
Discouraged by the inflexibility, Thompson began searching for alternatives for her daughter’s education. She said she didn’t want to enroll Stephanie in the charter school, since that form of schooling lacks supervision and instruction. After Thompson found out that a group of parents had gotten together to start Mammoth Lakes Academy (MLA), an alternative school for grades 9-12, Thompson began attending meetings. When she discovered who would be directing the school and teaching classes, she became even more excited.

Trip Armstrong said he was honored to be contacted by the group of frustrated parents back in March, asking him to direct and teach for a new alternative school in town.
Armstrong said he has been told he possesses three prominent qualities that make him a strong candidate for the position. First, his leadership and guidance skills become important assets in a classroom environment. Second, he said he provides a certain level of entertainment and engagement for the students. If the students are going to be eager to learn, he said, a teacher needs to make an attempt to connect with them on a level that’s exciting. Third, Armstrong has a broad knowledge of a range of different subjects, including math, science, literature and Spanish.
“He really is a jewel for our town,” Thompson said. “We’re really fortunate to have somebody like this who is willing to teach. He relates great to kids and adults, which is a talent in itself.”
Armstrong has been teaching home schooled students privately in Mammoth for six years now.
Armstrong said common reasons parents have given for starting a new academy is to foster a better social and intellectual atmosphere for growth.
The academy uses the K12 curriculum offered by the California Virtual Academy (CAVA), which is a free online charter school program. The program is accredited and successfully meets California State and University of California academic standards.
Armstrong said the academics of CAVA are rigorous and provide strong preparation for college-bound students. In addition, the flexible structure of CAVA provides students with the opportunity to craft their class schedules around extracurricular activities. MLA students are still allowed to participate in the high school sports programs and will be able to eat lunch with their friends from the public school. Armstrong said he hopes the program will not become divisive in the community between public school and MLA students and doesn’t foresee that happening.
The program is broken up into classes taught by Armstrong, independent and group study, and internet-assisted lectures and assignments. The students’ papers and tests are sent to CAVA teachers over the Internet to be graded.
MLA will offer a variety of creative activities including both field trips and art classes provided by the Mono Council for the Arts. Armstrong just recently led the first field trip with a group of 18 students and parents. He took the group to Yosemite high country to teach them about the flora, fauna and geology of the area.
“The field trip was just fantastic,” Thompson said. “Every step you took [Armstrong] was explaining a rock or plant that I would never have noticed.”
The next field trip is scheduled for September 19 and will focus on an introduction to alpine ecology in the Sierra.
Although MLA will offer opportunities for students that aren’t available at the high school or charter school, Armstrong said the academy is not for all students. He said students need to be academically motivated, self-disciplined and cognizant of their own progress. Students need to be very passionate about their education to excel in a program like this, he said.
One of the main reasons students need to be self-motivated is due to the structure of the program. Armstrong said there will be times when he is with students one-on-one. However, other times, students will be left to tackle their own independent studies. He said there may be some students who would take advantage of the flexibility CAVA provides, slack off on their studies, and fall behind in the curriculum. Armstrong said whether a student will fit into MLA has less to do with intelligence and more to do with committing time and effort on his or her own.
MLA students won’t be the only ones to manage certain responsibilities. The board of MLA parents decided to set a 40 hour minimum requirement of parent volunteer time to the academy.
Thompson said she thinks parent volunteer time is a great idea. She has been intimately involved with the elementary school PTO for nine years, and the middle school PTO for three years now. Thompson said she would like to see every school mandate a little parent volunteer time.
“It really takes a village,” Thompson said. “Everybody should be participating. I never thought it was one hundred percent the responsibility of schools to educate a child. It should come from families as well.”
Currently, 15 students are enrolled for the 2009-2010 school year. The cap on enrollment is at 20 for this year, to maintain the optimum student to teacher ratio, Armstrong said. The starting cost is $500 each month with a decrease in price if the program is successful, parents are hoping. Although no scholarship programs are available for MLA at this point, parents are working on providing scholarship access for low-income families in the near future. MLA classes begin September 8 at 220 Sierra Manor Road, Suite #1.
For more information about MLA, contact Trip Armstrong via e-mail at info@mammothlakesacademy.org, or by phone at 760.709.1210.