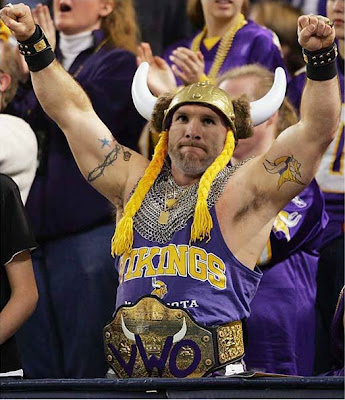 Let’s see if this Viking isn’t ready to send Favre to NFL Valhalla by the time the season’s over … (Photo: blognetnews.com)

BRETT LUCIFER FAVRE is back in the NFL, and come December, Minnesota Vikings owner Zygi Wilf will wonder why he sold his soul to the devil to finish 8-8.
Here are just a few reasons why signing Favre is a team-wrecking act of desperation.
1. Favre skips training camp. Everyone says he doesn’t need it. Huh? First, he is on a new team. He doesn’t know the center, the line, the receivers he’ll be throwing to … AND he’s coming off surgery. He’s got a built-in excuse to be bad: he’s rusty. In week 2 of the season, they’ll shrug off his three interceptions by saying it’s really the equivalent of a 4th preseason game. Except the three INTs will count. The loss will count. Every week matters in the NFL.
2. Favre was supposedly “GREAT” last year until he hurt his arm. So he retires, but has surgery so he can play. BUT WAIT. He announced last week he still has “a small tear in his rotator cuff.” Okay, so he sucked at the end of last year ‘cause his arm was bad, and now he has a torn rotator cuff, but don’t worry, that won’t matter. He is ready to play. Look, I have a torn rotator cuff, by the way, and I know this: I can curl some beer and bourbon, but I can’t throw a football in the NFL. This is a repeat of number 1. A built in excuse. The same people who say the situation won’t bother him will use it later to explain his failures.
3. The guy comes on TV this week and says “get ready to catch passes from a legend.” He might have been a legend if he retired five years ago. Not now. Now he’s just an over-the-hill QB who could care less about anything other than the nearest microphone. His legend is like The Alamo. Greatly overrated. Check his playoff record. Among other ignominious accomplishments, who is the only QB in NFL history to throw 2 overtime interceptions in playoff games … BRETT FAVRE.
4. By letting him skip training camp, you have told the rest of the team they don’t mean squat. Favre is bigger than you and the game. But don’t worry. After Favre gets pissed off at Vikings fans for booing his sorry ass this year, he’ll want to go to the Bears next year, which will help you win the division.
5. What do you do with your other QBs after this? You brought in Sage Rosenfels to compete with Tarvaris Jackson for the job and now have essentially told them both they’re not as good as a 40-year old has-been. Until next year. When he’s gone and you desperately try to restore their confidence, as well as the team’s confidence in them.
6. Don’t forget this: the Vikings strength is their run defense and their top two defenders are suspended for 4 games. Chew on that for a while and see a 1-3 start.
… In other menstruating QB news, Jay Cutler forced a trade from Denver to Chicago in order to turn over a new leaf. Now he says he should have a say in personnel decisions. Then he dogged his “best” WR, Devin Hester, for not trying hard enough to break up an interception he threw. WOW. Cutler is nutty. And they traded away the better part of two drafts for him. Head coach Lovie Smith has once again got the S.S. Minnow lost at sea without a depth chart.
Meanwhile, former Bear starter Rex Grossman is out 4-5 weeks with a leg injury. Actually, he has been out 4-5 years with a football-intelligence injury.
Meanwhile, former Bear starter Kyle Orton, traded to Denver in the Cutler deal, threw 3 INTs in his first preseason game. Hold on. The starting QB rarely throws more than 3 passes in a preseason game. New Denver coach Josh McDaniels wanted Cutler out. As they say, be careful what you wish for.
Another NFL player tested positive for performance-enhancing-drugs. Garrett Hartley … A KICKER. On performance-enhancing-drugs. That is comical.
Who was the genius who gave Marcellus Wiley a job on ESPN? Somebody over there has a good sense of humor. Just listen to Wiley pronounce ‘Favre.’
I saw an article that says it is now hip for young men to have potbellies. Now that is just lazy. At least I waited ‘til I was 35 to get a potbelly. Worse, the women are apparently accepting the bellies. That is lazy on their part. Then again, if they accept guys with diamond grills, nasty ass nappy fros and pants hanging off their asses, they’ll apparently tolerate anything. Young girls also think it is okay to be called “Muffin Tops” cuz they have a Michelin ring around their 20-year old waist …
Heard another ridiculous thing via a newscast from Malibu, Calif. The talking head was yammering about a Great White Shark sighting. With temperatures approaching 100 degrees and with all the people rushing to the ocean to cool off, and the Great White sighting, the lifeguards are reported “ready.” Would somebody please tell me what these lifeguards are “ready” for? To be lunch? The last thing I need when I am being eaten by a Great White shark is a lifeguard with some tight red shorts and a little red floatie running down the beach yelling, “Get out of the water!” Well, I would, but thing is I’ve got this Great White hanging on and my whole left leg in his mouth. But the lifeguards are ready. Ready? THAT IS SOME OF THE DUMBEST REPORTING EVER.