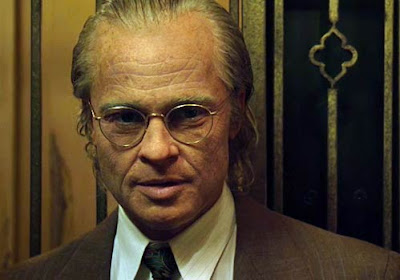 The state’s approach to Prop 1A money is still operating in reverse, with funds being routed back in Sacramento’s direction from the counties, instead of the other way around. (Photo: Paramount Pictures)

In a department head briefing on the budget situation at Tuesday’s meeting of the Mono County Board of Supervisors, Finance Director Brian Muir told the Board he’s still waiting on figures from Sacramento before being able to accurately assess how much Prop 1A (up to 8% of local property tax) money the County may have to “lend” to the state.
On a brighter note, however, Muir told The Sheet last week that he’s managed to reduce the amount of the projected budget shortfall for FY 2009-2010. At last report it was down roughly $500,000 from the early $1.9 million estimate, though Muir said more changes could be expected before the budget process is complete and that number shouldn’t be considered final. He also said we’re still in an enviable position compared to other counties. One “small county,” which he chose not to name, has already gone “way past fat and is now down to the bone,” having resorted to illegally borrowing school funding, something Mono County hasn’t had to do.
In a related discussion, Board Chairman Bill Reid expressed his concerns about plans for Caltrans to be furloughed on the first three Fridays of the month. “Major highways could be shut down, and the longer they’re shut down, the harder they are to open,” Reid opined. He was also concerned as to the public safety threat posed by such shutdowns, and verbally vexed as to why the state was, in his estimation, being so inflexible on scheduling furlough days. “If we get a big storm in on a Thursday or Friday, how many Caltrans workers are going to answer their phone and come out — on straight time — on a furlough day?” At last report, Caltrans was still working on how to handle the furlough days problem, but not wanting to let the problem drag out, the Board decided it would be a good idea to invite both Caltrans and the California Highway Patrol in to update them on the situation and discuss ideas and options well in advance of the first snowfall.

Supervisor Byng Hunt reported that the First 5 Healthy Families program for next fiscal year would be funded through the state-level First 5 governing body. Hunt said it was first thought that it might be necessary to tap the local First 5 organizations for funding, but enough money was found at the state level to avoid that move.
Human Resources Director Bob Garrett updated the Board on the situation regarding County job vacancies. Garrett said salary savings to date from four positions previously deferred by the Board amount to $413,938. He did, however, advise the Board that a Senior Citizens Site Coordinator position in Walker also recently became vacant.
The Board generally concluded that the deferred positions should remain that way, at least until budget work is concluded, but at the same time said the Senior Coordinator slot should be filled as soon as possible. (Salary for the opening is a mere $15,000, which the Board considered doable).
In terms of recruitment, Garrett said one offer of employment has been extended for the Appraisal Operations Manager job in Assessor Jody Henning’s office, the Public Health/County Administrative Office position transfer has been completed, and recruitment is underway for the approved hiring of an Inventory Purchasing position in Public Works and a Safety Officer for the County Jail.
County Social Services Director Ed Zylman added that an Employment Training position that’s also on the deferred list should ultimately be easy to fund. Governor Arnold Schwarzenegger’s budget cuts reportedly didn’t hit that sector of the state budget as much as was expected, which Zylman called “ a bit of good news.”
Finally, Chairman Reid talked about a community effort to map and identify who’s buried in several unmarked graves in the Bridgeport cemetery. Currently the graves are only delineated with cut up snow sticks that have been fashioned into crosses and painted white, and Reid said the hope is that local records and documentation of veterans organizations may reveal who’s interred there and thus efforts can be made to properly marker the graves.