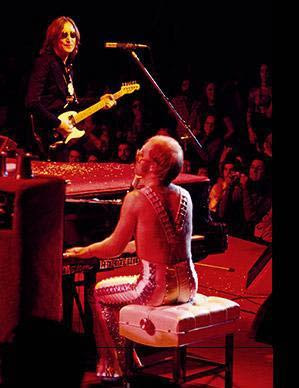 John Lennon (along with some bloke named Paul) wrote “Lucy in the Sky with Diamonds,” which he performed at Madison Square Garden with Elton John in Nov. 1974 during his last ever live concert appearance. The photo has nothing to do with the story … we just thought it looked cool. Well, it was either this or a still of Sean Connery from “Diamonds Are Forever” – nah, too obvious! (Photo: George Kalinsky, MSG.)

Nearly 20 years ago, the Mammoth Lakes Foundation created the Diamond Partner program as a fundraising tool to help fulfill its mission statement: “The purpose of the Mammoth Lakes Foundation is to support higher education and cultural enrichment in the Eastern Sierra.”
The program started with one partner, ultimately reached a high of 25, and according to the Foundation’s Executive Director Evan Russell, included “20 or 21” participants this past year.
Russell said a $45,000 commitment over three years entitled members to:
*2 transferable ski passes at MMSA.
*A preferred MMSA parking pass.
*A Snowcreek Athletic Club membership.
*A Snowcreek Golf membership.
*An invitation to all Foundation events.
Russell said the program netted about $200,000 for the Foundation last year.
In turn, the Foundation spread this largesse throughout the community. Last year, for example, $50,000 went to local scholarships and about $15,000 went to the Felici Trio.
About two months ago, however, MMSA CEO Rusty Gregory notified Russell that he would like to see some changes in the program. Specifically, Gregory wanted to see the first $250,000 raised by the Diamond program go to local K-12 education.
As it is, Gregory and his wife Bonnie are personally donating $250,000 to Mammoth Unified’s 501(c)3 this year in lieu of his Diamond Partnership – though he hopes to backfill the donation later, if possible.
As Gregory sees it, “From Mammoth Mountain’s standpoint, we are committed to the community, especially to education, and the children of this community have been a primary focus of ours over the years … the whole college effort has been heroic and successful and continues to need support from us and others.
But it’s also clear that the K-12 programs are under siege. That is the acute need right now. We’re in an emergency situation.”
By Russell’s math, however, if he only netted $200,000 from the program and the Mountain wants him to give away the first $250,000 … he’s underwater.
So he has two options. Recruit more diamond partners or potentially rethink the entire program.
In the current environment, Russell and his Board are pessimistic about increasing sales the 30-40% necessary to meet Gregory’s demands.
In addition, some Board members have balked at the idea of rewriting the Foundation’s mission statement to accomodate the change. “Board members didn’t sign on for that,” said Russell. “My Board has told me to make sure we don’t lose focus because of the money.”
In the meantime, it’s a standoff with no immediate solution. Russell hasn’t officially said ‘no’ and Gregory hasn’t said what he’d do if Russell said ‘no.’
On a positive note, the Foundation, which turned 20 this year, has done some very impressive things. The student housing is built and enrollment is growing at a clip of 15-20% annually over the past three years.
The housing was over 80% occupied during the second semester of the 2008-2009 school year and what local students have said is that the housing has made Cerro Coso feel more like a real college versus a continuation school. Itr’s a broader mix than just seeing the same person across the room whom you just marched with in graduation three months earlier.
The Los Angeles Times lavished Mammoth’s Cerro Coso campus with a two-page spread this spring, extolling the virtues of going to college in the High Sierra.
And then there’s Deanna Campbell, the Director of the Eastern Sierra Coillege Center, whom Russell says is the best thing that ever happened to us.”
All of which, ironically, may make Russell and the Foundation a victim of its own success. Because the public perception is positive, the need doesn’t seem quite as dire. As Tom Cage (who’s been all over this issue) said this week, the college is built. Like Gregory, he sees the need at the high school level. And after years of being part of the Diamond Partner program, he’s pulled out this year to lend his support to Mammoth Now, a 501(c)3 non-profit set up under the umbrella of the Mammoth Unified School District.