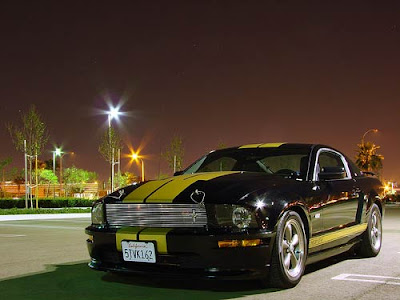 Hertz’s custom Shelby Mustang GT-H rental. Hey, Tom, think you can get one of these babies with All Wheel Drive? (Flickr photo by mike_s_etc)

Cage may partner with chain on rental cars

With just about 100 day to go before the start of expanded winter air service (to 5 flights/day), Mammoth’s Airport Commission kicked the tires on increased rental car and taxi service during its monthly meeting on Wednesday. Local business owner Tom Cage, who had stocked a small fleet cars during the last winter season alongside Enterprise rentals, told the commission he had averaged about 4 rentals per Horizon flight, and during peak times had an average of 8 cars out at any given time. (Enterprise had roughly 10 cars per flight.) Cage estimated that given the increased traffic through the airport, at least two staffers and 50-60 cars would be needed. A national brand, he added, would also be important, thus his current discussions with Hertz to work out some sort of partner or franchise deal.
Even if Cage ends up going it alone, however, he still intends to stay in the rental market, and said he plans to post 18 cars at the airport, and keep another dozen in town. Both taxi services are gearing up to provide increased levels of service to meet the additional flights
And I can hear you thinking, “What about summer air service?” Well, it’s still not a done deal, but Commission Chair Pam Murphy said the contract is written and Horizon has “designated” a plane. All that’s missing is the funding. Airport Director Bill Manning said that as of Thursday, a Small Communities Airport grant application was turned in, requesting $800,000 from an $8 million money pool. If approved the grant would be used to subsidize air service. Any money left over would be available for marketing.
Murphy indicated the $800,000 could all but secure summer service, and that contract work could resume as late as January and still get the deal done. Manning said a decision on the grant is expected in December.