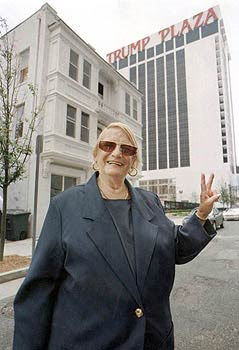 Vera Coking in front of her former home, nestled next to Trump Towers in Atlantic City. The decision in her eminent domain case trumped Trump. (Photo courtesy www.mtotsa.com.)

During the sometimes contentious Planning Commission debate on the Hart-Howerton Main Street plan, Tom Cage told the following story about an elderly woman from Atlantic City, New Jersey who was in negotiations with a casino developer to sell her property.
According to Cage, the price kept going up and up and the woman kept holding out to the point where the casino finally just withdrew its offer and built hulking casinos on both sides of her tiny little house, rendering her property virtually worthless. Cage implied the woman ended up being very disappointed about overplaying her hand.
I suppose the analogy was supposed to illustrate that Main Street shop owners may as well get on board with a new Main Street District Plan or risk getting left behind.
Curious, I went home after the meeting and poked around on google until I found the story Cage was apparently referencing.
This is how the story actually goes, research courtesy of Geisel.
In 1993, when Donald Trump sought to expand his property holdings around his Atlantic City casino and hotel (to build a parking lot designed for limousines), he bought several lots adjacent to his property. Vera Coking, a widow who, by that time, had lived in her house about 35 years, refused to sell. This was not the first time Coking had been asked to sell her property for development. In 1983, publisher Bob Guccione offered Coking $1,000,000 for her property, which she declined. When Coking refused to sell to Trump, the city of Atlantic City condemned her house, invoking the power of eminent domain. Her designated compensation was to be $251,000, about one-quarter of its value 10 years earlier.
“This is America,” she said. “My husband fought in the war and worked to make sure I would have a roof over my head, and they want to take it from me?”
Usually the Donald Trumps of the world and their partners in government get what they want. Coking, however, managed to get what most everyday folk don’t: media attention — and a public-interest law firm (Institute for Justice) which took her case.
In 1998, Superior Court Judge Richard Williams ruled (albeit on a technicality) against Trump and the government, finding that taking the property would benefit Trump, not the public. Williams said that there were “no limits” on what Trump could do with the property, and therefore the plan to take Coking’s property did not meet the test of law. Coking got to keep her home, which was snugly nestled next to the Trump Plaza Hotel, before [ironically] selling it to a casino company in 2007.
Coking’s neighbors felt she was a hero for sticking it to the man and helping to preserve a small piece of Atlantic City history.
Slocum’s owner Cindy Avena commented after hearing Cage’s version of the story that she hoped the little old lady who held out just happened to operate a restaurant (actually, she operated a boarding house).
As to the Main Street plan, Gregory knows he’s in for a long slog, and is prepared to subjugate his ego, if necessary, to keep all parties at the table. As he said via telephone after the meeting, “I will kiss his [Paul Rudder’s] bare ass if he’ll continue to participate.”

In a seemingly innocuous matter, Council voted at a special meeting Wednesday to run a trial bus route up Old Mammoth to Red Fir, largely as a means to help transport schoolchildren twice a day.
Problem is Councilmember Skip Harvey had some concerns regarding the safety of a bus executing a U-turn at the base of Red Fir, especially during stormy periods.
So Council decided to run the bus in a loop to the top of Red Fir and through the neighborhood back down to Old Mammoth Rd.
Precisely what Red Fir residents have been fighting for years.
No wonder Red Fir residents were not notified of the special meeting.
At the meeting, Transportation Director Bill Manning implied that Red Fir residents weren’t crazy about a bus route through their neighborhood, but they were okay with it. He said there were really only two homeowners in opposition.
Big surprise. Manning appeared to misrepresent the sentiment of Red Fir residents (a more polite description than to say he lied) and these residents are furious. We look forward to the fireworks at the Sept. 2 Council meeting (an opening act to the budget talks).
A possible compromise floated by Harvey Thursday may be to take the route up to the Bluffs, purportedly for recreational access.
By the way, if you’re wondering where the bus will stop on Old Mammoth Rd., it will stop … right in the middle of the street. There are no bus pullouts.

The Mammoth High School Football team will forfeit its first two games of the season according to Head Coach James Gray due to a shortage of eligible players. Therefore, its first game will take place Sept. 18 @ California City. Its first home game will be against archrival Bishop on Oct. 2.

As happens with any budget procedure, rumors will circulate, and within hours of adjournment from the last of the Mono County Board of Supervisors intensive three-day budget workshops for FY 2009-2010, one rumor had already started flying; that the Board decided to cancel County support funding for many nonprofit groups. “Not true,” replied District 5 Supervisor Byng Hunt. In fact, Hunt said, the County’s budget is shaping up to be one of the best in the state. “We’re probably looking at being at or near the top of the heap out of 58 counties,” Hunt told The Sheet.
The news for nonprofit groups is, counter to hearsay, actually good. “As far as I know, we funded everything in front of us,” Hunt said, including groups such as Chamber Music Unbound and Friends of the Inyo, which he said were only two of many organizations that had their requests granted without reservation. “The only ones that come to mind still yet to be funded are Mammoth Lakes Trails and Public Access and GEO (Geothermal Educational Outreach),” Hunt explained. All that’s holding up funds for MLTPA is submittal of its formal request. “And we have every intention of funding it as well,” Hunt said. As for GEO, Hunt said the Board is still working on securing a $36,000 Community Development Block Grant that hopefully will save the County from pulling it from the General Fund.

Looking at the broadstrokes/bottom line numbers, Hunt delivered more good news. After a $1.4 million drawdown to backfill an anticipated shortfall in revenue, the Board still has $4.3 million in reserves. It also managed to bank $550,000 in its discretionary contingency account for miscellaneous expenses. “If [for instance] GEO needs $10,000 for this or that, we’ve got it,” Hunt said.
Hunt also said that the Board managed to add a total of three additional “badly needed” deputies to the Sheriff’s Department, including a new patrol position.
The budget as it exists now reflects all the reductions implemented by the various departments, and will go to the Board for final approval in September.

During the Mammoth Unified School District’s (MUSD’s) Board meeting Monday, Mono County Auditor Roberta Reed and Assessor Jody Henning briefed the District on the flow of funds to MUSD as it relates to the County’s tax rolls.
During Reed’s presentation, she reported that the tough economy has boosted deliquencies from their 5% typical rate, to an unusually high 11%.
“Payments are coming in, but slowly,” Reed related, adding that most of those are second homeowners who are probably withholding checks as long as they possibly can, hedging delinquency against the economy turning around. Reed said that delinquency comes with a price, too … there’s no penalty for tardiness until you’re delinquent … then you get hit with interest daily.
The bad news: MUSD can’t collect until the County gets paid. “Mono is, unfortunately, a ‘share the pain, share the gain’ county,” she said. The good news, however, is that it shares in the pooled interest on delinquencies that are ultimately paid.
Henning followed by saying condo assessments are basically finished, and have logged a drop in value of anywhere between 10% and 35%, with the exception of the Village. Henning said it was too early to project single-family and commercial properties, but said she expects to have the bills in the mail by the end of October. “Tax roll is a moving target,” she explained. “We make corrections daily.”
Henning then turned her attention to the MMSA reassessment situation, hoping to clear up any misconceptions about the situation.
She said that base-year value was set based on MMSA’s Dec. 20, 2005, transfer of ownership. Next, 2006-2007 were enrolled, and though 2008-2009 were planned to be held off (under former Assessor James Lovett), Henning decided to include them as part of the review for a decline in value, similar to that being experienced by other properties in the county.
Meanwhile, counter to some recent chatter, Henning said definitively, “MMSA has no unpaid taxes. There are simply no current bills to pay.” MMSA CEO Rusty Gregory acknowledged that the ski area and county are $100 million apart when it comes to their assessment calculations.
Tom Cage (perhaps only half-jokingly) suggested splitting the difference, since Henning and Gregory were both in the room. Gregory amiably said that he’s confident in MMSA’s numbers. “My numbers are right,” Henning good-naturedly quipped in response. “I’m an assessor with 30 years experience. I’m confident in my numbers, too.”
Finally, we have been informed that there will be a fundraiser for the late John Bachar’s son Tyrus at the Westin pool on Sept. 12 from 5-9 p.m. Music, raffles, blind auction, and unconditional support for a teenager who just lost his Dad. Look for more information in next week’s paper or call Robin Thompson at 934.3705 if you wish to donate raffle items.