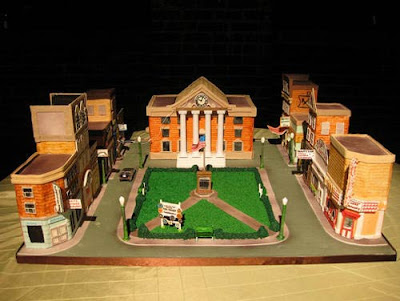 The Hill Valley Town Square from “Back to the Future” – as a cake. Slices for everyone! (Photo: Flickr/Boing Boing)

First, I suppose we should correct the headline.
What MMSA CEO Rusty Gregory and Chadmar Group President Chuck Lande commissioned as a future blueprint for Main Street from architects Hart-Howerton is not officially a plan or a proposal. Mammoth Lakes Planning Commissioners downgraded the verbiage swiftly during their regular meeting in Suite Z Wednesday. Commissioner Sharon Clark said the proper word for the set of architectural drawings should be ‘concept.’ Commissioner Jay Deinken thought a better word for it would be ‘catalyst.’ Mammoth resident Greg Eckert? He wasn’t as kind. “I’m not sure what I’d do with it if I had it in my bathroom.”
Nevertheless, it is a starting point, and proponents and detractors took the opportunity to weigh in Wednesday.
Mammoth’s Community Development Director Mark Wardlaw began the meeting by reassuring those in attendance that “we’re not pushing an agenda … The Hart-Howerton design is meant to be provocative, but it’s not ‘the plan.’” Wardlaw said he didn’t feel it was anyone’s intention to cram something down somebody else’s throat.
Mammoth Mountain Ski Area Director of Development Jim Smith added that the architect was directed to work from a blank canvas, ignoring current property uses and property lines.
The result has left many Main Street business owners nervous, because some, such as John Mueller of John’s Pizza Works, found they were literally zoned out of existence by Hart-Howerton. The kicker for Mueller may have been Gregory’s reference to his property as a “swale,” better suited, according to architectural plans, as open space or a public park. The swale comment was made at last week’s Main Street workshop at the Mountainside Conference Center, and Mueller is clearly still irritated by it.
He’s also skeptical of any planned local takeover of Main Street from Caltrans and is worried that area business owners, via a special assessment district, might be left holding the bag when it comes to snow removal and maintenance.
“They keep telling me ‘John, John, this is just a hallucination,’” Mueller said in a phone interview Thursday, “But I think to myself, they just happened to pay $100,000 for that hallucination.”
Paul Rudder, owner of the Mammoth Luxury Outlet Mall, said the architect’s ideas may be wonderful, but the architect is in Colorado while local business owners are here on the ground. “And it’s always a concern when someone else tells you what might happen to your property.”
This was a principal concern of Gregg Martino, who owns A-Frame Liquor. Martino asked Wardlaw if Main Street planning could conceivably result in a rezoning or potential downzoning of his property.
Wardlaw said that although what’s being undertaken is not a program to downzone existing uses or a “condemnation-based” effort, zoning changes which may preclude certain existing uses “could be an outcome.”
Tom Cage of Kittredge Sports is in support of some kind of Main Street plan for a few reasons. 1. Because he believes his Main Street properties will be worth more if a Main Street plan is created, and 2. Because doing nothing is not an alternative. “What are we going to be left with if it doesn’t happen? … I hope we don’t get scared, sit here and do nothing.”
Gregory, who was unable to attend, echoed this point in a phone interview Wednesday. He said it’s not so much about people disagreeing with Hart-Howerton; he fully expects many disagreements. But what he’s hoping for is that after the first stage of disagreement, stakeholders will then have to move beyond what they don’t want to see and move into what they would like to see.
As Jim Smith said at the meeting, “Our goal is to be able to describe and market Mammoth in the affirmative.”

Mammoth may be at risk of a fine from the Federal Communications Commission after all the four-letter words that got lobbed around Wednesday (the meeting was taped).
The parade of “s$#@” was instigated by a comment from someone who wasn’t even in attendance, our erstwhile Gov. Arnold Schwarzenegger.
On a visit to Town last year, Schwarzenegger remarked to MMSA CEO Gregory that Mammoth’s Main Street “looks like the same s$#@ that was there in the ‘80s.”
Cage then laughed and said, “And it’s true, I own some of that s$#%.”
“And Tony [Colasardo’s] bathroom [at Footloose] already has the footprint for the gondola.”
Paul Rudder, however, didn’t want all the bathroom humor to get in the way of the substance of Hart-Howerton’s proposal. His analysis was that the proposal was seemingly designed to squire visitors over Main Street to Village and Mountain properties via a gondola which would theoretically be built with public funds.
Therefore, said Rudder, rezoning his Luxury Outlet Mall property for commercial lodging woul,d leave him with the short end of the stick. In such a scenario, he said “demand for lodging away from the mountain will be zero.”
“I believe in fairness and equity for all. Mammoth Mountain should pay for the improvements that benefit it.”
Rich McAteer and Bruce Woodward both cautiuoned Planning Commissioners to not underestimate the Main Street district’s sphere of influence.
The only official action the Planning Commission took was to extend the eastern boundary of the district from its former edge at the Fire Station down to the Town’s Welcome Center.