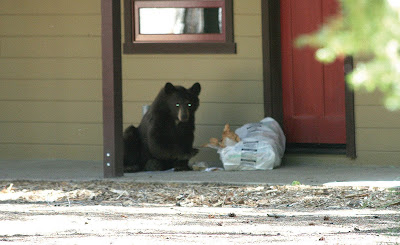 Dining on the front porch at 174 Sherwin Street on Thursday. (Photo by Lunch.)

This story originates, innocently enough, from an anonymous phone call. A woman named Jean-Marie called to inquire about local efforts to relocate Blondie the bear to Colorado.
Blondie, according to Mammoth Wildlife Specialist Steve Searles, is responsible for at least 50 break-ins of local residences within the past two years.
Oddly, though, Blondie had disappeared over the past week-and-a-half, leading Searles to wonder whether the bear had been shot or poisoned.
The name Jean-Marie rang a bell. Reason being that Searles caught a man red-handed a couple of weeks ago dumping a 25 lb. bag of dog food into a bucket in the backyard of an Old Mammoth residence. The homeowner’s name had been Jean-Marie.
Piecing together some details, The Sheet learned that Jean-Marie Webster is a second-homeowner who lives in Ojai, Calif., and is affiliated with a non-profit organization, Wild Horses in Need, which rescues and rehabilitates wild horses.
So we asked her if she’d been intentionally feeding the bears.
No, absolutely not was the reply. “I don’t believe people should feed bears,” she said. Webster added that she’d had a caretaker on the property that day “measuring.”
Yes, she admitted she’d put food on the deck for the raccoons and that there was a stray cat she’s been feeding, but no bears.
She also said she hasn’t been up to Mammoth in the past year.
Sheet: So how do you know you have a stray cat?
No response.
The caretaker was ultimately cited by Mammoth Lakes Police.
Webster says she has since filed a complaint against the Mammoth Lakes Police Dept., claiming her caretaker was handled roughly and placed in an arm-lock by Officer Andy Lehr.
Searles said he winessed the caretaker pour a large bag of dog food into an open plastic container from a distance of 20’. “I could clearly see him, and I radioed it in. Officer Lehr responded to the call and parked behind the caretaker’s vehicle to block him in. When he [the caretaker] came out of the house, Lehr asked him if he had been feeding wildlife. The man replied that he hadn’t fed anything to the animals.”
Which is when Searles pointed out the plastic container [actually a pet carrier cut in half and turned upside down] full of dog food in the backyard.
By this time, the caretaker was on the phone, apparently trying to reach Webster. Searles said Lehr ordered the caretaker to hang up the phone and show his driver’s license four separate times before he put the man in the arm-lock.
Webster then told The Sheet that Mammoth Wildlife Specialist Searles “doesn’t know anything” about bears and that a friend of hers who happens to be a wildlife biologist for the State Dept. of Fish and Game, says that Mammoth’s bear problems have, in some respects, been caused by bear-proofing dumpsters.
In other words, she argues that we trained them to eat artificial food by not locking dumpsters, and then took it away by locking dumpsters, so now the bears have no food source.
Webster would not reveal the name of her biologist friend.
Searles replies that a cursory inspection of any bear scat in town would indicate they are all eating quite a bit of natural food and that the natural forage this year is bountiful. “Blondie grazes all day,” said Searles, “and then she breaks into a few homes for dessert.”
Searles said that if you made an aerial map of Old Mammoth which showed every single home that’s been broken into by Blondie this summer, Webster’s property would literally be ground zero.
When Lunch went out to Old Mammoth to see where the Webster properrty was located, Blondie, ironically enough, turned up as if on cue.
Lunch followed Blondie back out to Sherwin Street, which is where he took the front page photograph of another bear feasting on a garbage bag on the front porch of 174 Sherwin Street.
Less than an hour later, the Matheson-Keely cabin through the woods across the street was broken into by a bear while the family staying there was out shopping.
Searles said the cabin, to his knowledge, was built in 1928 and had never been broken into until earlier this summer, when the front door was ripped open by a bear.
“This is the impact she [Webster] has had on our community,” said Searles. “This would be super-interesting as a case study, if only to show how quickly bears adapt to their environment.”