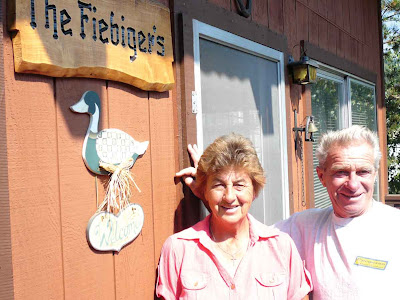 Marlene and Dieter Fiebiger have been married 51 years. (Photo: Geisel)

When Dieter Fiebiger was a young boy growing up in the Bavarian town of Erlangen, life wasn’t exactly fertile ground for dreamers. With Germany in the throes of World War II, dreams had given way to nightmares. But that didn’t matter much to “der junge” Dieter.
On that fateful day in 1945, when American and Royal British Air Forces attempted to bomb the nearby city of Nuremberg off the face of the Earth, Dieter didn’t run for cover like everyone else. Instead, he stayed outside to watch the planes fly by.
“My mom was yelling at me to come down to the basement, but I wouldn’t go down there. I just loved the planes, so big, fast, powerful. It was exciting,” explained Dieter earlier this week, with a twinkle in his steely blue eyes and a heavy dose of his Deutschland accent.
A couple of weeks ago, Dieter celebrated his 76th birthday hiking around the Twenty Lakes Basin with his wife of 51 years, Marlene. While most people Dieter’s age wouldn’t even think about hiking around lakes more than 10,000 feet above the sea, Dieter can’t see living life any other way.
“I always want to have a little fun and not just ‘umph, umph, umph’ all the time. You know, you can’t be too serious. You still have to enjoy life,” Dieter said, from across the kitchen table at the home he built in 1973, above Alpine Garage in Mammoth Lakes.

In 1952, Germany was a post-Apocalyptic mess. Hope, like much of the Krautland, lay in ruins. But somehow, Dieter’s young spirit remained strong and he still harbored dreams of one day owning his own automotive garage. His hopes for a happy future took an especially lucky turn the day a cute young “fraulein” moved in next door.
“I could look into her bedroom window from my house and I liked what I saw,” Dieter said, with a big, boyish grin beneath his mostly-full head of graying hair. “You know how it works. You go to a dance together and then you grow closer and closer and then you get engaged.”
By 1958, Marlene and Dieter were happily wed, and Dieter had just received a Master’s Degree in Automotive Mechanics. Despite being the youngest graduate in a class of 63 (half of whom didn’t pass the grueling, 15 day final exam), Dieter had difficulty finding work and the newlyweds had trouble finding a home.
“No one would hire me because they’d say, ‘du hast noch die Eierschalen hinter den Ohren,’ that I’ve still got eggshells behind my ears. It’s an old German saying.” Dieter explained, adding, “It was also tough to find any place to live because everything had been bombed to pieces. So we said, ‘Okay, Germany, goodbye.’”

The Fiebiger’s headed west across the Atlantic in a big, powerful airplane, not all that different from the ones Dieter watched more than a decade before destroy his homeland. Their first stop in North America was Toronto, Canada, where they lived with family. As is the case with German taught mechanics, Dieter had no trouble finding work. The couple spent four years living in the land where they say “Eh?” Soon, however, Dieter had begun to suffer from some serious desires to answer the call, “Go west, young man.”
“I wanted to see the Wild West,” Dieter said, waving his thick hands. So he left his job working on Jaguars and converted a 1953 Chevy so that the seats would fold down and make a big bed for the Fiebigers, which now included a daughter, Debbie.
For a few months, the young family explored, rolling through both the Canadian and American Rockies before heading to California to check out job offers Dieter had received in both the Bay Area and LA.
“They used to say that if you can fix a Jaguar, you can fix any car. So I had no trouble finding work,” he said.
Preferring the warmer Southern California weather, the Fiebigers settled in the San Fernando Valley and Dieter began working on the Jaguars of the stars in Hollywood and Beverly Hills.
“Bob Hope and Frank Sinatra were always very nice to me, always treated me like a friend,” said Dieter, who would occasionally have a drink with the “Chairman of the Board.”
Having grown up in the brewing haven of Bavaria, naturally, Dieter enjoys a beer now and then; although it did take a little while for him to get used to drinking beer cold, as is the custom in America.
“I only drink beer when I’m thirsty,” he joked.

After getting settled in their new home, the Fiebigers took their first trip to the Eastern Sierra. And much like the first time Dieter set eyes on Marlene, he was instantly smitten with Mammoth.
“As an immigrant you always look for what you left behind. For me it was the mountains around Bavaria, and I found it in Mammoth,” Dieter said.
The Fiebigers began to vacation regularly in Mammoth and by 1969 Dieter had saved up enough money to buy a lot on Center Street. It took four more years and several rounds with the County (Mammoth was far from being an incorporated town), before Dieter was given the okay to build a garage and home he designed and drew up himself.
Construction was completed that summer and on Dieter’s birthday, August 27, 1973, Alpine Garage officially opened for business.
“Alpine Garage had been my dream forever and ever and it finally came true,” Dieter proudly declared.
After getting his garage rolling, Dieter became active in the community. Over the next three decades he would, among other feats, found the very popular local chapter of AYSO (Youth Soccer), help found the Ski Education Foundation, sing in the Community Chorale, volunteer for Jazz Jubilee and the Ski Race Department, join the Lions (where he has been named “Citizen of the Year” three times and received the prestigious Melvin Jones Fellowship Award), and help found the Lutheran Church, at the corner of Old Mammoth and Meridian.
Dieter even placed the large wooden cross at the top of the church, for his youngest son, Kenny, who died of bone cancer shortly before the family moved to Mammoth.
“That cross is 14 feet tall, seven feet deep and seven feet high and I had to carry wood up to the top of that church 50 times to build it,” Dieter explained, as his ever-present grin faded for a moment. “I did it to honor my son, Kenny.”

Dieter’s other son, Michael, grew up in Mammoth and in Alpine Garage. BY the4 time his son turned 10, Dieter had him helping out around the shop, all the while preaching to his son the merits of learning a trade.
But “Big-er,” as he’s known throughout Mammoth (a nickname that aptly matches his personality, sense of humor and energy), much like most young men about to graduate from high school, wasn’t really sure what he wanted to do for a living.
As commencement ceremonies approached, Dieter grew nervous about his son’s future. Then one afternoon, Big-er came home with a local newspaper article that asked Seniors what they planned to do after graduation. Mike, as his dad calls him, had been one of those interviewed.
“He came home and handed me this paper and in it he said that he planned on going to college to be an automotive mechanic,” Dieter said as a monstrous grin spread over his face.” I dropped the paper. I was so happy and excited.”
The father and son team worked together until the day Dieter turned 65, when he retired and passed the reins off to his son and grandson, Johnny Teller. “I did my share. That was that,” he said.
Now Dieter spends his days as as an active grandfather of four, a Tourism and Recreation Commissioner (fighting for a Community Rec Center), competing in local 5Ks (usually winning his class), skiing in winter and running around as a referee for youth and high school soccer games during warmer weather months.
“My motto is: youth and sport is my support,” explained Dieter, who annually makes donations to 10 different youth sports organizations. “The fact is sports and bad habits don’t mix. That’s my belief,”
Another one of Dieter’s beliefs is that, as he said, “Our youth is the future of our country.” A future Dieter, as he always has, is very hopeful about.