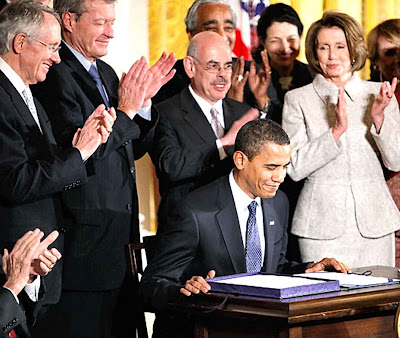 House Speaker Nancy Pelosi (right) and Rep. Henry Waxman (center right), who co-authored the Waxman Markey bill known as HR 2454 or “Cap and Trade,” got it through the U.S. House of Representatives, but getting a similar version through the U.S. Senate could be an iffy proposition. Few senators seem to be behind the legislation on that side of the capitol. Also pictured are President Barack Obama (seated), Sen. Max Baucus (center left) and Senate Majority Leader Harry Reid (left). (Photo courtesy Syracuse.com)

It isn’t often that national policies spark a reaction from local governments. But during its regular meeting Tuesday, Mono County’s Board of Supervisors discussed whether (and how) to state its position on the so-called “Cap and Trade” energy bill currently making its way through the nation’s capitol.
Supervisor Vikki Bauer sponsored the agenda item, which called for a resolution stating the Board’s opposition to the legislation. Bauer said U.S. Congressman Buck McKeon (R-25th District, CA) is “very much opposed” to Cap and Trade — not surprising, since Republicans are leading the charge against Cap and Trade. She also suggested that the state’s two Democratic U.S. Senators (Barbara Boxer and Dianne Feinstein) “should know how we think.”
“Cap and Trade” is actually the American Clean Energy and Security Act (also known as the Waxman-Markey bill, for its principle sponsors, or HR 2454). It passed the U.S. House of Representatives in June 2009. The Senate is expected to vote on its own version of climate and energy legislation before the end of the year, but support for any Cap and Trade bill is iffy, with 33 senators opposed to it, including 8 Democrats. (Boxer and Feinstein at this time are not in opposition.)
The House bill would cap carbon emissions at 17 percent below 2005 levels by 2020, gradually lowering the cap to 83 percent below 2005 levels by 2050.
In short, the “cap” is a legal limit on the quantity of greenhouse gases that a region can emit each year and “trade” means that companies may swap among themselves the permission – or permits – to emit greenhouse gases.
Proponents say Cap and Trade commits the country to responsible limits on global warming emissions and gradually steps down those limits over time. Setting what advocates say are “commonsense rules,” the legislation is intended to spark competitiveness and ingenuity in the marketplace.
Critics of the bill(s), however, say once the government limits the right to emit carbon and dictates that businesses buy it, the costs would inevitably be passed on to all consumers in the form of higher prices. Hit hardest, opponents argue, would be the “95% of working families” that were so important to then-candidate Barack Obama while running for office, because poor and middle-income households spend more of their paychecks on such things as gas, groceries and home heating.
“It’s a huge tax … the cost to anyone to change anything [when remodeling a home or business] will be astronomical,” Bauer said. If you want to change your windows, for instance, Bauer said the bill could trigger a force majeur that would in effect require the owner to bring the entire house up to Cap and Trade specs.
Supervisor Tom Farnetti said he doesn’t yet have enough information to make an informed decision. “What I know and have heard about it scares me, but I would like to read a copy of the bill.” (Note: At between 1,200 and 1,300 pages, we hope the Supervisor is an Evelyn Wood speed-reading grad.)
Supervisor Byng Hunt questioned whether it’s appropriate for a county entity to take a position on a national issue. “I can see sending a letter of support for the National Association of Counties (NACo) position on the bill.
NACo hasn’t yet taken a position on a mandatory cap and trade program, but Bauer related (and an interview on PublicCEO.com confirms) that new NACo President Valerie Brown said, NACo plans to “intrude itself” into the federal policy debate on environmental sustainability. “We are essentially left out of policy discussions where local government ought to be front and center,” Brown said.
Meanwhile, Sen. Boxer, Chairwoman of the Senate Environment and Public Works Committee and a primary sponsor of Cap and Trade, indicated that she planned to include the Energy Efficiency and Conservation Block Grant (EECBG) language in the bill – a program that NACo has said previously it does support. The EECBG was first authorized at $2 billion (but not appropriated) in a 2008 energy bill.
Supervisor Hap Hazard said he didn’t claim to have full knowledge of the bill, but added that from what he does know about it, he’s fundamentally against it. “I would be in favor of a letter to Congressman McKeon expressing our ‘concerns,’” Hazard said.
Chair Bill Reid also said he’d like to hear the Congressman’s concerns before drafting any verbiage on the topic. Bauer said she would meet with McKeon, get his comments and bring them back to the Board for consideration.

Mono County Health Officer Dr. Richard Johnson asked the Board to ratify a declaration of Local Health Emergency in advance of what could be an onslaught of H1N1 this fall. Don’t panic, however; Johnson said the declaration is akin to an Emergency Broadcast System test. “It’s not an actual emergency at this point,” Johnson explained. “This move is pre-emptive, an administrative tool.”
Johnson said the declaration is necessary so paramedics and other front line medical services personnel can get authorization to vaccinate other first responders and open avenues for out-of-area transfers to outlying hospitals, should those actions become necessary.
Thus far, the disease is proving to be an “efficient transmitter,” said Johnson, easily hopping from person to person, but not an “efficient killer.” He also said that the vaccine being produced probably won’t be available until the peak of infections passes, but added that the good news is the number of doses needed will probably end up being one instead of two, as was originally thought.
The declaration passed 4-1. Hazard dissented, saying he didn’t see enough of a trend to justify declaring an emergency.

Budget gets clean bill of health

And finally, the Board voted unanimously to approve a resolution adopting its fiscal year 2009-2010 budget. The $73.7 million budget (before contingency appropriations) is not only balanced (all the projected shortfalls are covered), but also reflects all the previously ordered department tightening and reductions.
Readers, remember these numbers, too: the budget also includes $4.3 million in reserves, as well as $500,000 in the Board’s contingency account, as well as 0 additional layoffs or other cuts. Finance Director Brian Muir said that situation easily puts us “probably in the top 10% of counties statewide.”