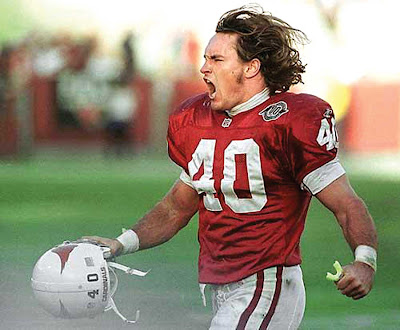 The U.S. Army attempted to make Pat Tillman one of its patriotic poster children when it sold the War on Terror to the American public in the aftermath of 9/11.
Tillman, a star professional football player for the Arizona Cardinals, turned down a $9.6 million free agent contract to enlist in the army following the 2001 NFL season.
He was subsequently killed in action by fellow troops in a “friendly fire” incident in Afghanistan in April 2004, an incident the U.S. Army desperately tried to cover up for as long as it could.
What many didn’t and still don’t know about Pat Tillman is that he was way more than just a football player. Krakauer describes him as extremely inquisitive, bright and steadfast.
He graduated from Arizona State University with a 3.84 GPA.
As his wife Marie said, “He saw his life in a much bigger way than simply, ‘I am a professional football player, and if I walk away from this, my life is over.’ Football was part of who he was, but it wasn’t the be-all/end-all. He was looking in other directions even prior to 9/11.”
He was also, contrary to what was disseminated in the national media, not a diehard supporter of war. Sure, he wanted to get the guys (al Qaeda) who had attacked America, but he was less than enthusiastic about the war in Iraq.
“I hope this war is about more than oil, money and power,” he wrote in his journal. “I doubt that it is.”
Author Jon Krakauer (“Into the Wild,” “Under the Banner of Heaven”) is, in a way, his generation’s Bob Woodward. His research is exhaustive and he knows how to build trust and get people to talk. He also seems to have a knack for knowing where the establishment’s lies are being stored.
He’s particularly thorough when it comes to the description of the friendly fire incident where Tillman was killed, and even though you’ve known for five years and another 300 pages that Tillman’s going to die, the account still inspires its fair share of anger, sadness and disbelief.
And the account of the attack on Tora Bora inspires its fair of anger, sadness and disbelief as to the general incompetence of military commanders. We had bin Laden and let him get away. Read the account and one can’t help thinking there was someone on the inside who didn’t want bin Laden captured.
“Where Men Win Glory” is available at The Booky Joint in Mammoth and at Spellbinder Books in Bishop.