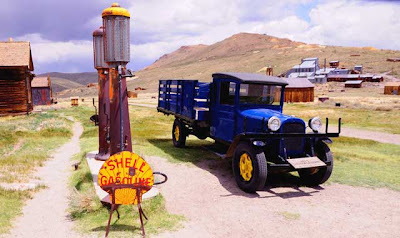 State parks Bodie, and nearby Mono Lake, both got a fill up on Gov. Schwarzenegger. Whether he’ll be able to top off their tanks next budget cycle remains to be seen, however. (Photo courtesy www.wunderground.com)

But if Hollywood can make a “Saw VI,” never say never when it comes to State budget decisions

Bodie and Mono Lake state parks, along with the rest of the state parks system, will remain open and continue operations, though their worries may not be entirely over.
On Friday, Sept. 25, word came from Sacramento that Governor Arnold Schwarzenegger would allow all state parks to remain open without increasing the Department of Parks and Recreation budget appropriation. Following the passage of the budget reduction in July, the Governor asked the Department of Parks and Recreation and the Department of Finance to work together on a plan to achieve $14.2 million in budget savings in the current fiscal year while mitigating the number of park closures.
Apparently they succeeded.
Prior to this breakthrough, it looked grim. Some 100 parks and beaches were on the state’s Parks Closure Committee’s list of targets for full or partial closure.
Even now, however, no one outside the committee has any idea what parks, out of California’s 270 facilities, were on that list. Several of the parks identified on earlier versions of the closure list had some of the highest attendance figures in the state park system.
Staying open will, however, still come at a price, particularly in the area of service reductions.
Savings will be realized as follows:
Maintenance and Equipment: Ongoing maintenance will be reduced for the remainder of 2009-10 and all major equipment purchases will be eliminated (Savings: $12.1 million).
Service Reductions: Hours and/or days of operation will be reduced at most State Parks, including reduction of expenditures on seasonal staff and reducing staffing and operations at Headquarters (Savings: $2.1 million).
Examples of service reductions include: (1) some facilities will close weekdays and be open on weekends and holidays, (2) portions of a unit may be closed, such as the back loop of a campground, (3) for a park with multiple campgrounds, one whole campground or day use facility may be closed while the rest of the park remains open.
Mono Lake Committee Executive Director Geoff McQuilkin was happy to hear the good news, but added some words of caution.
“The Governor has promised that Bodie and Mono Lake will remain open and that’s great news for the parks and our local tourism economy. Bodie and Mono Lake received more than 10,000 public letters and petition signatures of support and clearly they made a difference,” McQuilkin said. “The Committee is staying vigilant on this issue, however, because we’re all but certain to see this problem return again next year. The governor still plans to implement the $14 million budget cut to the state parks department this year and already has a bigger $22 million cut scheduled for next year’s budget.”
Meaning many parks could find themselves right back where they started next year.
In terms of fee revenue, Bodie collects a significant amount, but he pointed out that revenue still goes back to the state parks fund. Parks have been moving to a “hybrid” (or partial share out) system, but are largely looked at in terms of how much revenue they generate on an individual basis.
Currently Mono Lake has about 1.5 full-time employee positions. Bodie has a staff of 4 rangers, in addition to administrative personnel and other positions.

See you in court …

Closing the parks could have been a disaster for the state on a number of levels. “If you look at in terms of the law, those parks are public lands, bought in many cases with public money and maintained with taxpayer dollars, and come with certain basic requirements that they stay open to the public,” said McQuilkin.
A number of parks are funded in part with grant money for improvements or federal dollars that come with stipulations they remain open, or risk forfeiture (and possible reimbursement) of grant dollars. Since 1965, California has received $286 million in federal funding for 67 state parks from a program funded by mineral leasing revenues.
According to a spokesman for the National Parks Service, California would also stand to lose eligibility for some $18 million in pending payments from the fed, not to mention land that could conceivably have been repossessed by the federal General Services Agency. Those lands would have essentially been auctioned (though the fed prefers the term “re-disposed”) to the highest bidder.
According to an internal memo drafted by state park department’s attorneys, it’s also likely that state parks would have been “liable for breach of contract” with 188 agreements the state signed with private companies that provide concession services, from restaurants to boat rentals to gift shops. Those concessions generated $89 million in gross sales last year.
Further, the memo said, if people entered closed parks and are injured or start fires, the state “can be held responsible for dangerous conditions,” even if the park visitors were trespassing.

Then there’s the money …

Economic studies on the parks indicate the state takes in $2 in sales tax for every dollar they spend on parks. “They’re a moneymaker … if the legislature had cut them, they’d have had to figure out how to replace that revenue,” McQuilkin stated.
In a June 3 Los Angeles Times Op/Ed (“Closing California’s state parks: too costly?”), it was opined that the cost savings ($140 million) pales by comparison to the $26 billion total deficit. The Op/Ed went on to suggest that if one meth lab is set up on public land and ignites a fire, “The cost of a single catastrophic fire could wipe out [much] of the savings from closing parks.” Historical precedent supports that assessment. One recent forest fire that burned down 37 homes and 56,500 acres of land was caused by an “antipot copter” SEARCHING for weed. Putting out the fire took 2,700 firefighters, 17 helicopters and 10 air tankers, with an overall price tag of about $21 million.

One state legislator who is still watching things with a hawkeye: Senator Dave Codgill (R-14th District/Modesto).
“The Senator is keenly aware that his district already has higher unemployment than the state average and he considers rural areas especially sensitive, particularly when it comes to cuts and closings,” commented Sabrina Lockhart, Communications Director for Cogdill.
Cogdill was among many Republicans in the legislature who, along with Gov. Schwarzenegger, opposed a $10 to $15 fee on vehicle licenses to subsidize parks, which would have more than covered their operational costs. At this point, it appears that fee may not be needed.
“Our state parks contribute greatly to our economy, so it would have been pennywise, but pound foolish to close them,” Cogdill commented. “I applaud [the] Governor for finding alternative solutions … but we still need budgetary reforms, such as a spending limit, to protect our parks from the instability of the state budget.”