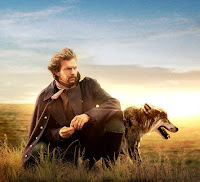 Kevin Costner with Two Socks in “Dances With Wolves.” If the BIC’s efforts to acquire land are dragged out any longer, we may be able to turn it into our own Hollywood epic! (Artwork courtesy Orion Pictures/MGM Home Video)

Bridgeport Indian Colony renews efforts at land acquisitionAfter 14 years and several dashed attempts, many organizations would have given up long ago on a plan to acquire land, but not the patient, determined folks of the Bridgeport Indian Colony (BIC). Colony Chairman Art Sam, Tribal Adminstrator Charles White and Counsel Mark Levitan gave Mono County’s Board of Supervisors a head’s up on Tuesday that the BIC intends to pursue a land transfer of two parcels to the Colony from the Bureau of Land Management.
One parcel involves 7.1 acres in Walker, currently being leased by the BLM to the Toiyabe Indian Health Project (TIHP), which will be taken into trust under the Tribal Lands Act. A healthcare center previously operated on the property, but closed in 2007, supposedly due to poor management. At that point, the BLM extended the lease to give the Colony more time to figure out its next move. Sam said the plan now is for a new, improved clinic to reopen on the site, which will include dental services by spring 2010, which representatives from TIHP added would be available to Indian and non-Indians alike.
The second parcel is 31.8 acres in Bridgeport adjacent to the reservation. Environmental analysis and and a land use plan including a recreation center, RV park and one single-family residence, are both complete.
Actually the site is 40 acres in total, but according the BLM’s 2005 Management Plan, some of the acreage will go to Caltrans acquisition of the Hwy 182 right of way along the property.
Both parcels have been listed as “Ready for legislative re-disposal,” according to the U.S. Congress.
Sam said he’s met with Larry Echo Hawk, Assistant Secretary for Indian Affairs, as well as U.S. Senators Barbara Boxer and Dianne Feinstein, and U.S. Congressman Buck McKeon, among other, all of whom he said have agreed to work with the Colony to make the deal happen. He than asked the Board to consider adding its voice of support to the effort.
“We’ve been trying to acquire this property since 1994,” Sam recalled.
“It’s been a horrendous process for you all,” observed Supervisor Byng Hunt.
“Sure has,” Sam replied.
Marshall Rudolph said the Board has visited this issue previously, citing work on a Memorandum of Understanding dating back to the late 1990s that was never finished due to what he said were issues between the Board and the Colony.
“Many of those issues have been addressed,” White responded, “and I think you’ll find we’re a lot closer now.”
“If we can work out any remaining issues, I’d be supportive,” stated Supervisor Tom Farnetti. “The jobs and sales taxes created by this type of development means community benefits for the whole county.”
Some of those issues, however, may still be sticking points. Board Chair Bill Reid reminded both sides that gaming was one issue that was key in nixing the previously mentioned MOU. Sam said he took Reid’s point, but wasn’t willing to go further than that. “We’re not willing to give up our rights under federal law,” Sam told the Board.
Another concern: whether the loss of the property from the County’s tax rolls will generate any significant loss of revenue. In-lieu payments to the County may end up coming in less than assessed property valuations, but Finance Director Brian Muir said he would have some figures addressing those details ready for the Board by the time they next took up the item.
Levitan suggested the Board should consider the similiarities between itself and the Colony. “You have a significant amount of land with which to operate your government. The tribe is trying to run a government without a tax base,” Levitan said. “That government has only been around since 1976. It has things it wants to do, and it can’t do them without revenue.”
Also being looked into is Transient Occupancy Tax (T.O.T), and whether it would be applied to any RV or other “motel”-like facilities set up by the Colony. “T.O.T. is a tax on transients, not the land owner,” Rudolph pointed out. “The Colony may not be exempt as it is with sales tax.”
“There are other hotels on tribal lands that currently are not required to collect County taxes,” Levitan responded.
Share