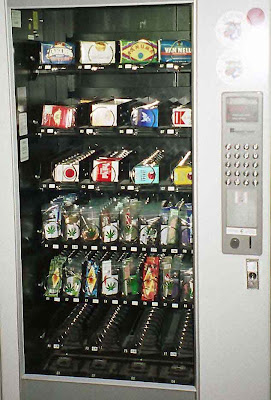 Okay, we may never see these in the Eastern Sierra, but we had to show you one of these actual licensed 24-hour medical marijuana vending machines being used since last year by the Herbal Nutrition Centre in Los Angeles. Filled with small sachets stuffed with buds of different sizes and strains, the machines dispense marijuana in packets of 7g or 3.5g. Access is strictly controlled by round-the-clock security guards. Only the people having legal medical prescriptions will be able to use the machine, and they need a pre-paid swipe card with fingerprint ID to get the drug. (Photo courtesy www.topnews.in)

… And won’t get off until it’s thoroughly studied

Are medical marijuana dispensaries coming to Mammoth?
Mammoth Lakes Town Council responded with a definite ‘maybe’ at its regular meeting Wednesday.
While Council may have elected to enact a 45-day moratorium prohibiting dispensaries within Town limits while it studies the issue, Councilmembers appeared amenable to the idea … provided dispensaries can be properly regulated.
What those regulations may entail is up to Town Manager Rob Clark or his designee, presumably Mammoth Lakes Police Chief Randy Schienle.
Councilmember John Eastman suggested that Town staff solicit input in this regard from Wave Rave Snowboard Shop owner Steve Klassen and Mammoth Lakes Planning Commissioner Tony Barrett.
The biggest concerns expressed Wednesday night were 1. the potential location of a dispensary, and 2. preventing minors’ access to marijuana.
Klassen was one of the persons who instigated the Town’s address of the issue with his submission of a business application for a dispensary to the Town last month.
Klassen said he’s put a lot of thought into whether he wished to ‘out’ himself as a marijuana user, but ultimately, decided that the time is now to step forward.
He had three reasons for his support of creating a dispensary in Mammoth.
First is access. Currently, Klassen has to drive to L.A. to get his medical marijuana.
Second is education. As his child grows older, he wants a more open and fact-based discussion about marijuana to unfold. A legal medical marijuana dispensary pushes the paradigm towards truth, he said.
Third, disallowing dispensaries just encourages the black market, and it’s just a matter of time before an unwitting backpacker stumbles into a life-threatening situation (a lucrative backcountry crop defended by hostile growers).
Klassen said the possibility of opening a medical marijuana dispensary in Mono County only very recently became a reality.
Under state law, he said, a person needs a DHS (Calif. Dept. of Health Services) card to operate a dispensary and Mono County only began issuing such cards in October, a full 13 years after the passage of Prop. 215 in 1996. Prop. 215 exempts medical use of marijuana from criminal penalty.
Klassen, a professional snowboarder who has won numerous world titles, attributes the longevity of his career to both yoga and medical marijuana. He has competed at a world-class level into his 40s in a sport dominated by those half his age.
Town Attorney Peter Tracy advised Council that it can pass one extension to its 45-day moratorium. The maximum length of that extension is 10.5 months. Town Manager Rob Clark advocated the moratorium plus maximum extension while the Town waits and watches to see how other communities approach the issue.
Mammoth resident Hans Ludwig said he thinks the issue should be delegated to Mammoth’s Planning Commission. “We don’t need to keep dodging it,” he said.
Which brings us to Geisel’s research …

Legal precedent for California could be determined by rulings in some fierce legal battles being waged before some of the state’s highest courts.
Medical marijuana advocacy group Americans for Safe Access (ASA) has already threatened to file a lawsuit against the City of Los Angeles if it adopts an ordinance that bans the “sale” of medical marijuana. The Los Angeles City Council was expected to vote as early as Wednesday on a medical marijuana dispensary ordinance proposed last Friday by City Attorney Carmen Trutanich. The proposed ordinance states that, “No sale of marijuana, or of products containing marijuana, shall be allowed, nor shall the manufacture of marijuana products for sale be permitted.”
ASA was also involved in another case, Qualified Patients Association (QPA) v. City of Anaheim, in which California’s Fourth Appellate District in Santa Ana heard oral arguments on Sept. 23. A result in that particular case could be key in determining whether local governments can ban medical marijuana dispensing collectives from operating.
During that proceeding, ASA argued against such bans, claiming that under state law local officials have an obligation to allow for the operation of lawful dispensing collectives or dispensaries, such as the plaintiff, QPA. “The City of Anaheim cannot hide behind federal law,” said ASA Chief Counsel Joe Elford. “Local governments cannot simply ban an activity that has been deemed lawful by the state.”
QPA filed its lawsuit shortly after Anaheim adopted a ban on dispensing in July 2007. QPA had been in operation for about 5 months prior to the ban. The Orange County Superior Court ruled in September 2007 that the City of Anaheim could prohibit medical marijuana dispensaries from operating within its city limits.
The Anaheim case has drawn a lot of attention, as more and more local governments confront the issue of access to medical marijuana. Multiple statewide law enforcement associations have filed briefs in support of Anaheim, as have nearly three-dozen cities, including several in Orange County: Costa Mesa, Cypress, Fullerton, Garden Grove, Newport Beach, Orange, Placentia, Tustin and Westminster. More than 40 localities have adopted ordinances regulating medical marijuana dispensaries, though at least 120 localities (17 in Orange County) have banned their operation outright.
Shortly after the appeal was filed, the California Attorney General issued guidelines in August 2008 recognizing the legality of storefront dispensaries as long as they comply with certain operational requirements. For instance, dispensaries must operate as a collective or cooperative on a not-for-profit basis, sell only to member patients and primary caregivers, and pay state sales tax. In addition, a November 2007 ruling by the Fourth Appellate District Court in Garden Grove v. Superior Court said that federal law does NOT trump the state’s medical marijuana law, and that local officials must uphold state, not federal, law.
The Anaheim case is the first lawsuit of its kind to reach the appellate courts in California, and stands to shape the issue of access to medical marijuana for the state. “Dispensaries serve a critical function for our most seriously ill and should be encouraged, not banned,” said ASA Media Liaison Kris Hermes. “Thousands of patients in California cannot cultivate their own medical marijuana and rely on local dispensaries for safer access than the illicit market.” An increasing number of medical marijuana states are drawing up laws to deal with the issue of local distribution, including New Mexico and Rhode Island.
A decision by the Fourth Appellate District Court in the Anaheim case could be handed down by year’s end. More information on ASA’s legal activities can be found at www.safeaccessnow.org.