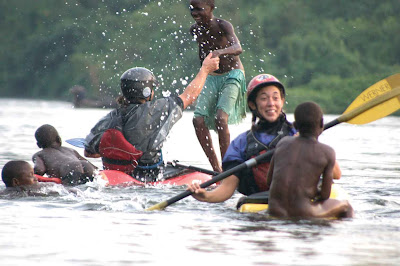 Kayakers in a scene from “The Last Descent,” which will screen as part of the Mammoth Lakes program. (Photo courtesy FOI)

The Wild & Scenic Environmental Film Festival is the largest of its kind in the nation, and host organization Friends of the Inyo is bringing it back to the Eastern Sierra for a third year. The local festival, to be hosted at the Cerro Coso College campuses in Mammoth Lakes and Bishop, is essentially a scaled-down lineup of films featured in the main Nevada City festival, held each January.
Organized by activists for activists, Wild & Scenic is designed to inspire awareness in communities across the nation. The festival is hosted by groups, such as FOI, and organizations in 17 different locations around the country. Sponsors, such as Patagonia, allow the organizations to host smaller festivals to generate awareness about environmental issues and build membership.
This year, Mammoth’s program highlights wildlife and land preservation, while Bishop’s program will feature human-interest issues and environmental justice. FOI’s custom-selected programs Mammoth and Bishop are a mix of short and long films, some entertaining and some serious. One film even features the voice of the Walrus himself, John Lennon.
Although the films feature communities and issues around the globe, many of the ideas covered in the local film selection will help Sierra residents reflect on topics that relate to home, said Stacy Corless, Friends of the Inyo Communications Director.
In “The Last Descent,” showing in Mammoth, a group of world-class whitewater kayakers descends some of Asia’s and Africa’s most striking rivers, such as the White Nile River in Uganda, which also happened to be threatened by dam projects. “You’ll see people kayaking through Nepal,” Corless pointed out, “but those issues are relevant in California as well.”
Another must-see, “American Outrage,” which shows in Bishop, is about two elderly Western Shoshone sisters who have spent their lives raising cattle in north central Nevada. The film dives into their dispute with the federal government after the sisters are sued in 1974 for trespassing on public land without a permit.
“It’s a moving film,” Corless said. “The public lands issues hit close to home in the Eastern Sierra.”
One of the films to be played in Mammoth is a local film not part of the Wild & Scenic Tour, but Friends of the Inyo decided to include it, as it fits with the theme. Created by local filmmaker, Dave Huebner, “Winter in the Woods” is a ski film that documents Huebner’s caretaking experience at Reds Meadow, where he unlocks the quiet, snowy mystery of the Sierra backcountry slopes.
“Essentially, the festival is a party to celebrate the local environmental movement,” Corless said. “It brings people together and inspires them to take action.”
The festivals in the past two years have sold out, so it’s wise to snag tickets early, Corless said. Both programs will start at 7 p.m. on Dec. 4 in Mammoth and Dec. 5 in Bishop. Tix: $10 per person/per night. Area students are admitted free with valid ID. Join or renew their Friends of the Inyo membership now or at the event will receive a free ticket.
More info: call 760.873.6500 or go to www.friendsoftheinyo.org.