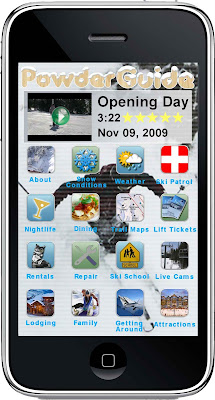 The whole Mammoth Chamber for $1.99? President Eric Wasserman says it’s a great value … but members have to help sizzle it. (Image courtesy PowderNation)

If you own an iPhone or Blackberry, or any number of equivalent gadgets, chances are you use “apps,” lingo these days for small, single-purpose “applications,” aka software programs. When they first surfaced, as with a lot of emerging technology, most “apps” went to one of two extremes: useful and mundane, or time-wasting and frivolous. For every real-time weather widget there was another one that told you the real-time wait for any line at a Disney theme park. No kidding.
Lately, however, at least one company took the “app” and actually seems to have come up with one very practical use for it: putting the membership of a ski town’s Chamber of Commerce at your fingertips … and Mammoth’s Chamber is getting ready to go cutting edge with it. Partnering with Santa Barbara-based Powder Nation, Chamber President Eric Wasserman is so sold on the idea, he’s already working with Chamber members on organizing content to upload to the new “app,” which should be available for users who frequent Mammoth to download by month’s end.
The idea, according to Powder Nation’s Julien Bassan and Sunny Zaman is for the company’s PowerGuide app to make it easier for Mammoth visitors to “do less planning and have more fun.”
Skiers and riders will benefit from GPS guided directions, automatic dialing, interactive maps, webcams, videos, reviews and more. Sure, the PowderGuide application will have all the expected features … current Mammoth Mountain conditions, trail maps and ticket info, but it will also give visitors easy access to lodging, restaurants, area attractions, transportation, equipment rentals and shopping, including real estate. And during summer, the PowderGuide’s content can be easily adapted to promote summer resort activities, as well.
Who knows … a button on the PowderGuide may even give you access to The Sheet and TheSheetRadio.com, as well as other local media and information outlets.
Bassan and Zaman, two college buddies who formed Powder Nation based on their mutual love of traveling and the outdoors, are absolutely certain they’ve hit on a constructive use for the “app,” one they think will be a huge convenience for other outdoor enthusiasts.
“About 80% of mobile users between ages 17-30 carry a smart phone,” the two point out. “And between 2008-2009, roughly 30 million iPhones and 26 million Blackberrys were sold. We’re talking about a massive user market.”
Plans are for it to be linked to social networks such as Facebook and Twitter.
“With Facebook and Twitter, you don’t just come up to ski or board, you can also bring your friends with you, virtually speaking,” Bassan observed. “Track your runs, amount of vertical, your family and ski pals [via a GPS-linked feature] … upload pictures and video … then go to the restaurant locator to decide where you want to eat or go to a happy hour. It’s all there for you … and tons more. For two dollars, you’ve got Mammoth in your pocket.”
Wasserman is stoked about the app and what it could mean for generating area business traffic. He’s on a quest, in fact, to make sure Chamber members are not only included in the app, but also help promote its use as well. “It’s in your best interest to generate sizzle through businesses,” Wasserman said to the business community. “This tool will help drive potential customers to your business.”
Having already inked a basic content agreement with Powder Nation, Wasserman said every member will get a free basic package on the app, loaded into a pre-fabricated template that Zaman said is fully customizable. According to Wasserman, more detail can be added to suit individual businesses, though that wiill come at a modest fee. That pricing structure, however, is still being worked out and details will be announced at an event in the very near future.
Bassan and Zanan said the PowderGuide app will also be available for use in resorts across North America and Europe including Mammoth, Mountain High, Northstar, Aspen, Vail, Killington, Whistler, Val D’isere and Chamonix. Editorial coverage in Transworld Snowboarding, Snowboarder Magazine and the National Ski Area Association Journal will go hand in hand with a upcoming ad blitz.
Meanwhile, expect the PowderGuide app to sell for $1.99. Both the iPhone and Blackberry versions are scheduled for availability simultaneously. Look for the app at iTunes and other online outlets where you buy your apps.