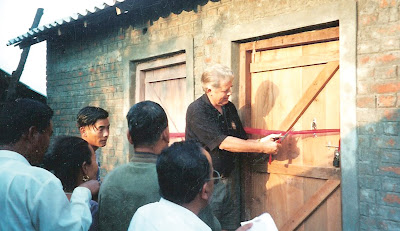 Wright says one family slept under a thatched roof with their cows until Habitat volunteers helped build this home. (Photo courtesy Dan Wright)

Vacation with a purpose

If you’re interested in taking a “vacation with a purpose,” you may wish to join Mammoth Lakes resident Dan Wright in Nepal next fall.

Wright will be one of 300 Habitat for Humanity volunteers whose goal will be to build 30 homes. The trip is scheduled from Oct. 1-9.
Habitat, which was founded in 1976, has built more than 350,000 homes worldwide. It’s goal, as stated on Habitat’s website (www.habitat.org): “To eliminate poverty housing and homelessness from the world and to make decent shelter a matter of conscience and action.”
Wright said he became interested in the organization after reading “Everything to Gain,” a book co-written by former President Jimmy Carter and his wife Rosalynn. The Carters have been involved with Habitat since 1984.
Wright first volunteered in 1998 and hasn’t missed a year since. The trip to Nepal will be his 12th for Habitat.
That he continues to go back for more is not unusual. Locals Richard Good and Sharon Thomas Good plan to join Wright in Nepal. It will be their fifth trip.
The program works as follows. Habitat for Humanity volunteers pay their own way (airfare and in-country expenses), while local affiliates supply land and materials. Habitat has some basic requirements of those it constructs homes for. 1.) That they contribute “sweat equity” to the project. 2.) That they have a job. 3.) That they ultimately pay back the cost of the materials (at no interest). That money is then reinvested into the construction of more homes.
In the caes of Nepal, Wright estimated that homeowners would be responsible for paying back approximately $800 over a 12-year period.
“Habitat has successfully removed the stigma of charity by substituting it with a sense of partnership. The people who will live in the homes work side by side with the volunteers, so they feel very much that they are on an equal level,” according to former President Jimmy Carter
Wright described the homes Habitat builds as “cookie-cutter, about 30-meters square.” You don’t need experience to volunteer. Age isn’t a factor (the majority of volunteers are between 35 and 70), though you must be in reasonably good health. And you must be willing to appreciate the “rustic accommodations.”
But it’s also, Wright added, off-the-beaten path and a more “local” experience.
Sheet: What percentage of volunteers are women?
Wright: I’d say one-half to two-thirds. On my last trip to Romania, we had three men and six women.
When asked what his most memorable experience has been over the past dozen years, Wright wouldn’t point to a single event. Rather, he said, it’s a cumulative experience.
“Every building, every team, every locale is unique.”
As a special feature of this year’s trip, Wright said a 6-day trek (with guide) is planned for after the build. “You’ll stay in tea houses, have all your meals prepared and even have your packs carried by water buffalo.” Sounds pretty posh.
All for just $285.