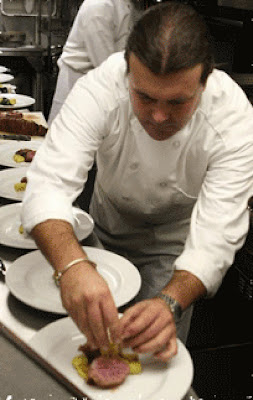 Kid in a candy store may not be apropos in describing Jim Demetriades’s excitement at reopening Rafters restaurant this week.
Kid in a walk-in freezer might be a better description.
There was Demetriades, preparing dinner in the kitchen for family and friends as I walked in the door looking for putative chef Kerry Mechler.
“He’s gone home for the night … but would you mind giving me a hand with this cheese wheel?” asked Demetriades as I entered the labyrinthian kitchen.
“Would you like to stay for dinner?
“My wife’s expecting me.”
“She’s invited, too.”
Note to Mammoth: Talk about media relations!
The curtain on the new Rafters (next to the Sierra Nevada Lodge on Old Mammoth Rd.) was lifted on Tuesday, liquor license be damned. (Issuance of that license is expected any day now). The Sheet sat down with Kerry Mechler recently to figure out what to expect once he wrests control of the kitchen.
“He [Jim] originally wanted to do an Italian restaurant … but I convinced him to do a “New American” restaurant with Italian influences.
What is new American?
Deb Pierrel (a consultant for Jim Demetriades), who just happened to be in on the conversation, chimed in, “It’s a blend of Mediterranean/European cuisine with the comfort of classic American.”
What is new American? repeated The Sheet.
Think baked pastas and veal osso bucco, she said, at which point I moved on because I didn’t know what osso bucco means.
What I did gather is that Mechler will just be doing much of what he’s already been doing at Petra’s Bistro, Meaning there’s a good chance you’ll be able to order his famous house rolled potato gnocchi at Rafters.
“My food’s my food … and I’m going to be creating new stuff here as we develop.”
Mechler also promises daily menu changes and seasonal foods.
Mechler’s #2 will be sous chef Karl Dawson, who has past experience working at the Westin Monache and Restaurant Skadi.
How did Mechler end up at Rafters? General Manager Don Catalano, whom Mechler managed for once upon a time at the Charthouse, called him for advice about opening a restaurant. “I became the advice,” said Kerry.
Prior to landing the Rafters gig, Mechler had tried to negotiate for the former Restaurant LuLu location in the Village, but the deal fell through when investors backed out at the last minute.