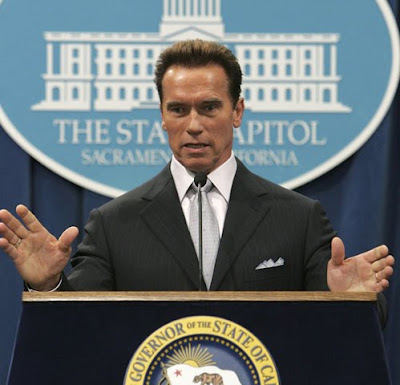 After Board Chairman and Mono County Supervisor Bill Reid passed away in October, his fellow Supervisors decided to ask Governor Arnold Schwarzenegger, who according to state law is obliged to fill such openings, to avoid making an appointment and further let the Board know in a timely manner if he does not intend to appoint a replacement to Reid’s seat.
Statewide, eight other counties have open seats from supervisors who have passed in office, but Mono County, it turns out, is the only one asking him not to make an appointment. While no formal decision from the governor has been communicated to the Board, during a recent visit to Sacramento late last week, Supervisor Hap Hazard reported that he did speak with the governor’s office about the open seat.
During the call, Hazard said the governor’s office told him Schwarzenegger is “very sensitive” of having a 2-2 vote on a critical issue, as happened recently in another county with a similar open seat on its board of supervisors.
“The Governor has heard our concerns and positions, but said he’s also looking at the larger statewide concerns,” Hazard said. According to his office, the governor doesn’t want Mono (or any other county) to go through a new budget cycle without a full dais of supervisors.
The governor may well decide to make filling Reid’s seat more of a priority, and is reportedly being lobbied by an unidentified “third party” to make an appointment quickly.
Indications are that five people have either spoken to the governor’s office or whose names have been submitted for consideration, but he added there has been no confirmation as to who those names are or how they were presented to the governor.
Recent word from Sacramento indicates the governor may be leaning toward making an appointment. “Of course, we’d prefer he didn’t,” Board Chair Byng Hunt told fellow Eastern Sierra Council of Government members during its last meeting of the year on Dec. 18. “The Board would rather see the voters decide who they want and hold off until the June election.”
In other news, Supervisors approved roughly $131,000 in “adjusted base compensation,” or salary increases, to existing contracts with several County employee groups, including unions and bargaining entities representing law enforcement, paramedic and public employees.
Those may be viewed as an anomaly, given the state’s economic prognosis next fiscal year, but the increases are not reckless spending, and are in fact accounted for in the County’s current budget. The Board, however, qualified the adjustments with a big BUT, saying it wants to honor both its contractual agreements and County employees, but if things go badly, such increases could be sidelined indefinitely to avoid more drastic actions, such as layoffs and other cuts.
“We’re looking at some potentially dark days ahead,” Hazard said, a warning he’s issued a few times before. “We’re doing the best we can, but we did want to give you a head’s up that things could get difficult in times to come.”
Tom Farnetti agreed. “The state is looking as though it will be $25-35 billion in the hole again next year, and property and sales taxes may be on the decline,” Farnetti reminded County staffers. “We had to take 1.3 million from reserves to balance the budget and we may have to dip into that again next year to help make things equal.”
“I’d rather freeze salaries and benefits than have to lay off people,” Hunt said. “Employees should know that we have a responsibility to be fiscally prudent.” During the final meeting of the Eastern Sierra Council of Governments, Hunt told his fellow Council members that the County may well have to get used to hearing the Board use the word “no” a lot during 2010.