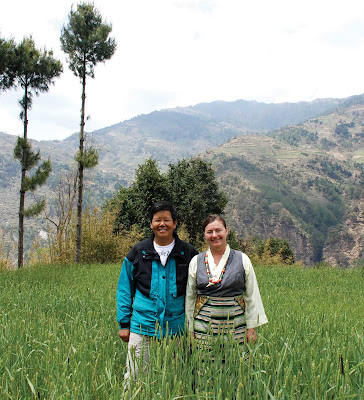 Wangdowa Sherpa is not your typical ski town bum.
First off, he doesn’t smell like Cheech and Chong, but rather like curry and turmeric. Second, his dark thick hair is always perfectly coiffed and not just stuffed under a wool cap like an unruly yak. Last, and most important, Wangdowa doesn’t do most of his conversing in inebriated monosyllables—instead, he comfortably communicates in a half-dozen languages.
Wangdowa Sherpa was born and raised in eastern Nepal, in a small village tucked some 7,900 feet high in a range of the Himalaya called Sierra Punchi. There he spent his first decade helping his five brothers and two sisters farm wheat and soy beans, taro roots and potatoes and raise animals like yaks, sheep and cows in one of the rainiest regions in the world.
”I never need to see rain again. I’ve experienced too much already,” Wangdowa explained, flashing a smile as warm and encompassing as the sun on a bluebird mountain day.
Growing up in the Himalayas, the first language Wangdowa learned to speak shares a title with his surname of Sherpa—an indigenous, unwritten language. And his first dream was to summit the nearby Mount Everest, the highest peak in the world, some 29,035 feet above the sea.
Wangdowa began his second decade by moving from the farm to the big city of Katmandu, where he began to master languages like Nepalese and Hindi, and work on Tibetan and English. He also began to fine-tune his dream to not only summit Mount Everest, but to be the youngest person ever to do so.
So as Wangdowa entered adolescence, he didn’t start courting teenage gals like other boys his age, but he turned his favors toward Mount Everest guide services instead.
“I even bought an expensive bottle of French wine to send to one of them,” Wangdowa said, as his dark eyes sparkled with a hopeful, energetic glimmer.
Eventually, he was able to woo his way into a job, and as Ronald Reagan’s ruling of the roost in America was coming to a close, Wangdowa got his chance to become the second youngest person to hike the mighty Mount Everest. But all did not go as planned.
Working as a guide and a cook, Wangdowa was able to reach 27,000 feet before Everest’s infamously foul weather put an end to the expedition. The trip was considered a success, however, and Wangdowa was awarded a certificate of recognition from the Mountaineering Association of Nepal.
Wangdowa then spent the next several years guiding trekking trips around the Himalaya and thinking about his next big goal in life—to graduate from college. While guiding a group of Americans, a couple from Oakland took to Wangdowa and offered him a free place to stay in the Bay Area for a couple of years so he could get started on his latest dream.
By the middle of the Clinton Administration’s reign in America, Wangdowa had not only earned a degree in Environmental Studies from Cal State Hayward, but he had founded the school’s International Student Fellowship program. Meaning the boy who grew up speaking an unwritten language in a remote corner of the Himalayas, on the other side of the world, had achieved his dream and graduated from college in the English speaking Golden State.
“Education became my Mount Everest, and this time I made it,” Wangdowa said, as we sat at booth at Café 203, the highly-acclaimed new Indian restaurant in the Best Western, where he now works as a chef.
As for how he wound up in Mammoth, well eventually Wangdowa decided to try to woo more than just guide services.
After graduating, Wangdowa moved back to Asia to open up his own eco-tour guide service. Political strife in Nepal drove him to Thailand, where he learned to speak Thai and to run a successful guide service running treks into India and Nepal. Thanks in part to the tasty, authentic meals Wangdowa offered, Sherpa-Travel (www.sherpa-travel.com) became popular with Americans, and one such woman from Lee Vining caught Wangdowa’s fancy. They bonded during a trek through southern Thailand and after Wangdowa came to visit his American sweetheart, he was hooked—not only on her, but the Eastern Sierra.
“It’s a great love story,” a starry-eyed Deanna Sherpa explained. “We’re definitely soulmates.”
“The elevation and mountains here are perfect for me. It feels like home,” Wangdowa said, adding, “and I like that it doesn’t rain much.”
The couple now lives in Mono City and Wangdowa thinks nothing of his commute to Mammoth Lakes. “When you’ve traveled all over the world, Mono City to Mammoth is nothing,” he said with a chuckle.
Besides cooking tasty authentic Indian and Nepalese-inspired dishes, which are served buffet-style and made up of whatever fresh ingredients Wangdowa can get his hands on each day, he still runs guided treks to India, Nepal and Thailand. For he still loves to share that part of the world with people, but not as much as he loves his wife.
When I told him that I was going to send a pretty local waitress who’s planning a trip to India over to talk to him, Wangdowa replied, “Oh, you don’t need to send me any pretty girls, Mike. I’m all ready married.”
Wangdowa Sherpa is a mountain man, as well as a husband, an eco-tour guide, a gardener, an acclaimed chef, a college graduate and he even skis. He’s just not your typical ski town bum—not by a long shot.
If you’d like to contact Wangdowa about a trip to the Himalaya, Southeast Asia and/or Northeast Asia, visit Sherpa Travel Inc. at www.sherpa-travel.com