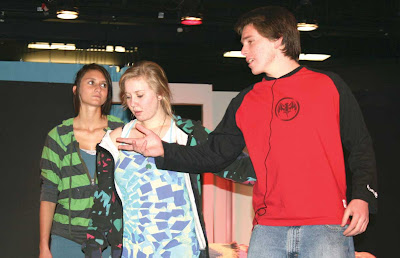 MHS Drama Director Kevin Worden and the Mammoth High School students who are cast and crew on the school’s production of “The Skin of Our Teeth” knew they had their work cut out for them.
Thornton Wilder’s Pulitzer Prize-winning 1942 dramedy is an intellectual think piece, a surreal “ride” through the timeless human struggle, viewed through the eyes of a New Jersey family. Think of it as a broader, slightly more dysfunctional version of Disney’s “Carousel of Progress.”
The material isn’t easy for more experienced actors (most don’t attempt it until at least college), but Worden had a sense they (and he) were up to the challenge.
Based on the performance in Wednesday night’s opener, it appears he was right.
The main characters of the play are George and Maggie Antrobus (from the Greek meaning “human” or “person”), their two children, Henry and Gladys, and Sabina, who appears as the family’s maid in the first and third acts, and as a beauty queen temptress in the second act.
The play’s action takes place in a modern setting (Excelsior, New Jersey), but is full of anachronisms reaching back to prehistoric times, and characters who are drawn from figures in both the Bible and classical literature.
While the Antrobus family remains constant, the three acts do not form a continuous narrative. The first act takes place just prior to an impending ice age, with a sort of “Leave it to Beaver”-meets-”Flintstones” staging.
The second act takes place on the Atlantic City Boardwalk, referencing everything from the biblical “Great Flood” (Noah’s Ark) to Sodom and Gommorah to the Roaring Twenties. Act III takes us to the end of the world, as Maggie and Gladys emerge from a bunker at the end of a long war.
Ideas are challenged, particularly how mankind’s history repeats itself with increasing global interaction and its capacity for both destruction and for good. Art and literature, the play posits, advance our humanity with empathy, tolerance, vision, but technology doesn’t necessarily advance human nature.
Presenting all this is a cast that, especially considering they’re high school students, could hardly be better. Elliot Rodriguez delivers a, quirky Mr. Antrobus, with a sly hint of Matthew Broderick. Cassie Burgenbauch has a big, Bette Midler sense of comedic timing as Mrs. Antrobus. As Sabina, Kelcie Hamilton is (as per her playbill description) fabulous, equal parts family maid and beauty queen temptress, as well as the play’s full-time pessimist, a Michelle Pfeiffer in the making.
Sarah Harvey and Madison Hodges alternate in the role of Gladys, arcing her from the rebellious, somewhat spoiled child early on to one who’s had to grow up too fast by Act III. As her surviving brother, Henry (whose background likeness to the biblical Cain is subtle, but tangible), Joe Reeves brings a touch of James Dean, especially during his third act monologue.
Supporting them are wonderful players: Ben Coney, who covers well his “too many roles to count,” Rodrigo Garcia, colorful as Moses/the Fortune Teller, Lauren Bukenberger tounge-in-cheekily cast as Mrs. Fitz/Stage Manager, Presley Mekvold as a Muse/Siren, Alonso Escobar as Homer and Daniela Delgado as the Doctor/Siren.
Set by Chantel Hodges and Susan Jamieson, lights and sound by Jordan Tani, special costuming by Dr. Susan Robinson, and stage managing by Lauren Bukenberger, with crew support from Emily Janoff, all add to the overall experience.
Bottom line: DON’T check your brain at the door. Be ready to think, and laugh, and celebrate the students’ hard work, a play that gets by on way more than the skin of its teeth.
“The Skin of Our Teeth” continues Friday and Saturday, Jan. 8-9, at 7 p.m. nightly in the High School’s Multi-Purpose Room. Tix: $10 adults; $5 students and kids.