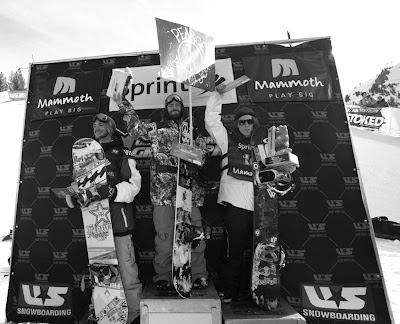 Sporting a “Pearce Be With You,”sign on behalf of fallen friend Kevin Pearce, who was injured in a halfpipe accident last week in Park City, Danny Davis took the top spot on the podium at Mammoth’s Grand Prix event yesterday. the second of five Olympic qualifying events. The third event takes place again in Mammoth this Saturday before the final stops in Park City. Davis and Pearce are both identified as part of a close-knit group of riders which has dubbed itself the FRIENDS Crew. On the women’s side, Kelly Clark won her second straight Grand Prix event, assuring her a spot on the U.S. Snowboard Team.