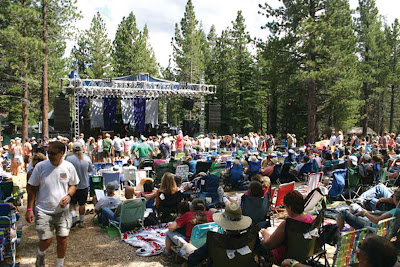 Gephart to run for Mono Judge

Longtime local attorney Randy Gephart announced Monday he will run for the Mono County Superior Court seat that will soon open in the wake of the retirement of Judge Ed Forstenzer, who recently announced he is stepping down from the bench after nearly 22 years of service.
Via a press statement, Gephart, who is well known in County legal circles, said: “I am announcing today that I am a candidate for Superior Court Judge, Mono County, Calif. I have been an attorney for more than 30 years, 20 of which have been in Mono County. I have vast experience in both criminal and civil matters. As a Mono County Public Defender for the past 13 years, I have handled a myriad of criminal matters, from infractions to major felonies; however, I have also handled many cases in my private practice, in both the criminal and civil arenas.
I believe I have as much, if not more, combined civil and criminal experience than any other candidate or potential candidate for this position.”
Forstenzer, meanwhile, in a press release of his own expressed his “deep appreciation to the citizens of Mono County for the trust and confidence that they have placed in him for the past 22 years.” He plans to retire sometime in April.

Successfully celebrating its 15th year, Mammoth Festival of Beers and Bluesapalooza organizers this week announced plans for the 2010 edition, which Harvest Moon Presents’ Jim Vanko promises will be “an energetic lineup of blues talent and talented microbrewers from around the country.” The festival has been in a growth mode, experiencing record-setting attendence, with last year’s event sold out and ticket-seekers lining the streets with “need tickets” signs as if they were going to Woodstock.
This year’s fest takes place Friday, Aug. 6, through Sunday, Aug. 8, once again outdoors among the pines at Sam’s Wood Site, located on Minaret Road between Main St. and Meridian Blvd.
“This year’s headlining acts and featured performers will be announced in the coming weeks, but be assured that our talent lineup will be amazing,” says Sean Turner of Mammoth Brewing Company, the event’s sponsor. “As a teaser, we are excited to announce that headlining the Sunday Morning Hangover Party will be none other than the legendary Dave Mason, and the rest of the weekend’s performers will be just as incredible!”
What goes better with Blues than a good microbrew? Not much, and the Mammoth Festival of Beers Grand Tasting has a rich history of featuring some of the country’s best such. Naturally, it begins locally with event sponsor Mammoth Brewing Company, but Turner’s lineup of visiting craftsman is second to none. Along with beer and blues, plenty of tasty blues-friendly food will be served in the Blues Food Court to keep even the heartiest of appetites rockin’ on.
It all kicks off with the Friday Night Blues Cookout and Concert (5-9 p.m.), featuring a variety of food vendors serving all their specialties. The concert begins at 6 p.m. and headliners will be announced soon. On Saturday, it’s the main event, the Mammoth Festival of Beers Grand Tasting with unlimited beer tasting, and Bluesapalooza (11:45 a.m.-9 p.m.) with artists performing all afternoon and well into the evening. Gates open at 11:30 a.m.
The Sunday Morning Hangover Party (9 a.m.-2 p.m.) is also back, this year featuring legendary singer-songwriter Dave Mason with special guests The Delgado Brothers.
Tickets available online at www.vallitix.com or www.MammothBluesBrewsFest.com; by phone at 888.825.5484; and locally at the Mammoth Brewing Company Tasting Room, 94 Berner Street in Mammoth Lakes. As an added benefit, tickets purchased at Mammoth Brewing Company are not subject to online service charges. Updates and additional information: call 888.99.BREWS (888.992.7397), or visit www.MammothBluesBrewsFest.com.

According to a report filed on Wednesday by Reuters, Standard & Poor’s (S&P) credit rating service took California’s main debt rating down a notch, in part due to concerns that the state could be “almost out of cash” by March.
S&P dropped the rating on California’s $64 billion general obligation debt from A” to “A-,” and also slashed the rating on the state’s $9.4 billion in lease-revenue bonds three notches, from “A-” to “BBB-.”
The rating reduction wasn’t entirely unexpected, given that the state’s forecast $20 billion budget gap next fiscal year, which the S&P evaluation said “leaves it in a precarious situation, requiring tax increases or spending cuts, either of which may slow economic recovery.”
As if all that bad news weren’t enough, S&P also indicated another rating cut may reportedly be in the offing. “If economic or revenue trends substantially falter, we could lower the state rating during the next six to 12 months,” S&P said.
Even with the reduction, however, California’s rating, which already possessed the lowest debt rating of any U.S. state, is still arguably four notches above “junk” status, the level at which many investors may decide not to purchase debt. Other credit rating firms, such as Fitch and Moody’s, followed with similar reductions.
And the Golden State, isn’t alone. So far, at least 39 state governments have been struggling with budget shortfalls, according to the nonpartisan Center on Budget and Policy Priorities.
S&P, which operates as financial services, research and analysis company, is a division of the McGraw-Hill publishing company, and recognized as a “national statistical ratings organization” by the Securities and Exchange Commission.

“Love and Madness” tix on sale

Advance-purchase tickets are now on sale for Sierra Classic Theatre’s Valentine’s Weekend production of “Love and Madness” at the Snowcreek Athletic Club Bistro.
From Shakespeare to Chekhov and Broadway to Barry White, SCT performers will get you in the mood for Valentine’s Day with scenes from classic plays and timeless songs about love … and its aftermath.
Ticket includes performance and music, plus a welcome glass of champagne and a gourmet buffet dinner presented by the Bistro at Snowcreek.
Lovers of theatre and love itself can pick from two shows: Friday, Feb. 12, and Saturday, Feb. 13, at 7 p.m. nightly. Dinner and show run time is approximately 3 hours, with the buffet served at intermission.
Tickets: $55/person, $100/couple, available at Snowcreek Athletic Club in Mammoth. Seating is limited and will likely sell out; SCT recommends purchasing tickets early!

According to a Jan. 4 report from Reuters, banking giant Credit Suisse (owners of the East Village also known as the parking lot across form the Village, property near Canyon Lodge, and the undeveloped land near Sierra Star Golf Course) are currently involved in a $24 billion lawsuit with four bankrupt resort properties. The property owners claim the bank set up “predatory loans to the resorts investors as part of a scheme to take over the properties.”
MMSA Development (separate from ski area operations) gave property back to Credit Suisse in a friendly foreclosure which was consummated last year.
When asked why MMSA would not join in the above-referenced class-action suit, CEO Rusty Gregory said, “We’re sophisticated investors. We’re not blaming them [for our losses].”
Gregory said it’s just plain silly for any entity to blame Credit Suisse for lending them money.

Joining its sister properties HYDE LOUNGE HOLLYWOOD (Sunset) and HYDE LOUNGE at STAPLES CENTER, this newest addition to the SBE Collection opened Friday night in the Village.
The MMSA press release says it will put the apres in ski.
Does this mean they’re serving Pabst on tap? Hmm.
More press release: HYDE LOUNGE MAMMOTH promises to start AND end your day with a touch of modern American gastropub bites with some Asian and Italian influences, a selection of the most seductive cocktails from LA’s finest clubs, a dance off with your friends or the next game of pool.
Hyde Lounge Mammoth will be open seven days a week from 11 a.m. until close. To make a reservation, email hydemammothtables@sbe.com.