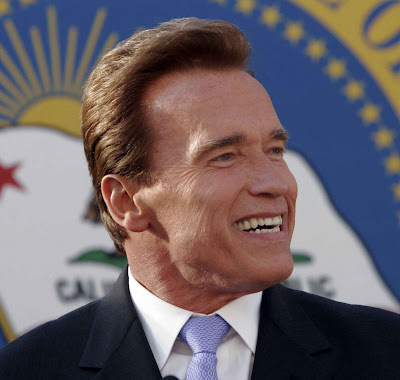 Governor Arnold Schwarzenegger’s warm, jovial manner somehow does little to warm up Mono County’s Board of Supervisors. His new proposed budget, and the legislature’s latest round of possible cash grabs, have left them a little cold. (Photo: Publicity Still)

Governor Arnold Schwarzenegger formerly proposed his state budget on Friday, Jan. 15, but with a light agenda during its regular meeting on Tuesday, Mono County’s Board of Supervisors took advantage of a chance to survey the “state of the state,” or lack thereof, examining some of the budget’s parts that are already available, and steeling themselves against what could be a fiscal year filled with financial fallout.
While it’s too early to tell what may or may not happen to hot button targets from last year’s budget debacle, (remember what almost happened to Bodie and Mono Lake State Parks?), if the federal government doesn’t live up to the governor’s expectations, major cuts may be in offing for numerous social and mental health services, many of which could have significant repercussions here in Mono County. And other radical moves may be in store to pull in revenue. Insurance policies, for instance, may be targeted for new tax hikes to fund emergency/disaster services, which are legally required.
The $82.9 billion proposed budget cuts spending by $8.5 billion, but that reduction is predicated on the federal government handing over almost $7 billion that Schwarzenegger thinks California is owed for healthcare, education and illegal immigration, including undocumented aliens housed in its jails. Sacramento plans to submit a $6.9 billion request for a “bailout” (the state legislature’s Democratic leadership prefers the term “investment”) to the fed.
The governor has recently used public appearances, such as the State of the State address, and media opportunities such as a large segment on “Meet the Press,” to voice his discontent at what he perceives are unfunded federal mandates, which should, in his opinion, be reimbursable. Not taking any chances at this point, however, Schwarzenegger has already called for an emergency budget meeting to address what could potentially amount to an estimated $19.9 billion shortfall.
He has also used his visibility to slam the Healthcare legislation currently being worked on behind closed doors in Washington, D.C. Schwarzenegger had previously expressed tacit support for healthcare reform, but has since changed his position. Calling it “healthcare to nowhere” in his recent State of the State address, the governor now calls for California’s congressional delegation to either “vote against the bill that is a disaster for California,” or “get in there and fight for the same sweetheart deal Senator [Ben] Nelson of Nebraska got for the Cornhusker State. He got the corn; we got the husk.”
Schwarzenegger has blasted the deal given to Sen. Nelson (D-Neb.) in which any expansion of Medicaid in the state of Nebraska would be paid for completely with federal funds. Other states would have to use their state budgets to meet the required expansion, as well as cover Nebraska’s part of the federal funding.
Republicans from Capitol Hill and to local governments have railed against the deal. Calling it a “cornhusker kickback,” they’ve been outspoken in assertions that the Democratic leadership basically bought the senator’s vote, one considered essential to secure a filibuster-busting 60-vote majority. (Sen. Nelson has since said he wants all 50 states covered or given the ability to opt out of their part of the expansion, though whether that ends up in a final version of any healthcare bill remains to be seen.)
An item of some concern among Board members is the legislature’s proposed change in the gas tax, which will at least alter, if not completely re-route, Prop 42 funding. Streets and roads covered by California’s Statewide Transportation Improvement Program (STIP) may be protected, but general transit funding could take a substantial hit. The upside: motorists will pay a nickel less per gallon; the downside: the change means roughly $1 billion from gas tax money originally meant for local governments will instead go to the state’s general fund.
Federal transportation funding to augment transit may be cover the difference, but it still remains to be seen whether the fed will even ante up any additional dollars for the states.
Also to be reckoned is whether the legislature can actually change the tax without the public’s approval. Prop 42 was enacted by the voters and may not be able to be changed or otherwise supplanted without a formal ballot measure. Its language is being analyzed to see whether “emergency conditions” amendments open the door for Sacramento to tinker with Prop 42.
Supervisor Hap Hazard and other members of the Regional Council of Rural Counties planned to review the sections of the governor’s submitted budget proposal at a meeting in Sacramento this week.