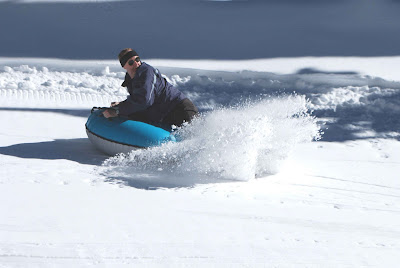 The constant question you hear in Mammoth is “What do we do with the kids in the evenings?” Add sledding to the list. Visitors and perhaps a few locals have probably seen the site for the Sledz recreation park on the way to or from Mammoth Mountain. It’s a safe, fully-maintained alternative to skiing and boarding, and as a dedicated park, has none of the pitfalls you can run into by just picking any old snow-covered spot in town or off U.S. 395.
James Dunn, 29, owner of Sledz (located on Hwy 203 on the way to the Main Lodge), inherited the business from his father Jim, who passed away last year.
Sledz has been running tubes since 1995. Originally conceived and hand-built as a bobsled track, Jim Dunn soon discovered that the bobsled customer constituted, well, a niche market. “Tubes are family friendly,” said James.
Although I was the only sledder there on Thursday morning who was neither a toddler nor a parent, I have to tell you the slope was fast and FUN.
Sledz operates with a 500-foot long tow rope that gently pulls sledders up to the top of the hill, reducing the exhaustion factor normally inherent in the activity. The tow rope provides a relaxing ride, a contrasting segue to the 20-second adrenaline rush down the slope.
But during the day, the track isn’t fast enough to deter 5-year-olds from sledding solo. Thomas Temperley, 5, quickly ditched his dad after their first duo run, braving the hill alone for the rest of the morning.
Thomas’ mother, Jen Temperley, said her family first experienced Sledz two years ago, and returned again this year for the fun they remembered having. Jen said Sledz provides a nice break from their other snow activities. Unlike snowboarding, she said, you can close your eyes going down the slope. “And what’s better than being pulled back up the hill?”
The business is operated in partnership with the Inyo National Forest, which leases Dunn the property.

Since all of the “good” sledding hills are privately held or on Forest Service or BLM land, Sledz provides a safe public place located away from road traffic and snowmobiles.
The track will be fully lit at night. Evenings, James said, tend to produce excellent conditions because the track is colder, and thus, faster, possibly attracting a more thrill-seeking crowd.
The cost is $25 per person for one hour of sledding. Sledz provides the tubes as well as the rope tow. It is open to anyone over 36” tall. Usually, said James, smaller children ride with a parent.
Dunn has extended his hours of operation on holidays and weekends to 7 p.m. Sledz is closed on Wednesdays, though is available for rental for private parties. Regular hours on non-weekends/holidays are 10 a.m.-5 p.m.