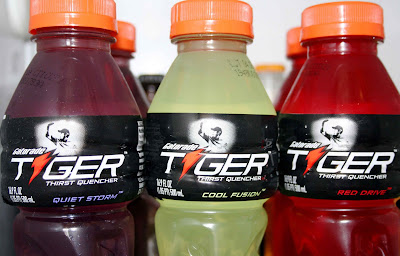 “I am not without faults and I am far short of perfect,” claimed Tiger Woods in a Dec. 2, 2009, apology letter from his website.
In the past few weeks the media and world have been enthralled with the fallout of the Tiger Woods infidelity case. We watch, eyes glazed over as Woods not only loses his mystique and his marriage but also his millions of dollars worth of sponsorships. To the media and the entire sports world, it’s been the perfect storm. But will he ever recover?
Well, history says he will.
Woods isn’t the first celebrity athlete to fly too close to the sun nor will he be the last. Not too long ago, in the summer of 2003, Los Angeles Laker Guard Kobe Bryant was the poster boy of the NBA. His endorsements were profitable and numerous. You couldn’t flip through the television channels without seeing Kobe eating McDonald’s, drinking Sprite or sporting his own signature shoes.
Then reality set in. He was a certified horn dog. A sexual assault case (that he was eventually found innocent of, though he admitted to the sexual encounter) ruined his career and his endorsement deals.
Whether he did it or not simply didn’t matter. The damage was done. But then, after a few years, something bizarre happened. He was forgiven by his wife (after he purchased her a diamond the size of a Ferrari), became the NBA’s Most Valuable Player in 2008 and 2009, changed his jersey number from 8 to 24, and most interesting, the fans seemingly forgave him. Soon Bryant was back on TV sipping Sprite, lacing up Nikes, and eating McDoubles.
In only a few short years Bryant revived his career, fixed his marriage and regained if not expanded his endorsement contracts. So what happened? At first glance his situation seemed irreversible.
The solution – Kobe did what we always wanted him to do, he played basketball.
He earned MVP titles, scored 81 against the Toronto Rapters and 61 in Madison Square Garden, but more important, he won a NBA championship. Kobe returned to the old Kobe, the Kobe that hogged the ball and made crunch time plays.
Kobe isn’t the first celebrity athlete to make a miraculous comeback. Look at Baltimore Ravens linebacker Ray Lewis. He may be the epitome of the American population’s ability to overlook an athlete’s past transgressions.
In 2000, Lewis was involved in an altercation that resulted in the stabbing deaths of two people. Though he was closely linked to the murders, he eventually pled guilty to obstruction of justice charges.
A year later, Lewis won a Super Bowl and was crowned Super Bowl MVP (however this did not rekindle his sponsorships). Then 4 years later, he rose to be one of the NFL’s most marketable players with endorsements from Reebok, Under Armour, and was featured on the cover of Madden Football 2005. What the hell?! He allegedly stabbed two people!
In Tiger’s situation the lesson is amazingly simple and obviously less heavy as a stabbing case. If we’ve learned anything from Bryant and Lewis, as long as you’re an amazing athlete you will always be forgiven. But that still leaves one nagging question: Why do companies even drop their image-battered celebrity athletes in the first place, knowing damn well they’re just going to scoop them up again down the road? Sure, there’s the straightforward question of image. The association of a company with an adulterer could be damaging. But Tiger’s situation is a case of image versus reality. Even a faceless corporation has to realize that humans will act, well, human. It wouldn’t be the first time a company stuck it out with a celebrity facing a terrible image problem. The only athlete Nike has dropped in recent history because of a scandal was now-backup Eagle QB Michael Vick.
History’s lessons have taught us two important things. The worst thing Tiger can do right now is to stop playing golf and the worst thing we can do right now is stop buying his products. Sound ridiculous? Do you now hate the taste of Tiger’s Focus Gatorade just because he cheated on his wife? Do you refuse to stop using AT&T because Tiger was sexting with another woman? Are you honestly going to stop wearing Nike sneakers?
As much as we probably hate to admit it, we still love our celebrity athletes even if they do stab and cheat, and thus we still like the products they endorse. To prove this point, let’s take a look at some still-loved celebrity athlete endorsers, regardless of past transgressions.
Magic Johnson: In 1991, Johnson announced that he contracted the HIV virus. He initially stated that he didn’t know how he contracted the virus but later admitted that he probably contracted the disease while having multiple partners throughout his career.
Sports Comeback:
Played in the 1992 All Star game and was named MVP.
Joined the first Olympic Dream Team in 1992, didn’t play much because of knee problems but still received standing ovations from international crowds.
Endorsement Comeback:
Purchased 5% of the Lakers.
Owns multiple Starbucks and TGI Fridays franchises.
Started his own division of AMC theatres: Magic Johnson Theatres.
Introduced his own barbecue sauce company called Magic Johnson’s Showtime Barbecue Sauce (available locally at Vons). With the slogan, “Tastes like a Slam Dunk.”

Michael Jordan: In 1989, Jordan admitted to having some really expensive sex with secret GF Karla Knafel, paying her $5 million to keep quiet about the affair just weeks after his marriage to Juanita Vanoy. Then in 1993, Jordan was spotted at an Atlantic City casino the night before a playoff game against the New York Knicks. The same year, Jordan admitted having to cover $57,000 in gambling losses. Later that year, Jordan retires from the NBA and makes an awful attempt at playing baseball for the Chicago White Sox.
Sports Comeback:
Comes out of retirement in 1995 and goes on to win three NBA Championships in a row starting in the 95-96 season.
In 1996 through 1998, Jordan receives Finals MVP honors.
Was named NBA MVP 1996 and 1998.
Joined the NBA All-Star team 1996-1998, 2002-2003.
Endorsement Comeback:
In 1991, two years after scandal with Knafel, Jordan stars in Gatorade “Like Mike” commercials.
In 1993, a Super Bowl commercial starring Jordan and Looney Tune characters inspires film, Space Jam. In which, Larry Bird wows audiences with his only line in the movie, “Where’d he go?!”
1994, Jordan stars in Electronic Arts video game, “Chaos in the Windy City” for Super Nintendo. Where Jordan side scrolls through different levels all the while throwing flaming “attack” basketballs. Genius.
In 1998, Jordan comes out with Jordan Cologne (available at K-Mart in Bishop). Smells like a winner.
In 2006, Stars in Hanes commercials playing grab ass with Kevin Bacon.
Consistently sold Air Jordan’s throughout all controversies.

Alex Rodriguez: In 2003, A-Rod admitted to using a “banned substances,” called Balli from the Dominican Republic. In 2008, A-Rod’s wife Cynthia files for divorce, citing A-Rod’s continual “extramarital affairs,” as former NYC Madam Kristen Davis fingers A-Rod as a top client. A-Rod hires Shaq’s divorce attorney.
Sports Comeback:
A-Rod makes All-Star team in 2000-2008.
In 2007, is named American League’s Most Valuable Player.
Wins World Series in 2009 with New York Yankees.
Endorsement Comeback:
Has managed to keep his contract with Nike despite controversy.
Landed a Pepsi commercial in 2006 and in 2008, starred in a Guitar Hero “World Tour” commercial alongside Kobe Bryant, Michael Phelps, and Tony Hawk. Who, Hawk aside, have all made significant comebacks amid personal controversies.

This list could go on and we’ve left out obvious celebrity athletes such as Shaq, Phelps, Vick, Beckham, PacMan Jones, and the plethora of non-athlete spokespersons, such as Madonna, Paris Hilton and Sean Puffy/Puff Daddy/P-Diddy Combs
It’s clear that we have an obsession with celebrity that rivals even our interest for books and movies. The difference is that in a celebrity’s case the story is real, and there is no such thing as a perfect ending, in fact the story never ends. As long as Tiger keeps swinging clubs, his publicized struggles will more than likely blow over. But what won’t blow over is my love for that sweet and delicious low calorie taste of Focus Gatorade.