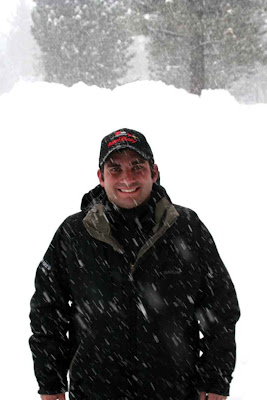 Tamarack’s DeCell is getting his groom on … (Photo: Lunch)

Making a neat groom at Tamarack Cross Country Ski Area has taken Jeremy DeCell from Vermont to Mammoth and will soon lead him to Vancouver, B.C., for the 2010 Winter Olympics. DeCell was recently selected to groom trails for all the Nordic cross-country ski competitions.
“I’m into Nordic cross-country grooming. My dad taught me everything he knew about grooming and basically got me into it,” DeCell recalled.
He moved here from Vermont just to work at Mammoth Mountain for the 2007-2008 season and planned to move back home afterward. But, as with many who come here for a taste of western snow, he can’t bring himself to leave.
When DeCell, who’s been making and maintaining trails as a seasonal groomer at Tamarack since October 2007, decided to explore some other outlets for his grooming skills … one of those ended up being taking a shot as a groomer for the world’s biggest winter sports event.
“I went to John Walline, snowcat maintenance supervisor at Mammoth Mountain Ski Area, and asked him if he could tell me the procedure for grooming at the Olympics,” DeCell related. “He said to get in touch with Pisten Bully, which supplies all of MMSA’s grooming equipment. I talked to them and they referred me to a contact at Whistler Olympic Park.”
DeCell said from the initial contact, it was six months and a week-long job interview before he got an e-mail saying, “Congratulations, you’ve been accepted to the 2010 Winter Olympic Nordic Grooming Team!”
Worth the wait? “Oh, yes, definitely. It was incredible!”
He’ll fly to Reno on Feb. 3 and as soon as he lands in Canada, he’ll meet the rest of the crew and get to work. “There’s mostly 16-hour shifts and about six days off during the month I’m up there.”
Does he feel honored? “Are you kidding? I called every single person I could think of and told them!” The whole Tamarack crew has been behind him all the way as well. “It’s been really special to have all their support, as well as everybody up at Mammoth Mountain. They’ve all been great.” He’s also thankful to his boss, Director Ueli Luthi, for allowing him the time away to participate in the Olympics.
He’ll try to do some sightseeing, but said the focus is his work. “I’m there for the grooming. That’s the main reason.”
Is he feeling any pressure? After all, he’s going to be making trails for the best cross-country skiers in the world. “I’m nervous, but I’m excited about it. If I take my time and do my best, I know I’ll make a great course for the athletes,” he said confidently. “When I sat down and thought about it, I realized that being picked to groom for the Olympics means I’m like going to the big leagues.”
He plans to be back at Tamarack as soon as the torch goes out in Vancouver, but when he returns will bring Olympic-level expertise to his already world-class work. “I’m not even competing, but I feel Iike I’ve already won a gold medal!”

Amid an unprecedented season plagued with a slew of bad luck for Olympic Snowboard team hopefuls, Danny Davis is yet another Olympic hopeful who has seen his dreams dashed … and he has no one to blame but himself.
Davis was admitted to a Utah Hospital at 3:30 am last Sunday after injuring his back in an accident involving an ATV, according to an Associated Press report.
The 21-year old snowboarder was celebrating a win from Saturday’s Dew Tour event at Snowbasin with friends at a housing development in Park City. He was later found unconscious by friends after he crashed his four-wheeler into a closed parking lot gate.
According to an update on Davis’s Facebook page, “Doctors remain positive Danny will make a full recovery. He will undergo surgery today in Utah to repair a L3 spine fracture.”
Though doctors expect a full recovery he is more than likely done competing for the remaining 2010 season.
Davis recently won a Grand Prix halfpipe event two weeks ago here in Mammoth, strongly enhancing his chances for an Olympic roster spot. He was dedicating the 2010 season to close friend and colleague Kevin Pearce, who suffered a serious injury during an accident at Park City about a week before Davis’s win in Mammoth.
“I had Kev on my mind and right before every run I was making sure I had him in spirit,” Davis said that day. “I know we’re sending vibes back to each other, and it was good.”
Kevin Pearce is still in serious condition at a Salt Lake City Hospital.
With Pearce and Davis out for the season, the Olympic team is looking to a few other hopefuls who may still qualify in events to be held in Park City this weekend. Defending gold medalist Shaun White has already clinched his spot. Right behind White is Louie Vito, who has two second place finishes. Meanwhile, Zach Black and Jarret Thomas each have a pair of top-5 finishes in the Grand Prix. -Wolf