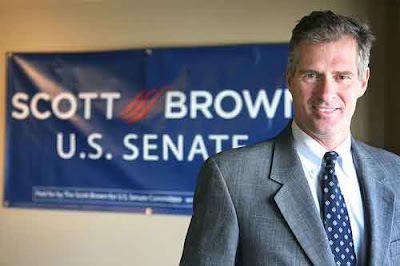 Talk about “what can Brown do for you?” … Casselman managed to blister the left and scold President Barack Obama without mentioning Senator-elect Scott Brown’s name once in the entire column. And, unlike Brown’s opponent, Martha Coakley, he spelled Massachusetts correctly! (Photo: Scott Brown for Congress)

Not all Democrats were losers Tuesday night, but the ones who have enabled President Obama to wallow in his self-delusions, and who continue to press for the very policies which provoked the voters of Massachusetts (and voters across the nation) to turn away from the Democratic legislative agenda, did lose. In fact, to use the current jargon, they lost big.
Who could have imagined that Democrats could lose a senate seat in Massachusetts, one of, if not the, most liberal state in the nation? And not only lose, but lose decisively.
The usual suspects, including Daily Kos, MoveOn.org, Nancy Pelosi, liberal propaganda columnists, White House advisors, et al, are urging President Obama to ignore the voters and press on with their radical agenda. And so far, the White House idea of a “brave front” has been to echo them. Nothing could make Republican and conservative partisans happier. Not only will any attempt by the Nancy Pelosi/Harry Reid majority to ram through their legislative agenda, including health care, cap-and-trade and other radical legislation, fail, it will cost the Democrats even more seats in both the senate and house than they are slated to lose now come November.
It is the moment for the so-called moderates (I prefer the term “centrists” or “left-centrists”) to step up to the plate and tell the old Democratic leadership they won’t play their brand of losing political baseball.
We will now see for the first time whether Barack Obama is a politically inexperienced ideologue or a young political executive who wants to govern.
If he is determined to continue to press for an unprecedented redistribution of American wealth in the European social democratic model, and to diminish U.S. responsibility in a violent world, he is already a lame duck, and his party will be battered in November.
Mr. Obama took office exactly one year ago today thinking he was Franklin Roosevelt. So far, he has only been Jimmy Carter. His loss of national support has been unprecedented in its velocity.
The time may have come for the leaders of the Republican Party to begin to offer an alternative universe of ideas and programs. That assumes, of course, that the Democrats listen to what the voters said in Massachusetts, and are saying in virtually every poll taken in the U.S. If the Democratic leadership, however, tries to insist on its now-rejected agenda, the Republicans will simply continue to offer the effective “No!” they have been emphatically articulating.
But what’s best for the country? With economic disaster looming just over the horizon, with terrorists encouraged by American withdrawal and official self-flagellation, and with stalemate over genuine necessary reform, the nation is not necessarily well-served by games of abstract political chess and legislative paralysis.
The clocks of the world are ticking relentlessly. There are not only geological faults that produce tragic natural earthquakes. There are also ideological and political human faults (such as hubris and abstract ideologies) that produce and continue human misery.
“The fault, dear Brutus, is not in our stars, but in ourselves, that we are underlings.” Five hundred years later, the Bard of Avon tells us one more time what we don’t think we want to know.
Barry Casselman is a syndicated columnist with the Preludium News Service.