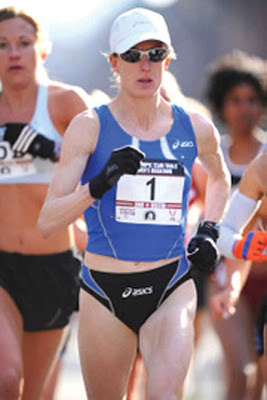 With all the recent attention swirling around Mammoth’s comeback player of the year, Meb Keflezhighi, who won the New York Marathon in November after battling injuries for the previous year, it’s been rather easy to overlook the fact that his female counterpart, Deena Kastor, has been absent from the winners circle for the past 10 months.
Perhaps that “lull” as it were gave the 2004 Olympic Marathon bronze medalist a chance to get herself fully up to speed, but in any case, as of last Sunday, Jan. 17, the break is apparently over. Kastor, 36, launched into what is shaping up to be a busy 2010 by winning the Women’s leg of the P.F. Chang’s Rock ‘n Roll Arizona Half-Marathon.
Not only did the American record holder blast her way to the top of the the winner’s podium, she also set a new Arizona state record with a time of 1:09:43, bringing what has been the longest dry spell of her stellar career to a spectacular conclusion.
After the race, Kastor told Track & Field News the finish “solidifies that my training has been going well.” On her way to victory, Kastor trampled all over a 15-year-old Arizona record of 1:13:39 previously held by Marie Boyd. Kastor noted her performance boosted her enthusiasm about her opportunities during the “next phase” of her comback, including a run at the London Marathon in April. “Today was the first time in a couple of years I felt like my old self running again,” she told T&F News.
Many locals will recall their stunned reaction when Kastor injured her foot in the 2008 Beijing Olympics and was forced to withdraw from the Marathon early on in the race. It would take most of 2009 for her to recover, but long before the year was out, Kastor expressed confidence in how she was feeling and running.
According to T&F News, Kastor ran “an aggressive first mile” in 4:54 and was on American record pace through four miles before a stubborn headwind slowed her in the second half. Reigning American marathon champion Ilsa Paulson was clearly disappointed with her second-place finish time of 1:17:04, nearly four minutes off her 1:13:20 personal best.
“I felt like I could run a 5:45 pace forever, but when I had to try to run a 5:20 pace to stick with Deena for the first two miles it just fried my legs,” Paulson told T&F News.
Running in the Men’s Half-Marathon, Mammoth’s Ryan Hall finished a surprising second to Canadian Simon Bairu, who reportedly shadowed Hall during most of the race and then hit the accelerator in mile 10, finishing 1:21 ahead of Hall.
Hall downplayed the second-place finish, saying the plan for Arizona all along was as a practice session. “Boston is the big picture, so this was a test to see where I am and I still have New Orleans to go before Boston,” he explained to T&F News.
Hall, also an American record holder, is scheduled to run next in the inaugural Rock ‘n Roll Mardi Gras Half-Marathon on Feb. 28 as a “final tune up” before taking his place at the starting line for the April 18 running of Boston Marathon, in which he came in third last year.
In an interview with Runner’s World, Kastor’s coach, Terrence Mahon, said he’s “happy” with her showing in Arizona. “I think she’s definitely on track for a good year,” Mahon said, adding he thinks Kastor is “looking and training now like she did when she won Chicago in 2005 … and set records [while] winning the 2006 London Marathon. The pop’s in her legs and she no longer feels like every workout is injury-assessment day.”
Kastor, meanwhile, finds herself leading a group of eight women all jockeying for position in the upcoming Olympic trials.