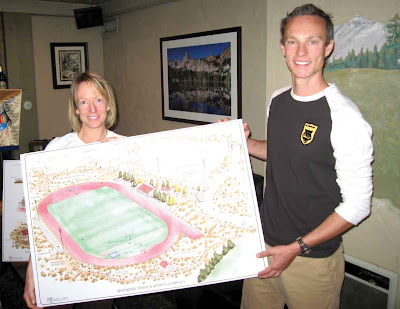 When Mammoth resident and Olympian Deena Kastor and her husband, High Sierra Striders co-founder Andrew, hit the ground running, they mean it, both physically and metaphorically. The two are part of the team behind the Whitmore Track Project, a high-altitude outdoor running and training facility destined for Benton Crossing Road off of U.S. 395.
In a little more than a year’s time, they’ve already secured half of the project’s $4 million price tag, enough to break ground this April and install the track and infield (aka Phase 1) this year. Deena, for her part, is chomping at the bit to get shoes on the track.
“What we’ve heard from many athletes and coaches is that Mammoth is gorgeous, they love the high-altitude aspect, but there’s no track,” Kastor told attendees at Mammoth Lakes Chamber of Commerce’s monthly luncheon. A track, she explained, is a basic tool to measure runners’ progress. “As excited as I am about getting the rubber surface poured, I want to get programs off and running!” (Pun intended, no doubt.)
The Kastors are itching to get the project, which bears the slogan, “Elevate your fitness … stay on track,” used by runners and other athletic programs. Wasting no time, she’s already had talks with Deanna Campbell at Cerro Coso College to host “21 Day” running camps, 21 being the “magic number” for acclimation to the facility’s elevation of 7,061 feet.
The complex, designed by architect Brett Long, actually has its roots in a vision or concept that dates back to the 1980s, and the Kastors said that once the Los Angeles Department of Water and Power designated it an ”active recreation site,” the project’s way forward was cleared. Whitmore will, when fully completed, boast not only the state-of-the-art track, but also an exercise path with fitness stations, a healthy-food concession stand/gym locker/storage pavillion, lots of free parking AND (drum roll, please) a DOG PARK, which was recently added to the site plan.
And the site, the design of which fits the “Eastern Sierra motif,” will be nearly as green as grass. Enviro-conscious rock-based stadium seating will ring the track, which will be composed in part of recycled tires, and a synthetic infield that requires no watering.
Deena said the facility will be open and available to the public, and will be heavily promoted to schools and other organizations. “It can be used for everything from jumping and throwing training to staging for the Fall Century Ride,” Kastor pointed out. The infield will be designed to allow for soccer and football, not to mention javelin.
Winter usage, naturally, is an issue. According to Deena, the surface is based on a similar all-weather version in Lake Tahoe. There will, however, be a handful of days that the track will be closed.
High Sierra Striders co-founder Elaine Smith said that much of the funding for Phase 1 came from local donors, including community members and businesses. In addition to money, donations of in-kind services have come from Mammoth Mountain Ski Area, and local businessman Steve Klassen, a former pole vaulter, has donated pole vault gear to the facility.
After completing the Whitmore Track facility, next on the Kastors’ list of things to do is an indoor training center, perhaps located near Cerro Coso college, that will sport tennis, basketball and climbing, among other goodies. At roughly $10 million, though, it’s a “much longer term” endeavor. “But we’re young; we’ve got time,” Kastor quipped.
For more information on the project, including how to donate, visit www.mammothtrackproject.org.