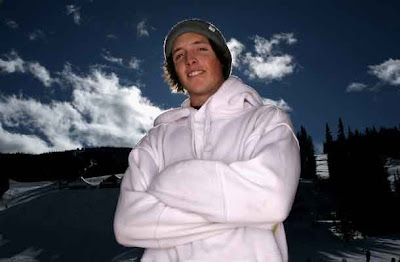 The red, white and blue flannels were handed out last weekend in Park City, Utah as the 2010 Olympic Snowboard team was announced following the final qualifying event of the Grand Prix.
Shaun White, landed the first-ever-in-competition double McTwist 1260 (essentially two backflips while rotating 1260 degrees) showing the fans that the “Flying Tomato” (though he doesn’t like to be called that anymore) is more than ready for Vancouver.
Spin-doctor Scotty Lago threw down a score of 48.00 earning him a spot on the Olympic roster and proving that “Shaun of the Red” may not be alone on the Olympic podium.
Apparently little big man Louie Vito, couldn’t get it together that night, but it really didn’t matter since he’s already got his bags packed for Vancouver anyway after two previous 2nd place finishes.
But in a surprising Cinderella story, Mammoth local Greg Bretz spun his way past Zach Black at the Grand Prix to earn his first Olympic flannel. Danny Davis had enough points for the fourth roster spot, but decided to ride his ATV into a closed parking gate last week instead of going to the Olympics. Meanwhile, Bretz finished in a three-way tie for 5th with Luke Mitrani and JJ Thomas but beat out both via a tiebreaker formula.
Bretz had 3rd and 4th place finishes in the final two Grand Prix events.
The Women’s Roster was also stamped with untouchable Kelly Clark at the top of the heap. Gretchen Bleiler, Hannah Teter and Elena Hight were also named to the roster.

Teller to compete at X-Games

Johnny Teller may have missed out on an Olympic team berth for Skier Cross, but terrific performances recently have landed him a spot at the X Games this weekend.
Reached in Aspen this week, Teller said his Olympic bid came down to a final World Cup race in which he needed to finish in the top three.
Starting from the 59th position, Teller qualified 12th and finished 20th, his best World Cup finish ever.
Teller said that essentially the same World Cup field will be in Aspen this weekend. Qualifying is Friday and the finals are scheduled for 10 a.m. Sunday.

Mammoth Mountain Snowboard Team member, Garrett Weinert had a huge day last Saturday at Bear Mountain Resort. The 16 year-old Crowley Lakes resident placed 2nd in the Gatorade Free Flow Tour Slopestyle comp and 2nd in the Burton Am Halfpipe competition. Weinert is blasting through this season after finishing 2009 with a win at the Volcom Peanut Butter Rail Jam here in Mammoth. Weinert also placed 2nd in this year’s first stop of the Volcom PB and J’s in December.

Local Wave Rave employee, Mark Reininga placed 1st (ahead of Weinert) at the Gatorade Free Flow Tour Slopestyle comp last Saturday, which incidentally earned him an all-expense paid trip to Mt. Snow Vermont for the final tour stop. A win at Mt. Snow would guarantee the 19-year old a spot on the Dew Tour (and a shot at bigger purses) After his win, Reininga told powdermag.com “I’m so happy I won. It totally made sleeping in my car worth it.”