Peace Pedaler may end up a local after traveling world

On his 38th birthday Jamie Bianchini’s world-wide invitation to ride consisted of straddling a pair of skis rather than his usual tandem-single mountain bike or “tangle.” Bianchini was visiting his brother, Nick and sister-in-law, Kari in Mammoth while on a break from Peace Pedaling.

Bianchini started Peace Pedalers in 2002 with fellow rider Garryck Hampton. Their goal was to bike all over the world in three stages, covering about 86 countries, to do their part to create more peace in the world through cultural education, exchange, and random acts of kindness.

So why, nearly finished with a journey of this magnitude, having visited more than half of the countries he set out to, would he spend his birthday in little-old Mammoth? Family, according to Bianchini, and the fact that once this wild ride of his is over, Mammoth is one of the top places he is considering settling down.

“I miss my family a lot,” said the cyclist. “I am always dreaming of coming here [Mammoth] while I’m away.”

And away he has been. After Hampton suffered a terrible mountain bike crash while in Malaysia in 2006 and had to go home to recoup, Bianchini became the soul, full-time Peace Pedaler on the job. Luckily, by the sheer definition of what the ride is all about, Bianchini is rarely ever alone on the road for very long.

According to the Peace Pedalers’ website, www.peacepedalers.com, the idea was to take two seat tandem bikes on an around-the-world adventure through about 86 countries. “But we’re doing it a bit differently,” Bianchini writes on the site, “we ride on the front seats and leave the rear seats open to invite people we meet along the way to join the ride.” Hence the slogan, “world-wide invitation to ride.”

Bianchini carries extra bike clothing and equipment, and tries to get to know his guest rider, even just a little bit, whether the rider is on the bike for five minutes or five miles.

The Peace Pedaler brainchild was hatched, as many great ideas are, while Bianchini was in college, drinking beer.

“I’ve always had a passion to know my world,” he said. “Friends and I talked about how cool it would be to ride around on tandem bikes.”

Several years after college he went bankrupt and while doing some soul searching settled on the idea of Peace Pedalers.

“I felt it would be a good way to break the barriers that keep us apart, globally,” he said.

What was suppose to be a two to three year trip is now heading into its eighth, but according to Bianchini he has actually only been pedaling for about five of those years.

“I stopped now and then and fell in love with women,” he explained.

Along the road of Peace Pedaling, Bianchini swears he has had mostly good experiences. Besides his bikes being stolen twice, once in China and once in Africa, Bianchini can only recall one of his guest riders demanding that he buy him beer and then stealing his gloves as another bad experience.

“Sometimes I would have to kick fat people who didn’t know how to ride off the bike when we were riding up steep hills,” he said. One specific instance he remembers was a 225 pound rugby player named Joe who wasn’t a very good rider. Bianchini had him get off and hitch a ride to the top of the hill they were climbing.

Overall the experience has made Bianchini more optimistic and excited about the state of the world. His confidence and faith in the goodness of humanity has grown.

“The world is a beautiful place and not something to fear,” he said. “It’s been great to be able to look at the world with my own two eyes and not through the eyes of media and hype.”

After Hampton’s crash and his departure from full-time Peace Pedaling, Bianchini took the opportunity to change focus a bit. He started taking more videos of his travels along the way and getting more sponsors involved with the project.

Now, about to head into the third and final phase of the journey, which will start in Canada and end in San Diego, the Peace Pedaling project has really taken off. Bianchini has managed to start several charities in the countries he has traveled to, which has helped him solidify strong enough sponsorships to turn his journey into several creative projects.

Bianchini is currently working with producer Les Stroud on a television show about Peace Pedalers. All of the video footage that Bianchini has painstakingly collected now has a very real purpose.

“That’s another reason I came home,” explained the self-proclaimed vagabond who lives in a camper during his home visits when he is not staying with family. The video clip seen here is the trailer for the show. Bianchini is also writing a book about the experience and what it meant to him. 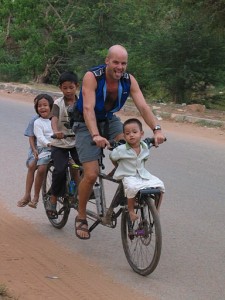 Bianchini is hoping to finish the last leg of his trip by November of this year. In total he believes he will have pedaled about 30,000 miles, but he’s not totally sure.

“I took off my speedometer after year one,” he said.

Once finished he expects to come home and settle down.

“I didn’t realize how hard it would be on my family and friends over the years,” he said. “A lot of people are getting tired, and I am too. Not tired of the ride, but tired of being a vagabond.”

Check out the Peace Pedaler website to learn more about the projects and charities Bianchini and his efforts have helped produce www.peacepedalers.com.

A bit more about the Tangle

The Black Sheep Tangle’s name was derived from the words tandem, “Tan,” and single, “gle,” and poof: you get the Tangle. These bikes were made specifically for Peace Pedalers and have the ability to expand and contract from a single mode mountain bike to a tandem. Peace Pedalers simply insert custom frame tubing and couplings into the single mode frame. According to the Peace Pedaler website, “These are the first single-tandem designs truly capable of hammering the most extreme off-road terrain the world delivers.”