For 180 dirham (about $45) I got my ski pass for two hours, a blue one piece snowsuit, ski boots, a pair of about 153 Volkls, disposable socks, and some little black gloves. “Don’t you want poles sir?” asked the young Pakistani man from behind the counter. I shook my head thinking how could I possibly need poles while skiing inside of a giant walk-in freezer. “No thank you,” I replied. With my Detroit Tigers baseball cap on and my Wayfarers I was ready to shred this little pile of ice cubes. “Aren’t you going to want a winter hat?!” screamed my mom. “No mom! Michigan skiing is way colder than the desert.”  “It’s gonna be cold in there,” she rebutted. With complete frustration I muttered, “S**t mom, no.”

I was about to ski inside the world’s biggest indoor ski resort located inside the Mall of Emirates in Dubai. But first I just had to figure out how the hell to get in there. Ahead of me was a big blue sign in Arabic and below it was a small arrow with an English translation, “To Slopes” the sign read pointing toward an escalator. “Sweet,” I thought, “no chairlifts.”

Eventually the winding escalator stopped and I walked through an automatic door and stepped on to… snow. “Holy s**t it’s cold in here,” I thought. In front of me was a huge ski slope that resembled frosted over par 5 dog leg with a curving chairlift hovering about 10 ft. above the ground.

I looked over my shoulder. Behind me was a huge set of windows so that patrons from the mall could peer in and watch the skiers. There, over in the left hand corner stood my mom. Except she wasn’t alone, surrounding her was a group of three or four short little emirate women all dressed in traditional black abayas. Turns out my mom, in usual mom fashion, told all of her co-workers in Dubai about how awesome her son was at skiing. So of course, they all came to watch through the little slit in there robes.

I could just picture her at one of the elementary schools she was working at, sipping on some tea in her office and saying something along the lines, “Oh my son is coming to visit. He’s a coach at Mammoth Mt. You know…California. He’s really good at skiing, blah blah blah blah.” F**k.

At a mighty 10 ft, soaring above the slopes I could survey almost the entire “mountain.” Below me to the left was a small sledding area with a little luge type of slide. Pakistani and Emirate children frolicked around as they played in this new found white cold stuff. To my left was a… “Hey poot da ba down!,” screamed some chick with an Eastern European accent. “What?” I shouted back. “Poot….the…bar….down!” Confusion. I’ve never heard of such a thing. Even skiing in California, home of the personal injury lawsuit I’ve never been scolded for such a request. So I reluctantly put the bar down.

To the right was the terrain park. Two little ramps about three feet tall stood in the middle of the run, surrounded by an orange gate and a sign that indicated the park was closed. The chair got to a midpoint where it slowed down and on the right was a little mid-mountain chalet where you could get hot chocolate and other stereotypical skiing delights.

I stayed seated and the lift turned left heading up for the last stretch. On my right was an 8 foot quarter-pipe spanning the entire upper wall of the “resort.” This quarter-pipe didn’t make any sense to me seeing as there was no way to get any speed to even hit the thing. Even if you could hit it with speed you would probably slam into the ceiling.

As I approached the top of the lift, I noticed a giant mural of a European mountain scene. There in the clouds of the mural were giant painted over air conditioner ducts. “Makes sense,” I thought. When I got off the lift I asked a young woman wearing a uniform why the jumps were closed, “Not good conditions,” she responded. “But don’t you control the conditions?” She looked at me blankly. “Okay.”

Standing at the top looking over I noticed the painted mountain scenes that actually spanned the entirety of the resort walls. Ahhh fresh freezer air. I heard some men talking next to me with what sounded like Swiss accents. They had their own ski clothes, tight multi-colored one pieces with faux fur trim. They even had their own ski equipment. “Who would actually bring their own stuff all the way here?”

I decided to watch them ski down first. True to all things stereotypical of the Swiss (and this is solely based on what I know via the movie Cool Runnings) they had little sayings while they went down the hill. Now I don’t speak any language other than what I know from urbandictionary.com so I had no idea what they were saying. But every time they made a turn they would yell something like, “hine….yine….hine….yine,” as they skied a miniature version of the Powder 8. Hilarious.

Skiing down the hill reminded me a lot of skiing in Michigan. Like my mom said, it was cold. But just like Michigan 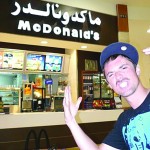 Most locals were McDubious of Wolf.

it was icy and one big turn and it’s over. I got a lot of weird looks for skiing without poles. When I hockey stopped at the bottom of the run I looked up to the window where all the little abayas giggled and sheepishly looked away.

Man, people from Dubai suck at skiing. I felt like Tom Selleck in the movie Mr. Baseball minus all the sushi and cigars. But I’am not hatin’ on em, they could definitely dust me in a falconeering contest. I lapped the mountain a few times and eventually got extremely bored. After awhile I found that it was more fun to have the Eastern European chick yell at me for not putting the bar down then it was to actually ski the hill.

That was back in the summer of 2008. My sisters and I spent two sweaty weeks there. I spent half of everyday on the beach with a cooler of Pabst Gold that I got at the only liquor store within a hundred miles and the other half trying to persuade shopkeepers to trade a dozen camels for my sister Lara. There were offers.

Let me point something out to you. If you ever find yourself in a Middle Eastern country and you want booze, forget about it. Alcohol is legal, but your chances of finding a liquor store are about as good as finding MMSA CEO, Rusty Gregory in a miniskirt.

But I have to say Dubai is actually pretty sweet. It’s on the beach, they have ketchup flavored Pringles and if you love air-conditioning and being harassed you’ll love the no sales tax and endless malls. I do have to say however, it certainly makes you appreciate how great it is to live in Mammoth (in case you were wondering the skiing here slays Dubai).

I do miss a few things about the Middle East. If Mammoth could just get a hookah bar and some belly dancers everything would be just right with the universe. Since we can’t have a hookah lounge I guess I can settle with the go-go dancers.