Brandon Sheaffer plans to teach English and shredicate while in Kyrgyzstan for the Peace Corps. (Photos courtesy Sheaffer)

“People in this town seem normal but often have amazing stories. I feel you need to have amazing experiences in order to have really anything to say,” claims Brandon Sheaffer as he sits crouched over an over-sized atlas at Looney Bean. In a few moments Sheaffer points to a little orange blob on the map that is Kyrgyzstan. Even with his finger pointing directly on the spot it’s not easy to find.

“I expect to have my expectations shattered,” says the 32-year- old Mammoth resident, who on March 26 will be on a flight to Kyrgyzstan where he’ll began a three year project teaching English to seventh through eleventh graders through the Peace Corps.

Sheaffer is a familiar face in Mammoth. Arriving in 2000 fresh out of Camp Hill, Pennsylvania, he has worked everywhere from Minaret Sports (now known as P3), Whiskey Creek, The Fifty Center, as a coach for the Mammoth Mountain Snowboard team, and as a Forest Service firefighter in the summers.

You might be asking, “Why the hell would anyone want to go to Kyrgyzstan?” If you find yourself in The Base Camp bathroom you’ll find a small picture of a tanned girl in Nicaragua. “A few years back my friends Daniel Beymey and Dave Metres took off to Nicaragua with the Peace Corps,” Sheaffer says, “They came back and they seemed the same but they just had so many crazy stories, they were tan, they spoke fluent Spanish, they were different. I admired them.”

With no dog and a long term girlfriend finally out of the picture, Sheaffer decided this was the perfect time to make a move. After getting accepted by the Peace Corps, preparation for this trip has consisted of piecing together bits of information from online sources like Wikipedia, Lonely Planet and Facebook groups. But on arrival Sheaffer will have three months of official training and will then be sent to a random town where he will be paired with a Kyrgyz teacher. Once settled in, he and his colleague will then tag team English lessons, while he tries to learn the native language (kind of a Spanglish of Kyrgyz and Russian). 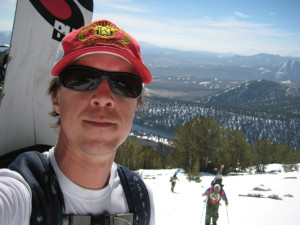 Sheaffer heads out for his Peace Corps adventure on March 26.

A small town called Karako sits next to a central mountain range called the Tien Shan (Mountains of Heaven) this is where Sheaffer hopes to be placed. Though he has no say in his teaching location, Sheaffer is optimistic that when they see him arrive with his snowboard in hand he’ll be sent to the mountains.

Though teaching will be his primary focus, every Peace Corps volunteer has to have a secondary project.  Since Sheaffer comes from a ski town, why not introduce a little shredicate? Bringing over donated snowboard gear from families of the Mammoth Snowboard team, Scheaffer hopes to introduce the sport he loves to the local youth.

Skiing and snowboarding in Kyrgyzstan have seen some exposure as of late, and are considered viable sources for community-based tourism for the country. Scheaffer wants to set up a network to get Kyrgyzstan’s youth used ski and snowboard gear from the United States. “Eco-tourism is something the country is very interested in, and that’s something I want to get involved with.”

But Scheaffer doesn’t just plan on lugging over tons of mountain gear. “We’re supposed to share some American culture with them, and skiing and snowboarding are a big part of where I come from,” says Sheaffer, “I’m probably going to bring over a few copies of the Sheet, some Lost episodes and some snowboard movies.”

You can follow the adventures of Sheaffer at his blog brandonsheaffer.blogspot.com and for information on donating ski or snowboard gear contact bsheaffer@gmail.com