You know you’re burnt out on Mammoth politics when you’d rather cover a candidates’ forum in Walker versus attending a Mammoth Lakes Town Council meeting closer to home.

That’s just what happened Wednesday. This was the first real forum for County candidates so I wanted to get a firsthand look.

And the funny thing is, I think Geisel and I got home at just about the same time.

So this is what I learned.

District 4 Supervisor candidate Renn Nolan is bored by retirement and has repainted every room in her house. Is boredom a qualification for office? I don’t know, but by the time Renn actually got around to actual county issues, her opening three minutes had expired and she had to sit down. The one issue she did mention was water, and since my wife’s constantly harping on me to hydrate, I got up and drank some.

Candidate Bobby Tems is also apparently bored by retirement (he retired in October). He didn’t have command of the issues or even of county geography. He did, however, bear an uncanny resemblance to Will Ferrell in Ron Burgundy: Anchorman.

I see District 4 as a two-horse race. On the one hand you have Tim Hansen, a classic, grizzled, smart, tough old buzzard who’s been active in local environmental debates and stepped forward to defend Tom Crowe during the debate with State Parks over Crowe’s boat tours.

And then you’ve got Tim Fesko, owner of the Meadowcliff Resort, who was extremely well-versed on every issue and has served on the Antelope Valley Regional Planning Advisory Committee (RPAC) for a decade.

Hansen, a staunch fishing supporter, said that fishing is the number one element of the north County economy. “If we don’t have fishing, we don’t have nothing,” he said. And he’s outraged at the Center for Biological Diversity for disrupting this year’s opener by “using little animals to get their way.”

Fesko reiterated the need for more spending on marketing. “Tourism doesn’t get a big enough slice of the County’s budget. We need to double the marketing budget,” he said.

In the Sheriff’s race, well … in the 90 minutes I sat through, no one asked a question of either Sheriff Rick Scholl or challenger Doug Northington, indicating to me that people are quite satisfied with the job Scholl has done in his first term. As I tweeted from the meeting, “No one cares about the Sheriff’s race. Same faces from four years ago. Scholl won. Isn’t this settled?”

As for the three-way battle for Superior Court Judge, I’d give round one to Mark Magit. No knock on fellow candidates Randy Gephart and Therese Hankel, but Magit just seemed a little better prepared. His opening statement was perfectly timed to fit within the three minutes allotted (indicating he’d actually rehearsed it) and although I can’t prove it, it appeared he must have asked Dick Padgett to lob him a softball question.

The question regarded each candidate’s experience in interfacing and working with law enforcement.

This allowed Magit to highlight his experience working as an Assistant District Attorney.

Turns out that Magit worked a case with Padgett while Padgett was a warden with the California Dept. of Fish and Game. That’s why I thought it may have been a set-up.

The County candidates square off in a forum sponsored by the Mammoth Lakes Chamber this Tuesday. That forum begins at 5 p.m. in Suite Z in the Minaret Mall.

In a press release issued late Thursday, Southern Mono Healthcare District CEO Gary Boyd outlined recent restructuring, which has resulted in staff reductions at Mammoth Hospital. According to Boyd: “We have had to make some very difficult decisions, and determined a reduction in staff costs could not be avoided. Although we made staffing reductions last summer by way of voluntary separations, we need to make additional adjustments to respond to our volume reductions and our foreseeable continued economic environment. At this time, in order to address these concerns, Mammoth Hospital is implementing an organizational restructuring plan, which includes reducing the management team by nine positions and eliminating a total of 14 positions in the organization.

In the current economic climate, we must address cost reductions to remain a viable organization. Mammoth Hospital will continue to review and evaluate cost saving measures on a regular basis to provide quality medical care on a cost efficient basis to our community.

This year our inpatient volume is 15 percent lower as compared to last year, and we have seen reductions in our ancillary services. The reduction in volume is not unique to Mammoth Hospital, as we have watched many hospitals across the country face the same issues due to the current economic conditions and reductions in reimbursements from third-party payors, such as insurance, MediCare and MediCal. Mammoth Hospital is achieving its financial goals this year. One such item is cash reserves. We have about 91 days in cash reserves today compared to about 45 days this time last year. Our goal is 120 days.

We are making these changes now in anticipation of a continuation of decreased reimbursement next year and to stay on target to meet our financial goals in the next fiscal year.

All of the individuals affected by this restructuring have been good staff members and their many years of combined service to the hospital are very much appreciated by us and the community.” 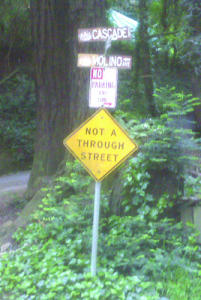 Not so happy trails

I took a short vacation in the Bay Area last week and stayed in Mill Valley for a few days.

I learned that there was a hiking trail that led from town center to the ocean, and I thought that would be cool, so I tried it.

Too bad the signage was terrible. The message was simple: Yes, we advertise our trails, but we’d really rather take credit for them without you actually walking through our neighborhoods.

The “Dipsea steps,” which take one through a Mill Valley residential neighborhood to Tamalpais State Park and Muir Woods on the other side of the hill were marked by one 2” by 12” weather-beaten sign which must have been 35 years old. You have to walk past a sign telling you “Not a Through Street” to reach the public trail.

And that’s it. There are three or four street intersections on the way up the steps. At each intersection, there was no sign telling you to go right or left. I would usually wait for a local jogger and follow them.

I’m not sure what the female joggers thought about that. It tended to pick up their pace.

It’s been a while since we last heard from Praxis executive Michael Ort on the status of the Digital 395 broadband infrastructure project. Earlier this year, the $100 plus million project was turned down for $85 million in grant money from President Barack Obama’s American Reinvestment and Recovery Act, but mostly on a technicality and was asked by Capitol Hill insiders to reapply. Ort turned in a second application in late March.

Good news doesn’t travel fast in government, but Ort said Wednesday afternoon that on May 3 Governor Arnold Schwarzenegger submitted recommendations for Broadband project funding, and Digital 395 was one of three infrastructure projects listed among the final nine that were “highly recommended.”

In addition, State Senators Padilla and Dutton (respectively Chair and Co-Chair of the Utilities, Communications and Energy Committee) recently sent a letter to the bipartisan California Congressional Caucus supporting broadband initiatives. In the letter, D395 was listed as the sole example. It’s also reportedly gaining support among federal legislators on both sides of the aisle, who are pushing it in the corridors of power, all the way up to and including the Oval Office.

“Don’t give up on us, Eastern Sierra; we’ve still got fresh powder,” Ort told The Sheet.